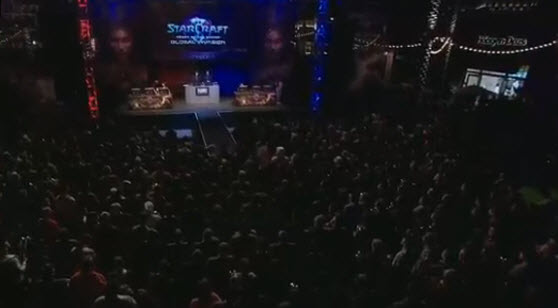 Blizzard Entertainment has launched its StarCraft II: Heart of the Swarm expansion to thousands of fans around the globe tonight. If you’re locked out of SimCity, the always-connected game with connection problems, you might just be moving on to Heart of the Swarm. 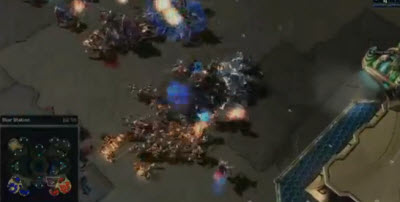 The real-time strategy sci-fi game has millions of fans, and now they’re gathering at midnight store openings as sales go live. Twitch, the live game streaming channel, broadcast a big event (pictured above) where fans gathered to watch live tournaments played by professional gamers. Altogether, Twitch planned to stay on the air for 21 hours in a row, with a broadcast hosted by e-sports personalities Sean “Day[9]” Plott and Mike “Husky” Lamond.

The launch events are taking place in the U.S., France, Australia, South Korea, Singapore, Taiwan, Russia, Brazil, and Mexico. They started in the early evening and lasted until the stroke of midnight. Thousands of stores opened at midnight, and Blizzard held nine official launch events. Blizzard executives attended one in the Irvine Spectrum Mall, just down the street from the company’s headquarters in Irvine, Calif.

The expansion title picks up the story where StarCraft II: Wings of Liberty ended. Sarah Kerrigan, a former Terran ghost warrior turned into a Zerg Swarm commander, seeks to reunite the Swarm and take revenge on Arcturus Mengsk. Players join Kerrigan, the Queen of Blades, in her quest. The standard edition of Heart of the Swarm costs $40, and the collector’s edition goes for $80. The latter includes a soundtrack CD, behind-the-scenes video, and a 144-page art book. The game itself has 20 campaign missions, features multiplayer combat, and includes a bunch of new weapons such as Terran Hellbats, Zerg Swarm Hosts, and Protoss Tempests.

Heart of the Swarm will be hot on the e-sports circuit, giving a lot of competition to Riot Games’ League of Legends. The Blizzard game will be featured at the upcoming Major League Gaming Winter Championship in Dallas. Here’s a technical post on how to install the game.