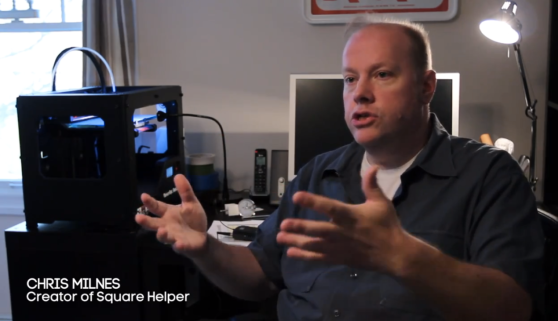 MakerBot has a problem: While the 3D printer maker has done an unparalleled job of pitching its devices as toymakers, their status as moneymakers is still a dubious one.

That’s a big deal. The Replicator printer costs $2,200, which is a lot of money to put into something that won’t spit any cash back out.

But the 3D-printer-as-moneymaker model does have its adherents. One example is the business built by Chris Milnes, the creator of the Square Helper. A tiny 3D-printed widget, the Helper was built for a small but significant job: to prevent Square’s card reader from spinning in its headphone jack. 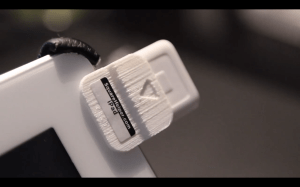 Above: The Square Helper is tiny, but significant.

The idea is simple, but it’s already proven to be pretty popular: Milnes says he’s already sold over a thousand of the things, which, at $8 each, represents a pretty decent business for such a tiny invention.

“This is a huge shot in the arm for a single entrepreneur guy from New Jersey doing this,” Milnes told me.

Unsurprisingly, Milnes’s story is a popular one at MakerBot. At CES this year, CEO Bre Pettis didn’t spare any opportunity to brag about the widget, and Milnes is set to talk about his experiences at MakerBot’s Manhattan store later today.

“If they can tell someone ‘you can make dollars with this machine tomorrow’ — well, that’s a great sales pitch for them,” he said.

While services like i.Materialize already let designers sell their 3D creations, that model is a bit different from entrepreneurs running their own 3D printers all day and selling their products directly to consumers. There’s no middle man, and printer owners find themselves thinking a lot like factory owners tend to: How many objects can I print on a single printer per day? Do I need to scale up to multiple devices?

Say hello to the future of manufacturing. “This idea of ‘printer to retail’ is rare now, but it won’t be tomorrow,” Milnes said.