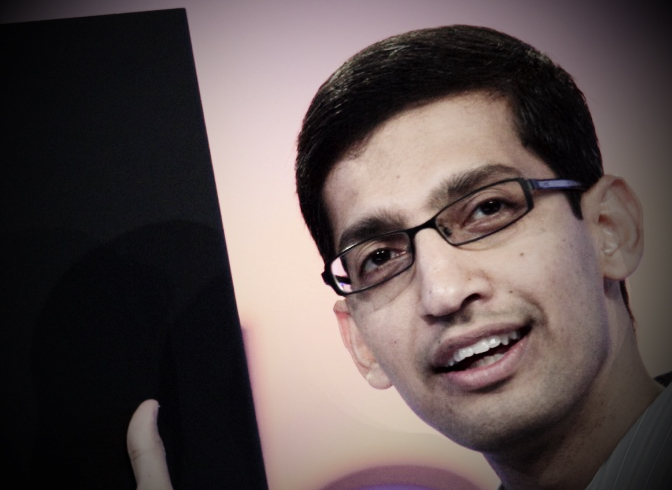 Android founder Andy Rubin is stepping away from the mobile OS and moving on to other projects at Google. In his place is Sundar Pichai, who will now juggle a confusing array of roles that include Android and Chrome OS.

In a blog post, Google CEO Larry Page writes, “Having exceeded even the crazy ambitious goals we dreamed of for Android — and with a really strong leadership team in place — Andy’s decided it’s time to hand over the reins and start a new chapter at Google.”

Pichai will now head up Android as a division inside Google. Born in the southernmost part of the Indian Peninsula, Pichai got a master’s from Stanford and a Wharton School MBA to boot — an educational background that puts him on par with his Ivy League colleagues at Google.

He joined the search company in 2004, working on Google Chrome, Google Maps, and Gmail. He was the primary party responsible for Google Drive and Chrome OS as well. He’s a relatively familiar face to developers, who’ve seen his work and watched his announcements on the Google I/O stage or at the company’s headquarters in Mountain View, Calif.

When we’ve seen him in his element, talking to developers about the products he’s built or helped build, he has the easy mannerisms of an übernerd who’s doing what he loves and proud of what he’s made.

Here’s the young executive talking about Chromebooks and Chrome OS in 2010:

Some on the web have expressed concern over Pichai’s panoply of activities at Google, suggesting that the new executive appointment points to a Chrome OS/Android technological merger. We must point out the utter ridiculousness of this speculation.

Android is a Java-based mobile operating system and application ecosystem for tablets and smartphones and embedded computing; Chrome OS is a browser running on Linux. Chrome OS is not merging with Android, people. Anyone who suggests otherwise needs to get a computer science degree as penance.

Rather, we can imagine that Android could eventually replace Chrome OS for smaller computers or notebooks. Or that Chrome for Android merges with the Android web browser (Google has pretty much confirmed as much to us in previous conversations). But a Chrome OS-Android merger? It just doesn’t make sense, technologically.

Like many C-suite and SVP-level executives (Pichai is the latter), he will oversee managerial teams and general decision-making for Chrome OS, Android, and the other products in his care while letting the current Android team continue to do their jobs and do them well. If anyone is capable of juggling these divisions and still keeping them separate, it would have to be someone as well-educated, experienced, and innovative Pichai.

The more interesting question, in our minds, is this: What in the world is Andy Rubin working on now?

Our Google sources are playing this one more mum than usual, so we’ll have to wait and see exactly what news comes next from the Googleplex.