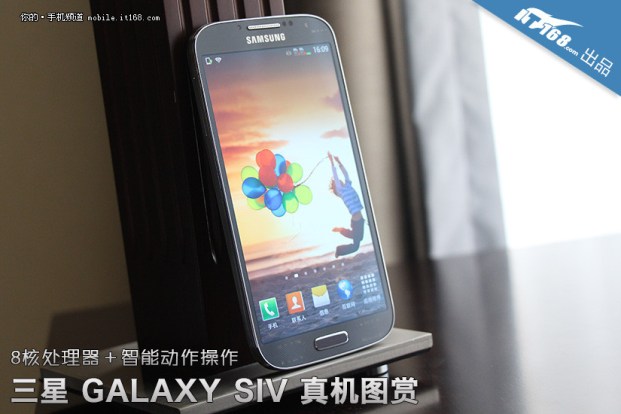 Whatever surprises Samsung had in store for the launch of the Galaxy S IV later today have likely been spoiled by this latest round of leaked pictures and videos.

The latest photos show a device that looks a lot like the Galaxy S III and Galaxy Note 2, something Samsung has already hinted at. It’s a shame that Samsung didn’t change up its plastic design in any significant way — as it simply makes the Galaxy series feel cheaper than the iPhone or HTC’s new lineup. Still, Samsung fans certainly won’t be disappointed by the lack of a bold new style.

A Bloomberg report from yesterday revealed the phone would come with a 13-megapixel camera, a 5-inch screen (which has been expected for some time), and a quad-core Qualcomm processor. The photos below also show the phone running an eight-core Samsung Exynos CPU. Rumors say international versions of the phone will get the Exynos CPU, while the U.S. will get the Qualcomm chip (which comes integrated with LTE).

While we previously heard that the phone would ship with eye-tracking to help scroll through text, more recent rumors dismissed that notion. One of the videos below shows off a feature that could be related: SmartPause, which pauses videos when you stop looking at the screen. (I wonder if this is a significant problem for smartphone users or if Samsung’s just trying really hard to differentiate itself.)

Far more interesting than SmartPause is a video showing off a new floating touch feature, allowing you to hover your finger over the screen to interact with it. Samsung originally debuted this feature with the Galaxy Note 10.1 and Note 2, though it required a stylus. It lets you do things like preview photos and videos without actually opening them, or take advantage of “hover” design elements on websites (which normally require a mouse). Being able to hover with just your finger would be a significant smartphone interaction leap for Samsung. Also, it just looks freaking cool.

Check back later today for live coverage of the Galaxy S IV’s launch.