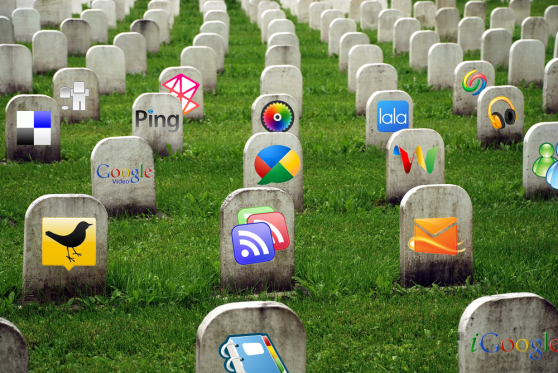 Google Reader is dead, and, somehow, I’m just fine with that.

For years, Reader has been the primary means by which I follow news from the sites that I care about. Instead of going to a website directly, I go to its feed on Reader and tap “J” until I find something I feel like reading. Real simple.

But that’s not the way Google wants me to access the web — or at least not a way it can profit from it. The Internet is changing, man, and kids want their news dished out in Tweets, Likes, and +1’s (or so I’ve heard). As much as I hate to admit it, there’s just no place in this brave new world for us RSS dinosaurs.

I’m not happy that Reader is dead, but I’m happy that Google killed it.

If anything defines how I approach technology, it’s my general skepticism towards ecosystems of any kind. I own a Macbook, but refuse to buy an iPhone. I use a rickety old Nexus S, but use almost none of Google’s apps on it. This may make my digital life a tad harder, but it keeps me flexible and prevents me from digging myself too deeply into the ecosystem of any one company. (Seriously, I don’t know how you iPhone + iPad + MacBook people do it.) 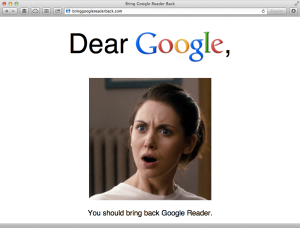 Above: Somehow I don’t think this will convince Google of much of anything.

How this relates to Reader should be pretty clear: Google’s decision to axe the service is a transparent attempt to get more people like me using Google+ — but it’s more likely to push me away. And I like that; it forces me to find a non-Google alternative. And I love non-Google alternatives.

In fact, the first thing I thought when the Reader news dropped is what the move means for services like Gmail. Maybe there’s more money in email services than there is in RSS readers — I don’t know. But I do know that, at this point, I would be completely unfazed if Google decided to shutter Gmail in an effort to fold its functionality into Google+ as well.

Sure, us vocal power user types would wail and holler and make petitions in response, but that wouldn’t bring Gmail back –just how it won’t bring Reader back, either.

This isn’t unique to Google, of course. Both Twitter and Facebook have also pretty clearly shown that they’re willing to deal with user outcry if it means improving their core product in the way they see most fit. Twitter, for example, just recently announced that it was killing the iOS and Android versions of Tweetdeck, another popular app for the power user crowd. And Facebook — well, we already know what that company thinks of your opinion. 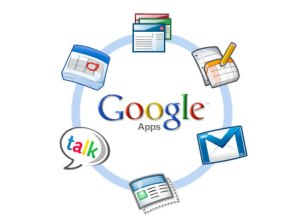 Above: This is Google’s world, or at least some of it.

Obviously, a lot of this ties into that whole “if you’re not paying, you’re the product” argument (which is true, but trite by this point). But the larger takeaway for me is this: You can no longer trust Google (or Twitter, or Facebook) to act in your best interests. Not only are you not paying for this stuff, but you’re in the tiny (but vocal!) minority of power users not paying for this stuff.

But this is bigger than just cash — this is about vision. See, all of these companies have their own visions of how you should be browsing the web, and they’re all trying as hard as they can to box you into those notions. This has been true since forever, but it’s become more true now that everyone’s stepping on everyone else’s toes. Twitter’s doing music discovery. Facebook’s doing local search. Google’s doing social networks (and hardware). Everyone has their hand in someone else’s cookie jar, and companies are being forced to move fast in response, knocking over anyone who stands in their way (i.e., you).

That’s a sad reality, but it is, in fact, reality. If you really want to be happy and well-adjusted as a digital person in 2013, stop trying to hold tech companies accountable for product changes that they have no reason to be held accountable for. In the world of free web apps, your wails of dissent mean next to nothing. But you already know that.