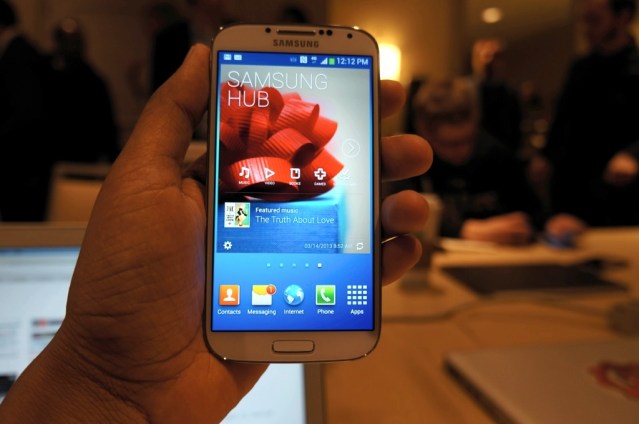 How do you continue to stand out in the increasingly crowded Android smartphone market? For Samsung’s Galaxy S IV, it’s by focusing on some intriguing exclusive software.

Samsung officially unveiled the phone tonight at Radio City Music Hall in New York City, following plenty of leaked photos and videos (which proved accurate). But even though we basically knew what to expect, Samsung still managed to impress.

Check out our hands-on with the Galaxy S IV, as well as a detailed play-by-play of Samsung’s wacky launch event and our coverage of how this phone shows Samsung may be building out its own Android sub-ecosystem like Amazon has done.

The Galaxy S IV sports a sharp 5-inch Super AMOLED display with a 1080p resolution and 440 pixels-per-inch. When put next to the Galaxy S III, which has a 4.8-inch display, 720p resolution, and 306 PPI, it appears brighter and significantly sharper. It’s powered by an 8-core Samsung Exynos processor, 2GB of RAM, and Android 4.2.2. Jelly Bean. It also packs in a 2,700 mAh battery — significantly larger than the Galaxy S III’s 2,100 battery.

The phone looks very similar to the Galaxy S III and Galaxy Note II (check out some comparison shots below), but Samsung says it’s lighter and more solid than its predecessors. Even though Samsung is still relying on glossy plastic, the Galaxy S IV’s polycarbonate trim around the side of the phone looks like it has a more premium feel. 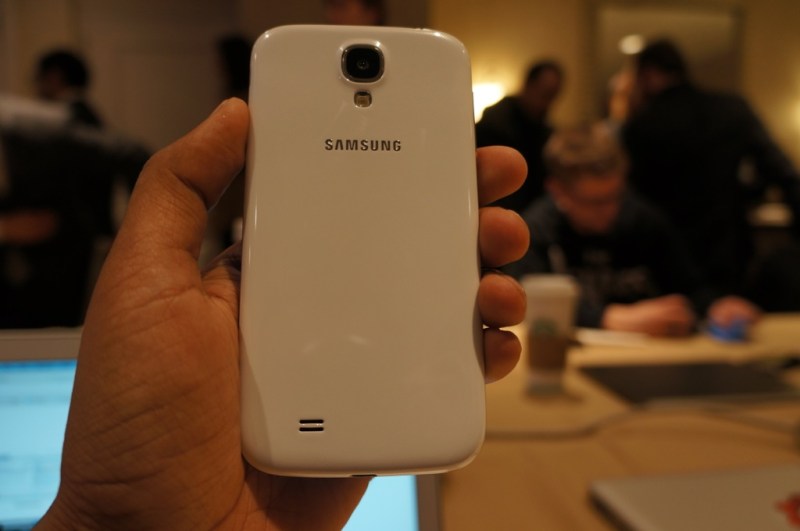 While it’s certainly a hardware powerhouse, the real focus for Samsung this time around is clearly in software. With a new feature called AirView, the Galaxy S IV lets you simply hover your finger over an item on the screen for more information, like previewing an email or photo. It’s an evolution of the hover feature Samsung previously had in its Note tablet and smartphone, but that required a stylus to activate. Samsung isn’t divulging how exactly your fingers can perform the same sort of magic.

You can also wave your hand in front of the screen to control certain apps, which could be a particularly important feature while driving, or if you need to do something as simple as switch to a new tab in a web browser. The Galaxy S IV accomplishes this with its proximity and motion sensors (it’s similar to the hands-free option in Waze).

Just like the HTC One, the Galaxy S IV is a sign that hardware design has somewhat plateaued when it comes to smartphone design. Most smartphones end up running similar hardware, and they’re all moving to sharp and large screens (which isn’t necessarily a good thing). But to truly stand out and make consumers pay attention, you need interesting software. 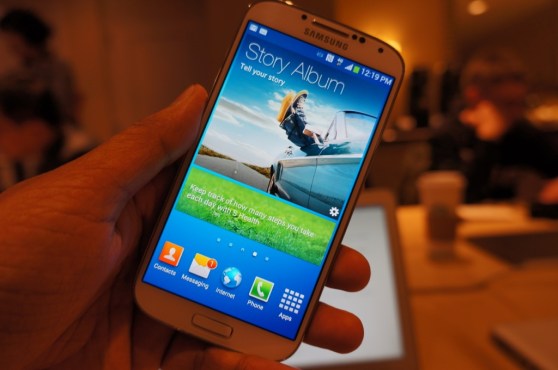 Take the Galaxy S IV’s 13-megapixel camera, for instance. That’s a decent resolution, but what’s more interesting is how it’s buoyed by an array of new (and surprisingly useful) camera software. Thanks to its powerful processor, the Galaxy S IV can actually use both its front and rear cameras at the same time, allowing you to take photos and videos without actually getting left out. You can appear as a goofy floating head, or split-screen.

There are also a few new camera modes: Sound and Shot, which lets you take nine seconds of audio with a photo; Drama Shot, which combines a burst of pictures into a single image (think a series of shots featuring someone diving into a pool); and Cinema Photo, which lets you animate portions of the image and turn it into an animated GIF (you can practically hear Cinemagram gearing up its lawyers). And to keep photobombers at bay, there’s a an Eraser Shot mode that can instantly remove unwanted people from an image.

As previously rumored, the Galaxy S IV also has new features that automatically pause videos when you look away from the screen (SmartPause) and automatically scroll up or down depending on how you’re looking at and tilting the phone (SmartScroll). Both are followup features to the Galaxy S III’s SmartStay, which keeps the display awake while you look at it.

A Samsung representative noted that the SmartScroll feature doesn’t depend entirely on your eyes, contrary to previous reports. Instead, it uses a combination of your head placement and how you’re holding the phone.

Other features: Health and a nifty universal remote

Samsung is also focusing on health in a big way with the Galaxy S IV. The phone has a pedometer built-in that can track your steps and stairs climbed, and it also has a humidity and temperature sensor. You can also keep track of your eating habits with the phone, which it will use to spit back some guilt-inducing caloric data. Samsung is also getting into the fitness accessory arena: A new S-band activity monitor, body scale, and heart monitor will be able to keep track of your health. All of the accessories connect to the Galaxy S IV over Bluetooth.

Rounding out the features, there’s a new S Translator app that will be able to translate text, which will support 10 languages at launch. There’s also an IR blaster built into the Galaxy S IV, which lets you use it as a universal remote together with some built-in software. Samsung has included similar functionality in its most recent tablets, and it definitely looks like the company is going to focus even more on making its devices useful second-screen companions this year.

So when can you actually get your hands on this beauty? Samsung isn’t talking pricing yet, and so far the company is only giving us a vague availability time-frame of “sometime in the second quarter.” It’ll be available in the U.S. on AT&T, Verizon, Sprint, T-Mobile, U.S. Cellular, and Cricket.