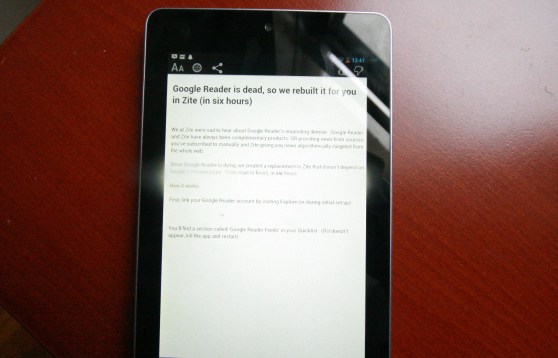 The Google Reader empire is about to explode into a million pieces — and every app under the sun is trying to scoop them up.

One of these apps is custom news magazine Zite, which yesterday announced its plans to integrate Reader’s functionality in a major way. With the integration, Reader users can add their feeds directly to Zite, not only allowing them to read their feeds within the app, but also giving Zite’s impressive recommendation algorithms more data to work with.

Reaction to the news was impressive. According to Zite CEO Mark Johnson, the post is already the most popular one Zite’s blog. Clearly, a lot of people care about this whole Reader thing.

“Frankly, we’re shocked at how much people care. But we’re obviously also really pleased,” Johnson told me this afternoon. 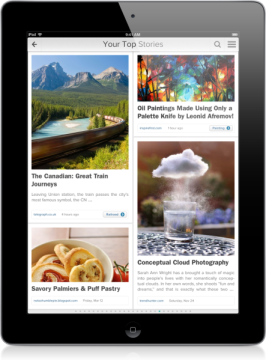 While the idea is promising, the implementation is rough so far: There’s no folder support, for example, and Zite doesn’t yet allow for ongoing syncing with Reader, which is a major omission. Still, the move is an interesting and pretty significant peek into the uncertain but increasingly exciting post-Reader world.

“It’s definitely a first version. We wanted to do something quick for our customers. We’re already looking at where to go next,” Johnson said.

The combination is an interesting, if slightly uncomfortable, mix of two services that couldn’t be any more different: If Reader is the deafening roar of a city, Zite is the intimate whisper of a lover (my words, not Johnson’s). But it’s that combination that could be a hallmark of the post-Reader world, which is sure to be home to quite a bit of experimentation like this.

“With Reader there’s an overwhelming volume of news. We’re using our personalization tech to tame your feeds,”Johnson said.

If you’re a Reader power user, that’s the kind of thing you’ve been groaning at all week. After all, the reason Reader worked in the first place was because of the flood of information. Is was ugly, it was inelegant, but it was simple, and it worked.

Johnson recognizes that, but he also argues that the Internet has left Reader behind.

“Lets face it. Reader has been the same for a long, long time. That’s not where you’re seeing innovation in newsreading. I’m excited that there are so many new creative solutions popping up now,” he said.

But here’s the question you probably want an answer to: Will Zite replace Reader for power users? Not exactly.

“We’ve got a great use case of the middle ground and the average users. I hope they come to Zite and see that the personalization system works for them,” Johnson said. Translation: Nutso power users will probably have to look elsewhere.

But, here’s a ray of hope: Zite is also considering building a web interface for editing and possibly(!) reading your beloved feeds: “We’re strongly considering that, but it’s further off,” Johnson said.

There may be some hope yet for this Reader diaspora of ours.