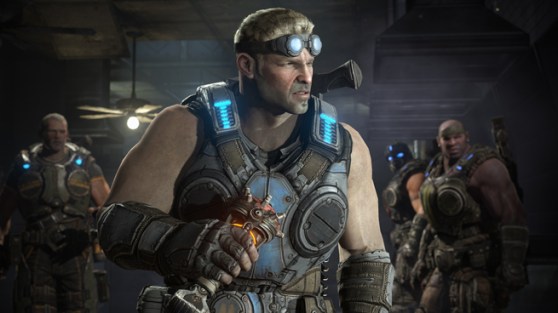 I think we can all agree that Damon Baird is, for all intents and purposes, a sentient dick move.

The least meatheady member of Delta Squad in the billion-dollar Gears of War franchise, Baird somehow turned the voice of reason into a non-stop whine. He mixed a solid background in “complaining about everything” with a side of “brag up minor accomplishments” and threw in a hint of “make someone else do it, I’m too smart.” In the brutal, planet-wrecking war between humans and the ruthless subterranean Locust, Baird was the guy people put up with — usually — because they had to, not because they wanted to, and we laughed at his many frustrations. Baird might’ve been Mr. Fix-It to series heroes Marcus and Dom, but he was comic relief to us.

Gears of War: Judgment (releasing March 19 on the Xbox 360) casts him as the lead protagonist. Consider that something of a metaphor. For this entry in their powerhouse franchise, original developer Epic Games kicked things over to a subsidiary, People Can Fly, most recently known for 2011’s amusingly profane but unremarkable shooter Bulletstorm. From the outside, it’s an interesting fit. Two secondary players get some time in the spotlight to tell their story … something I generally approve of.

But y’know how “story” has never been Gears’ strong suit? 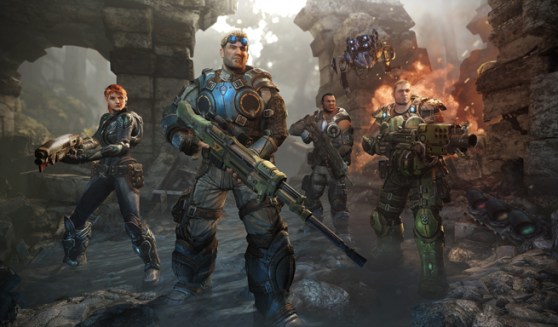 Set years before the first Gears of War, Judgment is the heartwarming story of how Baird got his groove taken away. He and his command, Kilo Squad — made up of fan-favorite Augustus “Cole Train” Cole and newcomers Sofia Hendrick and Garron Paduk — arrive already in chains, on their way to an amusingly blunt kangaroo court. The game then flashes back to explain why the presiding judge, General Loomis, wants to put on this farce just so he can legally kill them.

So yes, it’s a flashback-within-a-prequel, and that largely applies to the gameplay as well. Judgment doesn’t stray one inch from the cover-based, grub-killing shenanigans from Gears of War 3, right down to the loading message pop-ups, menu navigation, and visual cues for nailing an active reload (thus boosting your firepower). It still works, and a few small tweaks even slims the controls down a bit. People Can Fly jettisoned the pistol sidearm nobody ever used in favor of a two-gun package and modified the controls accordingly, also making it far easier to use grenades on the fly without having to select them first. Good changes all around.

Less good? The always-reliable Hammerburst lost both its auto-fire and its iron sights aiming, flipping it from best to worst for no reason I can figure out. To make up for it, three new additions make it into the Gears arsenal, two of which are standouts. I enjoyed planting live grenades on enemy heads with Booshka, a down-and-dirty launcher, but the sniper-lite Markza became my go-to gun. It took me a bit to dial into Markza’s dark charms, but true love eventually blossomed.

And while you still take these beauties on an 8-hour campaign, I didn’t feel the need to hug cover 24/7 this time. Between easy grenade throws and hordes of charging enemies, I probably spent more time out in the open than in all the other Gears games combined, and that made a nice change, too. It also made it easier to earn the universal currency of video games: stars. That’s right, Gears now grades you section by section, awarding experience points towards unlocks and assigning stars based on executions, dismemberments, and awards earned. It takes 40 stars to unlock a sixth, hour-long chapter called Aftermath, which flashes-forward to a side-story during Gears 3 where we catch up with some of Judgment’s survivors. Naturally, the years have not been kind.

Of course, once you hit that 40-star threshold — which you can comfortably do by mid-game — the motivation for earning starts drops away fast, save for Achievement whores and perfectionists. 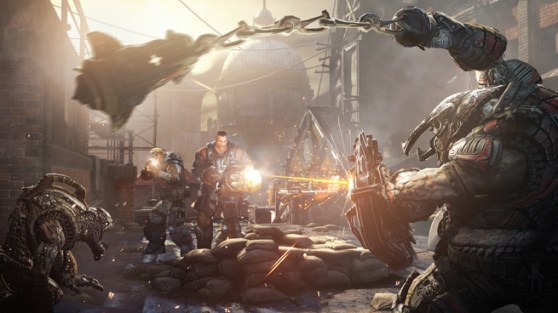 Likewise, the latest update to Gears’ online carnage streamlines the game, but not without a few major changes.

Mainly, it’s what’s missing that will annoy fans most. Capture the Leader? King of the Hill? Warzone? Execution? Dedicated Beast and Horde modes? All gone. The new headliner is OverRun, which adapts Battlefield’s Rush mode to a Gearsy five-stage attack/defend scenario. Human players guard a capped emergence hole while Locust players breach fortifications to destroy that cap, and it’s great fun in both directions. All the different Locust classes return, and now COG soldiers get classes, too: medic, engineer, soldier, and sniper.

No, those roles and their special abilities don’t exactly stretch the bounds of innovation either, but the balance of those abilities with the preset loadouts plays very well, particularly when your defenses crumble (victory goes to the team that holds out the longest), all while adding Battlefield’s tactical edge to your Gears playstyle. It’s a lean, mean game.

People Can Fly also ported OverRun’s framework over to Survival, the “Horde 3.0” mode where instead of merely surviving increasingly tough waves of enemies, you must defend the e-hole caps for ten rounds; getting pushed back starts the count over again. Much as I like objective-based games, this ruins the point of Horde, which was simply to survive as long as possible. Forget roaming the whole map. You’re stuck to that one spot. As-is, Survival simply repeats OverRun’s example without giving you a turn as the Locust.

Domination’s control-points fight make for sticky fun, and it must be noted that every non-OverRun map counts as a winner. Several let you hop aboard a mobile platform. In Rig’s case, you slip behind the mounted chaingun of a King Raven helicopter as it hops from one landing pad to the next; Gondola has map-traversing (you guessed it) gondolas. Even without those extras, I found a lot to enjoy in Library’s literary cover and long sight-lines, while Streets’ excellent verticality always kept me looking up when I wasn’t aiming downward. For team or solo deathmatches, you won’t want for good killing fields, but don’t be surprised if you find yourself sneaking back to Gears 3 to play the old-school modes the way you really want to.

And a warning: I detected a shocking amount of clipping where the target in my sights suddenly teleported to another part of the room. I hope that doesn’t bode ill when a few million players jump aboard. 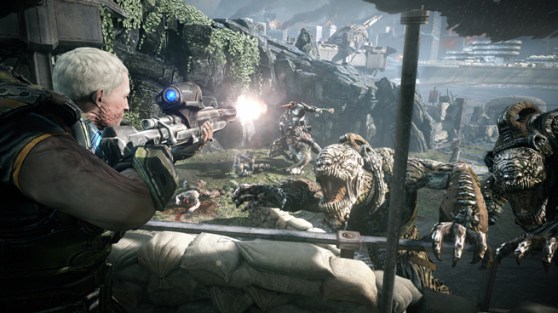 It’s got some character

With Baird in charge and the Locust War just beginning, Judgment isn’t nearly so dark and depressing as previous installments. It still knows how to twist a knife, though. Baird leads his squad through a freshly-destroyed city still draped with bright blue “Victory!” banners … a victory against Paduk’s country, as it turns out.

The flashback setup gives each member of Kilo Squad their own chapter — Baird gets three, including Aftermath — suggesting a broken Rashomon where everyone remembers the same thing. Ah, but the great Akira Kurosawa and Ryunosuke Akutagawa didn’t have an interactive medium to play around in. Judgment changes things up by letting players activate “Declassified” variants before every section of the game. These expose off-the-record details that fundamentally alter the game you’re about to play … handicapping your weapons loadout, adding a blinding fog or aim-impairing wind, putting you on a timer to escape before the saturation bombing begins, or boxing you in with enemies on all sides.

One Declassified tasks you with destroying egg caches or getting hit with more enemies as a result. I only found nine of the 10 caches before I got bored and moved onward. Believe me, I felt that consequence. I wish more Declassified options had taken this approach.

Regardless, I cannot stress enough how much activating Declassifieds improves Judgment. They finally kick the game and the gamer out of their comfort zones. Without them, the game proves almost ridiculously easy on Normal difficulty, and that makes Aftermath — which doesn’t have Declassifieds — more of a distraction than a challenge.

And that’s the big problem with Judgment.