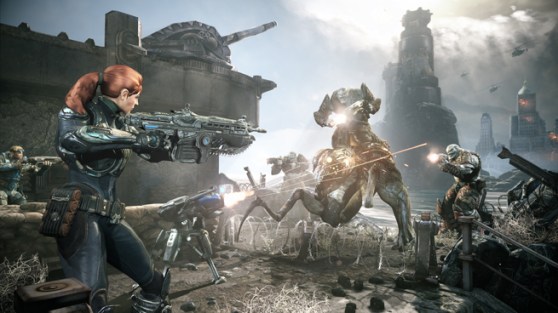 Playing through Gears of War: Judgment’s campaign feels a lot like a duller version of déjà vu. Everything about it seems recycled to the point where the game wisely lets veteran players disable most tutorials before they even reach the main menu.

None of the encounters qualify as memorable, and the few that don’t slide right out of your brain the moment they’re over get recycled ad nauseum in multiplayer. I write this having finished the campaign just a few hours ago, and I can’t describe any single battle that’s not directly related to how the Declassified setting altered it. It’s mystifying to me that People Can Fly decided to make the best parts of the game optional. But even with those switched on, the levels themselves feel more obligatory than inspired. Where previous Gears frequently built fights around a compelling idea or a tricky environment, Judgment simply dumps enemies between you and a door.

It also suffers from an over-reliance on horde-style encounters, where you hold your ground as waves of enemies kamikaze into your gunsights. Used sparingly, these would’ve worked just fine. Judgment falls back on them roughly every 25 minutes.

Arguably, the franchise can’t really stretch its gameplay out much further without becoming something it’s not. That’s fine. But it puts a greater imperative on creating new, smart, exciting situations within the established framework. Unfortunately …. 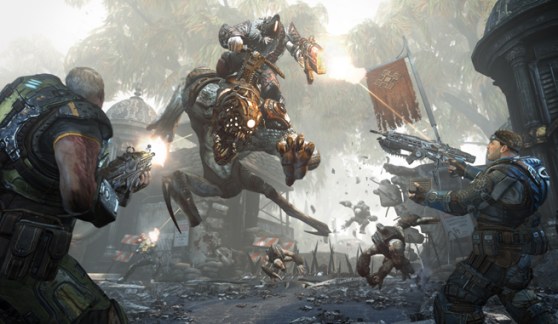 The “wow” factor is MIA

Gears always revolved around solving colossal problems in horrible ways. Those games had scope and epic challenges that we accomplished in epic ways. Nothing epic happens in Judgment. Nothing.

I wanted to fight towering, monstrous Brumaks and spider-like Corpsers. I wanted to work my way across a crumbling bridge while an aircraft carrier burned below. I wanted to shoot through a burning building while it fell into a ravine around me. I wanted to creep around a blind, bullet-proof Berserker and take her out with a Hammer of Dawn orbital laser cannon. Judgment doesn’t have a Hammer of Dawn. The one Berserker I fought didn’t give off any clues on how to beat her without it, and I had plenty of time to safely explore for a secret “here’s how you kill her!” area while she swatted at my squad. Finally, she just stopped moving, and I simply placed an automated flame turret close by until she fried. Yawn.

Even smaller moments, like spotting glowing wretches at night in the rain for the first time, put some flavor into the action. Not only does Judgment lack those “best rain ever” moments, it doesn’t even reach for them. I actually started hoping for some Ice-T stunt casting to liven things up. No dice. You’re on a walking tour of Halvo Bay. Just keep on walking. Try to pretend the end-boss doesn’t look exactly like a few dozen other things you’ve killed recently.

Minus thoughtful level designs and major set-pieces, what remains are a bunch of waist-high walls leading from Point A to Point B. It’s not terrible, but it is terribly mechanical. 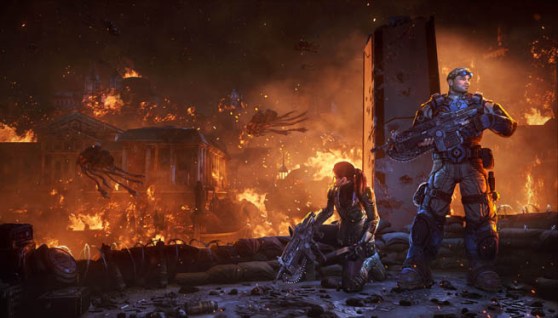 Even for Gears, the plot lacks cohesion

A lot of these complaints might not measure up if you’ve never played Gears before, but newbies will find themselves completely lost in the first ten seconds. Judgment never bothers to catch anyone up on who these people are, what’s going on, or when this takes place in the continuity unless you count reading the box copy. The new characters, Sofia and Paduk, suffer badly in his regard. It’s not really clear that Paduk opposed COG forces in a previous war until about half-way through the game, and Cadet Sofia touring her decimated school lacks the weight of Marcus returning home in the first Gears. We just don’t know enough to feel invested in her. Unless a history of adultery somehow makes you bond with a character.

Even Augustus Cole, the biggest, most boisterous weapon in Gears’ narrative arsenal, remains so uncharacteristically quiet that other characters remark on it. Who put Cole in the corner?

By the end of Aftermath, Paduk did emerge as one of my all-time favorite Gears personalities, but the overall story never makes it past the total contrivance stage. Why would a general insist on calling a time-out on conducting a war just to hold a lengthy tribunal right on the front lines even though he’s already decided the verdict? Who’d like to bet his poor decision-making skills bite him in the ass at some point?

Then there’s Baird. True, he comes off as less of a schmuck that ever before, but he doesn’t feel particularly redeemed, either. No great revelations come out of Judgment, no epiphanies, no insights. Without them, it’s tough to figure out why this story needed to be told. It just ends up being one of the more pleasant days in Damon Baird’s war, and if he’d known that at the time, he’d probably have shot himself. 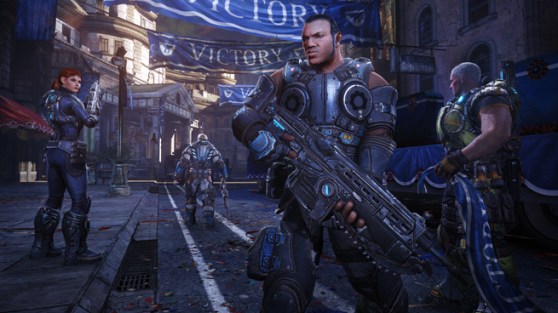 Judgment just might be the game that drops Gears of War out of the triple-A tier. It is competently done and no more. The rock-solid gameplay returns intact — virtually identical, in fact — and the Declassified options bump the entertainment value up a few notches, but the epic scope and precision level designs that elevated the franchise beyond its mechanics simply aren’t here. Similarly, OverRun’s takeover of the multiplayer, fun as it is, can’t completely compensate for an overall pullback on modes. This is a smaller game. If you’re a huge Gears fan and that doesn’t bother you, Judgment’s your huckleberry. I’ll wait until the bombast makes a comeback.

Gears of War: Judgment releases March 19 on the Xbox 360. The publisher provided GamesBeat with a retail copy of the game for the purposes of this review.