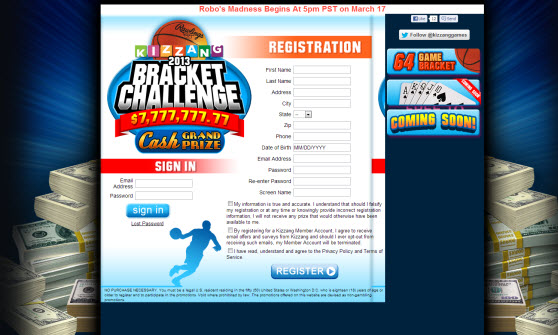 The old veterans of the video game business have been waiting for their moment to pounce, and they’re seizing upon March Madness. The new Las Vegas startup Kizzang is announcing today it will give away $7.7 million in a sweepstakes March Madness bracket game.

The company plans to give away $7,777,777.77 as a cash grand prize to anyone who gets all 63 guesses right in the March Madness basketball tournament, and the entry free for this tournament sponsored by Rawlings is — get ready for this — free. All told, Kizzang plans to give out more than $10 million in prizes for those who enter its March Madness sweepstakes. The company’s founder believes its strategy will disrupt the social game business and draw tons of players.

“Our model is free,” said Robert Alexander, founder of Kizzang and a 27-year veteran of the console game business, in an interview with GamesBeat. “We will allow our consumer a chance to become a millionaire overnight. Who is going to compete with that?”

The company is starting out with a web-based game first, combining fantasy sports, online play, and sweepstakes. The Kizzang Bracket Challenge will be open for registration from March 17 at 4 pm until March 21 until 9 am on March 29. Then Kizzy’s Chao’s Bracket Challenge will be open from March 24 at 9 am until March 28 at 4 pm. Robo’s Revenge will run from March 31 5 pm until April 6 at 3 pm. Prizes will be awarded on April 10. Kizzang will make money via advertising and sponsors, Alexander said. The target audience is expected to be big — 60 million or so play fantasy sports in the U.S. But so far, no one has really scored big in modern online sports betting games — at least the ones that are legal.

“We let people play at no cost and will offer free games for real cash and prizes,” Alexander said. “We are like sweepstakes meets Price is Right meets Publisher’s Clearinghouse meets Pandora meets my own spin.”

That might sound a bit crazy. But Alexander, former head of Game Ballers and a pioneer in games, and he wants to combine the best of fantasy sports, online gaming, and sweepstakes in a single company. The company is targeting sports consumers who are older and like to gamble. But these players are not on platforms such as Facebook. Alexander hopes they will come in droves because they like the sound of the word “free.”

“We have assembled the best team with experience in video games,” Stolar said in an interview. He helped Sony launch its PlayStation in the U.S. and then helped Sega launch the Dreamcast. He ran the games division of Mattel, and was CEO of Adscape, which Google acquired. For a time, he became the games evangelist at Google and has been a consultant at The Stolar Group, helping companies raise money.

The team has bankrolled its own operation. Bitetti is a licensing expert and brought properties like Shrek, Star Trek, Star Wars, and Pirates of the Caribbean to games. He also launched one of the first poke video games while head of publishing at Crave Entertainment. He said the company will follow up its March Madness title with a poker game. It is also likely to do a slots game.

As a sweepstakes company, Kizzang is not allowed to advertise its games as “gambling” titles. Players play for the chance to win money in a lottery.

Alexander has assembled his cast quickly. The company started 4.5 months ago and formally incorporated in January. It hired David Haag, former engineering manager at slot machine maker IGT, as vice president of engineering and games. Priscilla Eshelm is chief revenue officer. The company now has 17 employees. Together, the executive team has 127 years of experience in games. By the end of the year, Alexander expects to have more than 100 employees.

“Everyone is chasing the real-money gambling business,” said Alexander. “We are not. We’re the ones who will slap them in the face and give them a dose of reality. I am writing the check to the winner here. All the balls are on the table. It’s serious money. We will be very successful with tens of millions of consumers a day. Or we will go on to the next thing.”