Look out, game developers, because Pixar talent is moving into your turf.

Five Pixar artists have formed Steel Wool Games, according to Edge. The new developer, which they have termed a side company, has already begun work on its first game, Flyhunter, which is due this summer for unspecified platforms. 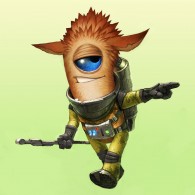 Blankenship worked as an animator on Brave. Dayton was an artist on Toy Story 3. Hoffman performed modeling duties on the Pixar TV series Mater’s Tall Tales. Qualtieri acted as technical director on The Incredibles. Topolsky was the global technology coordinator on Brave.