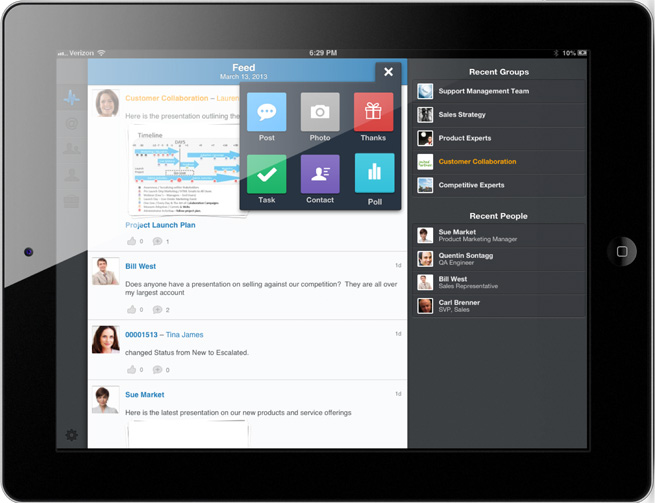 “Companies are social at their core, and Chatter can be the heart of that,” Michael Peachey, Salesforce’s senior director of solutions marketing, told VentureBeat. “Legacy CRM software isn’t social or mobile. This next generation of Chatter sets the bar for mobile and social CRM.”

Chatter competes with Microsoft’s Yammer, Jive Software, Moxie Software, and Tibbr to help big companies with social networking and collaboration. Salesforce claims Chatter is the backbone for nearly 200,000 active business social networks. Chatter helps Salesforce compete in social, but you can’t really own that arena now unless you have robust mobile apps to support it.

Today’s update sees the Chatter’s mobile apps updated to help with Salesforce’s push to own social and mobile and to be a “customer company.” The Chatter applications have received two major updates, so now you can:

“This makes it so you can see all the context of the account and your key customer data in one place,” Peachey said. “You want to take action in less than 60 seconds, and we’re making that happen.”

Both features seem important to making Chatter more powerful on mobile devices. The “publisher” especially is critical because lets you post polls for your colleagues or photos of whatever you can take with your iPhone or Android device. These sort of things are important for quick collaboration among mobile employees.

While Salesforce does seem to have a strong mobile push as of late, it only seems to care about equipping iPhones, iPads, and Android phones with its tools. Peachy said the company has not yet committed itself to creating Chatter applications for Android tablets, Windows Phone, Windows RT, or Windows 8.

“Our customers aren’t asking us for that today,” Peachey said.