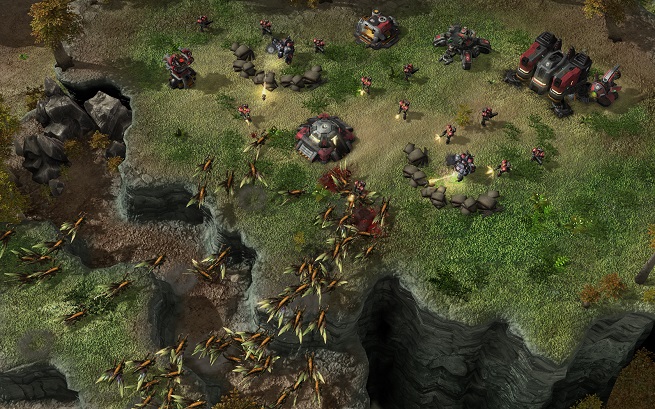 This review may contain story spoilers. For tips on playing Heart of the Swarm, please check out our guide.

StarCraft is like reconnecting with an old buddy. You might liken the series, as critic Tom Chick does, to a muscle that needs exercise lest it atrophy, but that sounds like work. StarCraft isn’t a muscle; it’s an ongoing conversation.

And even if you fall out of touch with a good friend, you’re quickly reminiscing on past times and catching up on what’s new when you reunite. And such it is with developer Blizzard Entertainment’s Heart of the Swarm expansion for the PC-exclusive, real-time strategy game StarCraft II.

Returning to this finely tuned RTS after even a short hiatus inevitably requires you to reacquaint yourself with its mechanics and systems. What’s the build order to get my “MMM ball” (a group of Marines, Marauders, and Medivacs) up and running quickly again? Is the Banshee rush still a viable opening? After having that talk, you’re ready to dive into the new stuff.

Heart of the Swarm brings seven additional multiplayer units. Aside from to the single-player Zerg campaign, these soldiers are why seriously competitive StarCraft players are salivating over picking up this expansion. 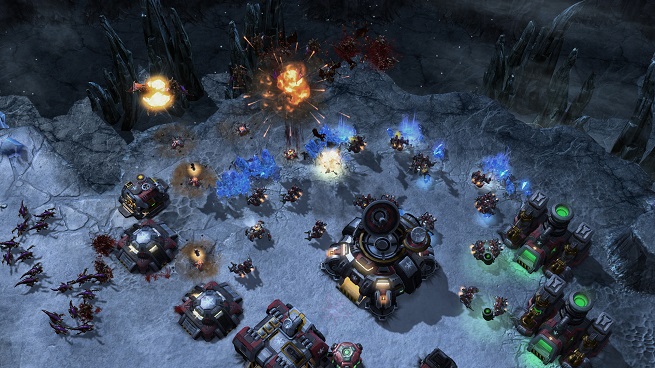 Increased tactical flexibility
The new multiplayer units — two each for the Terran and Zerg factions and three for the Protoss — easily fit into specific roles on the battlefield.

Our spacefaring cowboys now have the Hellbat and Widow Mine. The former is a heavily armored vehicle that can “transform” from a walker into a buggy. It can form a frontline barrier between your opponent and your squishier Marines and Marauders, and its flame area-of-effect attack can effectively counter swarming enemies. The Widow Mine burrows into the ground, hiding from approaching enemies, and launches seeking rockets at your foes. It can provide an effective defensive line at chokepoints and for resource gatherers.

The Alien-like Zerg can now field the Viper and Swarm Host. The former mutates from the Mutalisk, a flying fast-attack harasser, and comes with two special abilities. You can grab a single enemy unit and pull it into your army for a quick death or drop a cloud that prevents ranged fire. Used together, the Viper can help your army break through your opponent by taking out high-profile enemies quickly and suppressing the counterattack. The Swarm Host is a slow-moving creature that spawns Locusts off its back when burrowed. This unit serves as a ground-based siege unit.

The Protoss get three new troops: the Mothership Core, Oracle, and Tempest, all flying units. The three fill support roles for your main army: The Mothership Core can boost the defensive capabilities at your Nexus headquarters while the Oracle acts as a harassment unit to slow down your opponents’ economy. The Tempest is a long-range siege weapon that gives any assault additional firepower from the relative safety of your back lines.

The campaign is StarCraft’s ‘relax’ mode
While not nearly as diverse as the previous Terran campaign in Wings of Liberty, Heart of the Swarm’s Zerg focus still offers a series of varied mission scenarios. As Sarah Kerrigan, known as the Queen of Blades, you’ll fight on an ice planet that freezes units every few minutes. You’ll scout and eliminate certain marked targets before a countdown reaches zero. Sometimes Heart of the Swarm turns into an action role-playing game with Kerrigan as the hero in linear levels complete with, for lack of a better term, “boss” characters. 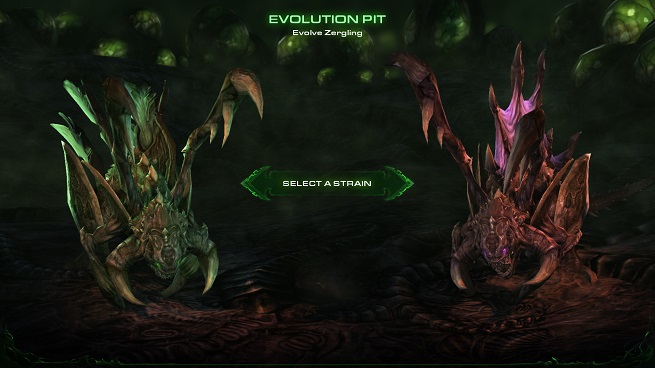 That last one provides the template for one of the more appealing side-diversions from StarCraft proper. The series has always tipped its hat at its influences (like this scene for Aliens and this one for Apocalypse Now), and Heart of the Swarm continues this tradition. Upon impregnating a Protoss researcher with a Zerg larva, Kerrigan allows the doomed enemy’s allies to beam her to an escaping starship, where the creature will burst from its host’s chest, consume those aboard, grow into an unstoppable killing machine, and quickly infest the craft to cut off its getaway.

The only thing missing is a mouth inside a mouth.

But the best thing about the campaign is that it feels like I’m scouring Blizzard’s cutting-room floor of interesting-yet-unbalancing unit concepts. Since the single-player portion has hardly ever developed past static A.I. enemy placement covering the entire map (and Heart of the Swarm is no different), Blizzard doesn’t have to worry about preserving its carefully designed competitive RTS formula. Here is where I can test-drive the Aberration, a centaur-like tank creature with pulsating purple bubbles covering its back, for instance.

I can also choose between two different evolutionary paths for all my minions, which all seem like great ideas that would horribly wreck StarCraft’s carefully tuned competitive formula. With Ultralisks, for instance, I can choose between a poison sack upgrade that bestows additional damage to each swing of their four powerful bone scythes, or I could go with an ability that resurrects fallen Ultras upon each death on the battlefield.

These are the only permanent choices I have to contend with, though. When unlocking new units, you can visit the Evolution Pit, where Abathur (whose voice and speech mannerisms are clearly modeled, in this critic’s eyes, after The Fifth Elements’ Mondoshawans) adapts the swarm to the shifting needs of its queen. You can activate one of three different abilities for each of your creatures at any given time and swap them at will. This sort of flexibility is comforting because you won’t have to replay the campaign to try other options, and I honestly can’t think of any good reason to trudge through here more than once.