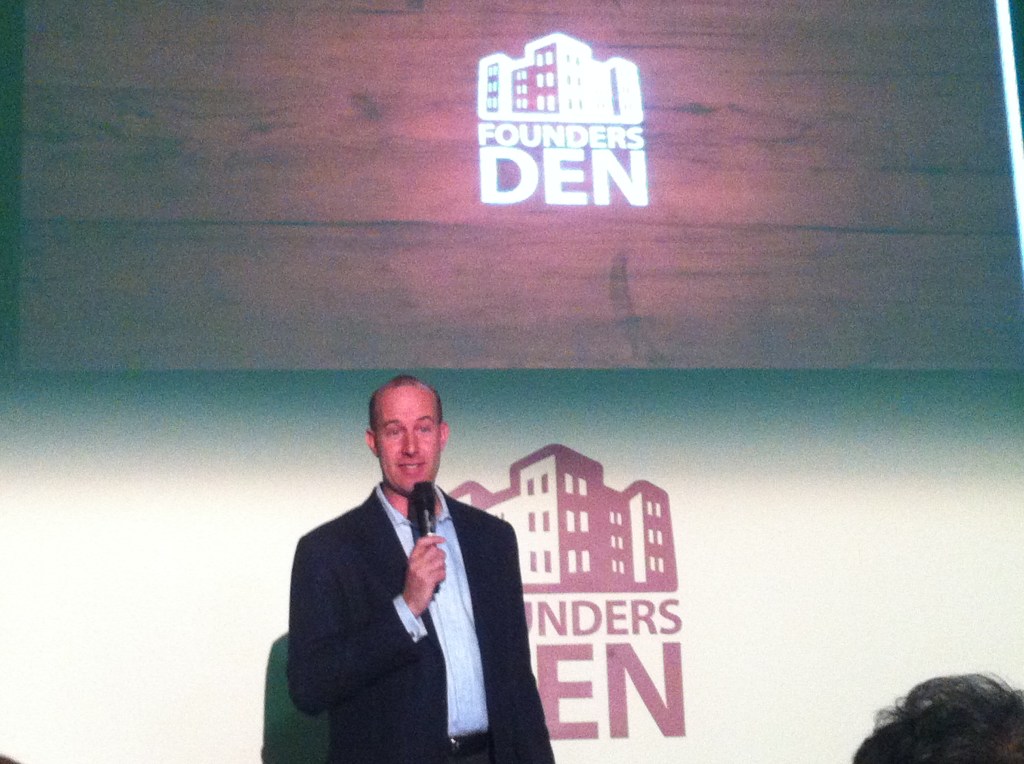 ‘Clubhouse for entrepreneurs’ Founders Den held its Spring demo event today where seven startups presented their products to a room filled with the elite investors.

Founders Den is a ‘selectively curated startup community’ that focuses on experienced entrepreneurs and graduates of accelerator programs. The startup scene in the Bay Area is saturated with entrepreneurs, and Founders Den’s invite-only, referral-based approach seeks to surface the most promising founders, house them in a SoMa coworking space, and allow them to share ideas, network, and be part of the inner circle of Silicon Valley.

Here are the companies presenting today:

Survata runs online surveys for leading brands, agencies, and universities. Founder Chris Kelly said the company takes a more comprehensive approach to online surveys than competitors by offering services for all three parts of the process-  creating the survey, finding respondents, and analyzing respondents. “Companies need to be more scientific than friends and family but more cost effective than a traditional panel study,” he said on stage. Survata sources respondents through its publisher network that reaches 2 million consumers. Clients include high-profile companies like Disney, Microsoft, Harvard, and McKinsey. Founders Kelly and Aaron Wegner have been friends for twenty years. Survata is also backed by Y Combinator.

Rollbar helps developers track and fix errors in production.  Founder Brian Rue said as development migrates from “boxed to cloud” there is no good solution for debugging. Rollbar’s error tracking technology notifies developers immediately when something goes wrong. The product works as a small library you install in the code. The library talks to the API, aggregates data, sends alerts, displays it on a dashboard and sends developers analysis tools to identify and solve problems. “The objective is to bring time to fix an issue from days to minutes,” Rue said on stage. Over 200 companies are currently using Rollbar, including hot startups like Instacart, MessageMe, Everest, MapMyFitness, and CrowdFlower. The technology is already processing 1 million events per day

VidIQ helps enterprise brands get more views and subscribers on YouTube. It operates at the intersection of video, social, enterprise technology, and offers optimization tools as well as analytics. Founder Rob Sandie said that YouTube is the world’s second largest search engine and so far, VidIQ has already optimized more than 15 billion views. VidIQ has raised a $810K seed round from Mark Cuban, David Cohen and others.

Clothia is a fashion site and iPad app that allows consumers to create looks they find online and share them with the community. Founder Elena Silenok was a computer science major who realized upon moving to New York City that her usual ensemble of hoodies and sandals wouldn’t fly. She created Clothia where users can mix-and-match items to create outfits, virtual closets, and share them with friends. Silenok said the way to turn social media into actual brand sales is through iPads.

Archy is a Barcelona-based company that seeks to revolutionize the way users interact with Google Drive. Archy centralizes all user data into one place and provides a set of functionalities to simplify collaboration. You can share with anyone using drag-and-drop, and people can put comments inside of comments and folders rather than adding to an endless chain of emails. Founder Christian Almenar said 72% of companies use more than 2 cloud services, and so Archy’s target market are businesses. As a result, the company makes security.

Movl provides creation tools for multiscreen content on smart tvs. Developers can use Movl to deploy and sync content across multiple platforms. Consumers and networks like Movl for its bringing together of television, tablet, and smartphones. Movl has eaised $2 million from Mark Cuban, Bert Ellis, and others.

Namo Media provides native mobile advertising. Founder Gabor Cselle formerly founded DrawChat and experienced the challenges and annoyance of mobile monetization. He went on to start Namo Media, which places ads in the stream of an application’s content to provide a more seamless and pleasant user experience, and a higher value proposition for advertisers. Namo Media has raised $1.9 million seed round from Google Ventures, Andresseen Horowitz, Betaworks, and Trinity Ventures, as well as angel investors.

Founders Den has fostered 85 companies to date. Of those, 43 have collectively raised $140 million. 12 raised between $0 and $500K, 5 raised $500K- $1 million, 12  raised $1- 2 million, and 13 have raised more than $2 million. DataSift recently raised $15 million, and five Founders Den companies have achieved successful exits, including SocialCam and Kaggle. Three have folded, but you can’t win them all.