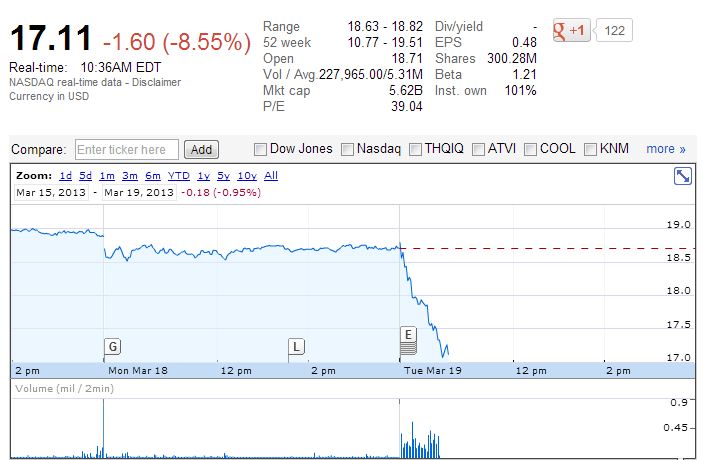 Electronic Arts chief executive officer John Riccitiello announced yesterday that he will exit the company on March 30. The stock market is reacting this morning by dropping the value of the publisher’s shares (NASDAQ: EA) to as low as $17.02, which is down 9 percent from $18.71 at the opening bell.

“We believe the timing makes sense for a CEO transition at the end of the fiscal year and ahead of next generation console launches and a strong second-half title lineup,” Baird analyst Colin Sebastian wrote in a note to investors. “Despite the company’s challenges over the past six years, we believe EA is well positioned for the console refresh cycle, and the company has made progress in building a digital platform and more recently controlling expenses. However, we note that inconsistent financial performance, some high-profile title flops, and employee turnover were issues that impacted the CEO’s credibility.”

When Riccitiello took the CEO post in 2007, EA surpassed $61 per share. In his six years, the company shed nearly two-thirds of that worth. The flops that Sebastian mentions includes Star Wars: The Old Republic, which is the publisher’s expensive-to-produce massively multiplayer online game from developer BioWare. EA had to shift that game from a subscription model to free-to-play due to falling player numbers.

“Former CEO and current board member Larry Probst will assume day-to-day leadership responsibilities for the time being,” said Sebastian. “We believe that leading internal candidates will include chief operating officer Peter Moore and president of EA Labels, Frank Gibeau.”