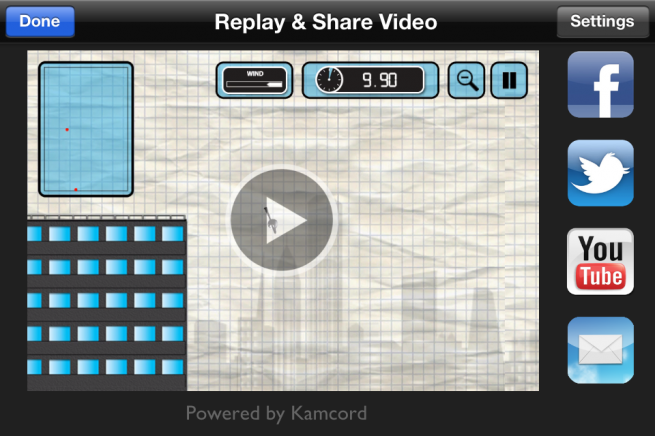 Recording and sharing gameplay videos is clearly a gigantic market. Sony, with the introduction of its PlayStation 4, recently debuted a native game-recording functionality for its next-gen console. Twitch and other gameplay-video services continue to grow on the PC and console, but when it comes to mobile-game video, Kamcord is king.

Kamcord, a company that provides a simple solution for game developers to add video recording and sharing to their games, is announcing some major growth since it got its start in 2012. In February, gamers recorded more than 200 million videos, which is up 10 times from December. The company is up to 5 million monthly active users. Those are impressive numbers, and both should skyrocket now that Zynga is about to implement Kamcord into its Scramble with Friends multiplayer word-find game.

“Zynga has already deployed Kamcord to a limited number of Scramble with Friend users,” Kamcord co-founder Aditya Rathnam told GamesBeat. “I’ve been playing this game a lot, and on Facebook I would always see friends post screenshots showing that they scored 2,000 points. Kamcord is just taking that to the next level because you can see all the words they played to get the score and what power-ups they use.”

When Kamcord launched, players could only share their videos to social networks, but the developer improved its interface so that it can display videos directly in the game app. This is key to something like Scramble with Friends, so that competitors can check and see how their friends scored twice as many points immediately after the round is over.

“We’re really excited to be testing Kamcord,” Zynga product lead Andrew Huang said. “Video is a great way to drive retention and discovery of our games.”

Zynga is evaluating this functionality for a potential release to a wider audience.