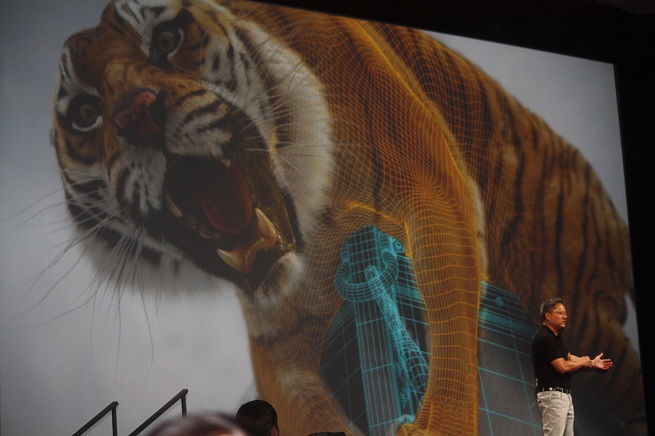 Otoy wants to democratize the development of extremely complex 3D graphics animations by moving the whole process to the cloud. Judging from demos that the company showed today at Nvidia’s technology conference, Otoy is making good progress. 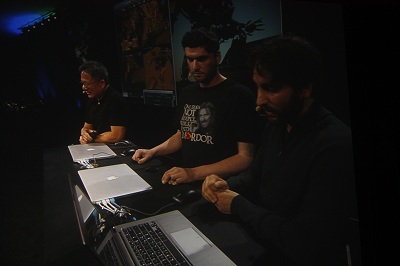 Josh Trank (pictured right, in the middle), director of Fantastic Four, appeared on stage during the keynote speech of Nvidia chief executive Jen-Hsun Huang at the GPU Technology conference in San José, Calif. Trank touted how his special effects team will be able to tap cloud-rendering technology from Otoy to create the movie at a much lower cost.

Otoy uses software such as its Octane Render to allow people to create complex 3D scenes by tapping the computing power of the cloud. The graphic artist doesn’t need a workstation with high-end hardware. Instead, he can use as many cloud graphics processors as needed for a short time and pay for that usage.

It’s like Otoy gives people the ability to create a digital movie or a video game in the cloud and then rent the computing time needed to bring the creation to life.

“It’s elastic, and you render what you need,” said Jules Urbach, chief executive of Los Angeles-based Otoy, in a subsequent talk after the keynote speech. The tools can be used by big-budget movie makers such as Trank or indie game companies that can’t build their own server farms to render their 3D animations. 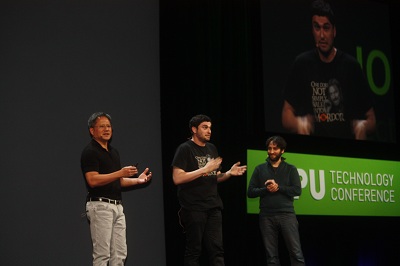 Otoy’s technology and tools — Octane Render for films and Brigade for games — allow a creator to craft a 3D image in the cloud, visualize it, and then push it out to production. It can be used to create high-end images, such as human faces with realistic skin and wrinkles. And artists don’t have to wait days for the work to be done. Otoy will provide the technology to do tasks, such as raytracing, in real-time.

“You will see major game developers building with it,” Urbach said. “Directors can tell their stories more interactively, more quickly. As a result, we should get better movies. It’s now available as a service, so anyone with the chops can tell a story in 3D.”

To use Otoy, animators download a small app from Otoy that allows them to work on project from any computer or — perhaps in the future — any mobile device. They’ll no longer have to go to an office.

Otoy works with off-the-shelf technology. Nvidia will provide the hardware and grid computing software for the data centers that will render the imagery. Nvidia launched on Tuesday its Grid Visual Computing Appliance, a specialized server for cloud-based applications such as Otoy’s. Trank said that the tools enable easier film creation, and Urbach said that the graphics solutions from Nvidia can render images 40 times to 100 times faster than on a central processing unit.

Huang noted that computer graphics is now standard in Hollywood. The tiger in the Oscar-winning Life of Pi is in the movie for 80 percent of the movie, but it was rarely filmed. The tiger (pictured top) was mostly made with computer animations by a group called Rhythm and Hues. The tiger has 10 million hairs, all rendered, and it took several hundred million hours of CPU time to create.

Otoy launched Octane Render in November and has now begun to publicize the service more widely. Tens of thousands of artists are now using Octane. The price is $199. Otoy has made an alliance with Autodesk on the product, and its tools can be integrated as a plugin for almost all the major 3D art tools on the market today.