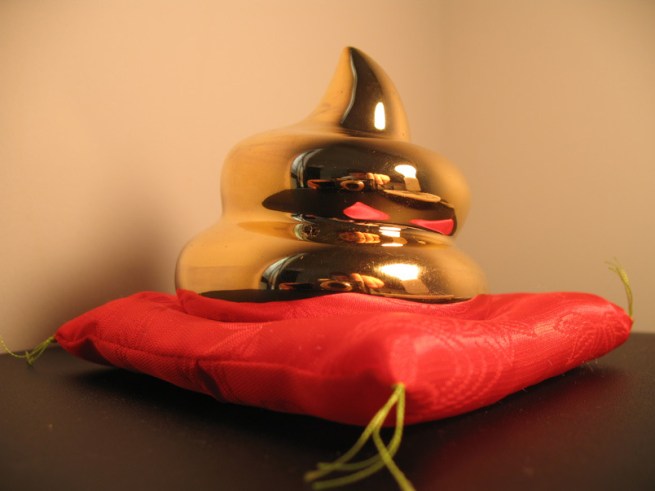 Last year, consumers voted publisher Electronic Arts the worst company in America. The game publisher is one of the favorites to win the tournament this year, but no Golden Poo winner (that’s the actual trophy) has ever repeated in The Consumerist’s big tournament.

Each year, The Consumerist — a blog run by Consumer Reports — holds its pro-customer take on the March Madness NCAA basketball competition. It creates a giant bracket that pits businesses against one another and then asks the public to vote on which one is worse.

EA won the previous tournament on the strength (weakness?) of its tendency to purchase smaller competitors only to shut them down or stamp out what makes them special. Many gamers also complained about the publisher’s habit of hitting customers with fees, like Project Ten Dollar, which charges customers who buy used games to access core functionality, like multiplayer. Yesterday, EA chief executive officer John Riccitiello announced he will step down on March 30. The Golden Poo probably didn’t influence Riccitiello’s decision. (See our long profile of Riccitiello).

For this tournament, the publisher will face stiff competition from Walmart, Bank of America, and Carnival. The cruise line is coming off a public-relations nightmare in the form of the “Poop Cruise,” which had its passengers defecating into buckets after the ship they were on began to break down mid-journey.

Despite that competition, it’s hard to see EA losing this one. A vocal group of customers oppose nearly every decision the company makes, and now they have a single product to rally around in SimCity.

We’ve documented the city-management game’s many difficulties since its March 5 launch. SimCity represents just about everything that consumers dislike about major game publishers.

SimCity requires a constant connection to the Internet. That means people who buy it can’t play it when they are on the train or if their connection is down. This functionality also overloaded EA’s servers, and players couldn’t access the city-builder for the first several days.

EA also wants SimCity online so that it’s easier to sell downloadable content to consumers. It already has a variety of different building types for sale through EA’s digital-download service Origin.

Finally, the perception among fans is that EA forced developer Maxis to design SimCity as an always-online game to fight against piracy and maximize in-game purchases. Maxis denies that claim, but the perception remains.

All of these issues build on what put EA over the top in the Worst Company in America tournament last year.

Of course, it’s not all bad. Even after winning the Golden Poo in 2012, the publisher went on to earn the highest average review score for any game publisher last year. Also, this is a poll on the Internet and doesn’t reflect the full reality of consumer sentiment.