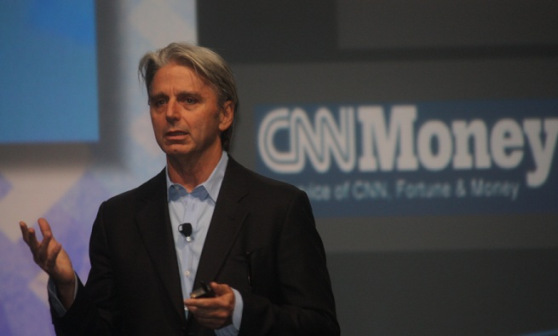 In the nearly six years he led EA, the gigantic video game publisher faced a massive shift in the market, from games primarily sold on physical media and played on consoles to games sold and delivered wirelessly and played on everything from consoles to smartphones and tablets. The market shifted from expensive games you buy and own to free-to-play games that cost nothing to play at first, but which charge you for extras. The market expanded from the living room to mobile devices. Through it all, EA survived — which is more than some of its rivals can say — but it hasn’t exactly thrived.

In this story, we’ll try to recapture the ups and downs of Riccitiello’s tenure at the top of one of the video game industry’s most visible companies, and by the end of it, we’ll sort through the complex picture of his record at EA. We’ll also take a look at where the company is going in the future.

Lessons from success — and failure

Ostensibly, the board fired Riccitiello because he missed his quarterly and annual financial targets. In the past, the board might have excused this, since many companies were in the same boat. But at a time of great change in the video game business, so-so performance is no longer good enough. (EA’s temporary CEO is former chief executive Larry Probst, who is looking for a permanent replacement for Riccitiello.)

Still, it’s too simple to say that Riccitiello was a big screwup. In fact, Riccitiello was in many ways a very successful CEO who guided EA through a very difficult transition. By comparison, rivals such as THQ have crashed on the shoals of the digital gaming revolution while Riccitiello arguably saved EA from such a fate. But to demanding shareholders, merely surviving is not good enough. They want EA to seize the opportunities before it to become the dominant player in digital gaming. And it hasn’t quite done that.

EA declined to make an executive available for an interview for this story. But an EA spokesman said in a statement to GamesBeat, ” In the course of seven years, there’s a lot of puts and takes in that equation – recession, extended console cycle, etc. Beyond the macros, we knew this would be a difficult transition – one that required a great deal of investment in people and infrastructure. We knew that the ROI wasn’t going to be immediate. That said, it’s been more difficult than expected – the turnaround took longer than expected.”

Meanwhile, EA’s chief operating officer, Peter Moore, said on his Facebook page, “[Game news site] Kotaku reveling in what, due to their self-smugness, they don’t realize is a sad day for our industry, which is the platform on which they actually make money. John not only helped propel our company and interactive entertainment into new experiences, thus enticing millions of new people to become ‘gamers,’ his work leading the [Entertainment Software Association] in recent years has helped ensure that we don’t experience the fate of the music industry. Sad loss for all of us who had the pleasure of working with him as we emerged from The Burning Platform.”

Many rivals have beaten EA in small pieces of the larger industry war. If you can fault the company for anything, it may be for trying to fight too many battles at once.

The publisher didn’t lose all of those battles. In his parting message to his employees, Riccitiello pointed to their successes.

“Personally, I think we’ve never been in a better position as a company,” Riccitiello said. “You have made enormous progress in improving product quality. You are now generating more revenue on fewer titles by making EA’s games better and bigger. You’ve navigated a rapidly transforming industry to create a digital business that is now approximately $1.5 billion and growing fast.” 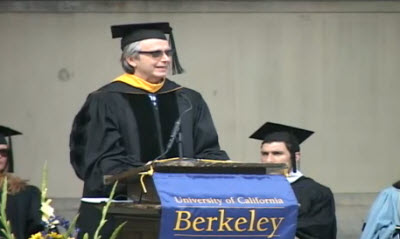 Above: John Riccitiello’s commencement speech in 2011. (Courtesy of UC Berkeley)

Riccitiello set many things in motion. But giving him credit or assigning blame is a complicated matter, as the execution always lies in the hands of thousands of employees.

It is easy to point to EA’s failures, such as Star Wars: The Old Republic, a massively multiplayer online role-playing game that took so long to finish that the market changed from underneath it, moving from lucrative subscriptions to free-to-play. After six years and perhaps $200 million in development costs, The Old Republic didn’t get the audience that EA had hoped for, and it had to shift to free-to-play to hang on to its players.

The reboot of the first-person military shooter Medal of Honor was a sad failure. More recently, big franchises like Crysis 3 and Dead Space 3 didn’t perform as expected. And the recent SimCity launch — which sold more units faster than any other title in the city-simulation game’s 24-year history — was marred by EA’s failure to provide enough servers for the always-connected game.

On the positive side, EA’s Battlefield military shooter series became a big hit, and FIFA Soccer has become a monstrous franchise, with a large component of digital revenues.

EA’s shares are down 60 percent since Riccitiello began. Shareholders and boards often show no mercy when they fire a CEO, and in this case, they had plenty of failures to point to as reasons to fire Riccitiello, who once told VentureBeat, “I don’t think investors give a shit about our quality.”

“Transitions are painful,” said P.J. McNealy, a longtime game industry follower and analyst at Digital World Research. “Look at Sony and the changes they had in leadership. EA has struggled. THQ has struggled. At some point, there has to be accountability for it. Typically, it’s not any one reason. But EA’s struggles are not limited to just this quarter.”

But it’s easy at a time like this to forget about Riccitiello’s successes and how each failure was also rich with learning.

“I’ve had first-hand experience with failure, and I have had the opportunity to learn and recover from it,” Riccitiello said in a speech at his alma mater, the Haas School of Business at the University of California at Berkeley, in 2011.

He’ll have plenty of time to ponder the lessons he learned at EA now.

In its own statement defending Riccitiello’s record, EA said to GamesBeat, “Our definition of turnaround swung on how quickly we could transition from the packaged goods model to digital goods and services. John made it clear that this was life or death. The dissolution of THQ this year makes it clear how right he was. By every measure, the turnaround is happening. As noted in an earnings call, this is the last year that digital revenue will be under 50 percent of EA’s total. One example is the first two weeks of [digital] sales for SimCity were just under 45 percent, and we expect the percentage will go even higher. Riccitiello’s turnaround is an article of faith inside EA – if it hadn’t happened, we wouldn’t be in business today.”

Riccitiello joined EA as chief executive in 2007. It was his second stint at the company. He had previously served as president and chief operating officer from 1997 through April 2004. He left in between to become a co-founder of Elevation Partners, a private equity investment firm that hatched the merger of game developers BioWare and Pandemic. 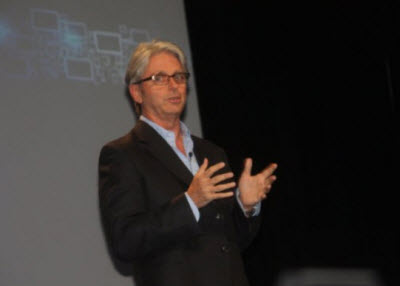 In his first tenure, Riccitiello was new to games. He had spent a career in consumer products at companies such as Clorox, Pepsi, Haagen-Dazs, Wilson Sporting Goods, and Sara Lee. Probst hired Riccitiello on the bet that his experience in consumer marketing would pay off at a time when video games were becoming a worldwide mass market. With properties like Madden NFL and FIFA Soccer, EA had become a household name. Its biggest rival today, Activision Blizzard, hadn’t yet been formed.

During Probst’s 16-year tenure as CEO, the company became the undisputed giant of the video game business. EA was the king maker, breaking Sega’s Dreamcast console when it chose not to create games for that platform and making the PlayStation 2 by throwing all of its weight behind Sony’s system. By the time Riccitiello joined, EA was in its glory years, and it was looking at how to further exploit its position as a giant in sports games, licensed movie titles, and online games.

He was a newcomer to games, but Riccitiello immersed himself in them as a player and as a cultivator of talent. Probst, the former chief executive and now the acting CEO again, and Activision Blizzard CEO Bobby Kotick have both admitted to not being gamers, or at least not the really hardcore kind. But Riccitiello played games and tried to understand the way they were built. He was sharp and a quick study and formed relationships with key creators.

Riccitiello made contributions, but always as part of a larger executive team. He and studio chief Don Mattrick encouraged the company to get behind Will Wright, who was working on a dollhouse-like title that would later become The Sims, the best-selling EA game series of all time. Riccitiello encouraged his leaders to take risks, egging Neil Young to create a visionary title in Majestic, an early alternate-reality game that turned into a commercial flop. In one case, Riccitiello made a brilliant bet. In the other, the outcome was a dud. These results would be typical of Riccitiello’s life at EA. He could share a vision with marquee developers and get behind them like a zealot. Sometimes it panned out; sometimes it didn’t. But he was always willing to bet big.

Riccitiello’s job was to diversify EA, and he did so through acquisitions of companies like Pogo.com, a casual game website for older, less serious players. EA picked up Westwood Studios, the creator of the Command & Conquer real-time strategy series; and Dreamworks Interactive, the original developer of Medal of Honor. It also bulked up with acquisitions of racing game studios and rode the success of titles based on the Harry Potter books and films. EA stole the James Bond 007 movie-game license from Nintendo, convincing the Hollywood owner that it could take the series multiplatform. Riccitiello and executive Frank Gibeau played a role in that coup. EA came to specialize in multiplatform blockbusters.

The company had become so dominant during the era of the PlayStation 2 that developers feared it would homogenize the industry and drive out all of its creativity. That led some to do everything they could to stay out of EA’s clutches, an issue that persists today. EA’s acquisitions follow a pattern. Some thrive for a while, but as soon as their magic wares off, EA shuts them down and puts its efforts behind another.

And during the run-up of the huge dotcom boom, Riccitiello searched for a way for EA to cash in. After Richard Garriott’s Ultima Online became the first major hit in massively multiplayer online games, Riccitiello started EA.com, a web games business that would be home to a whole collection of MMOs. With these games, EA could keep much more of the profit since it charged subscription fees. Under Riccitiello, EA initiated big-budget online titles like Motor City Online, Earth & Beyond, The Sims Online, and Ultima Online 2.

But the dotcom bubble burst and brought down everything with it. That was a costly lesson. EA wrote off more than $400 million. Of all of the things that Riccitiello had achieved at EA, the failure of EA.com would, fairly or not, become a huge part of his legacy. You could argue that he had been caught up in the Internet wave and that he deserved to be fired for making the wrong bet. But then, you could also fire just about everybody in Silicon Valley, where EA is based, for the same thing.

During Riccitiello’s stay as the No. 2 executive at EA, the company got bigger and stronger. It had setbacks, but that’s entertainment.