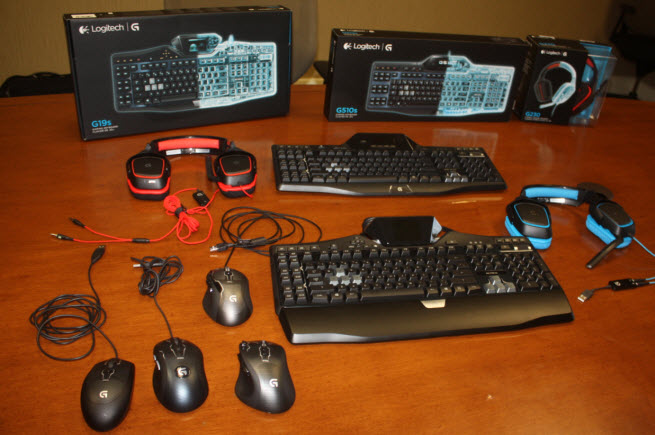 The publicly traded Swiss company recently announced it would de-emphasize console gaming peripherals. But there’s a resurgence happening in PC games as trends such as free-to-play, battle arena titles, and eSports breathe new life into the category.

The new designs reflect a “our passion for science,” said Ehtisham Rabbani, general manager of the Logitech gaming business group.

“We made mice for gaming for 20 years, but this is the first time we are breaking them out as a gaming brand,” said Mark Starrett, global product marketing manager, in an interview with GamesBeat.

The packaging on the boxes has an X-ray effect because Logitech wants to show that the inside is what counts on these products, as well as the cool industrial designs on the outside. The products are focused on speed, precision, and reliability.

In doing its research, Logitech used infrared technology to study the interaction between hand and device during gameplay. It used that data to improve durability and comfort. The engineers used advanced surface materials to the strategic “tactile zones” of the devices.

For zones with heavy contact, Logitech added fingerprint-resistant coatings. Palm area feature a hydrophobic coating, which keeps your hands from sticking. Some of the mice also have a soft or dry grip for increased comfort and control.

The two new G keyboards feature a double ultraviolet coating on the keys for extra durability and long life. They also have fingerprint-resistant coating on the faceplate.

Among the mice, the Logitech G100s Optical Gaming Mouse and G400s Optical Gaming Mouse have exclusive Delta Zero sensor technology. The sensor is optimized for high-accuracy cursor control. And all of the new Logitech G mice have low-friction polytetrafluoroethylene feet, which reduces drag for faster motions, smoother cursor movements and accuracy. All of the devices except the Logitech G430 are Mac-compatible.

The lineup includes the following devices: 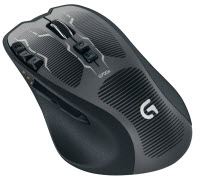 The Logitech G700s rechargeable gaming mouse (pictured right). This is a wireless device that comes with a micro universal serial bus (USB) cable which can charge the device while it is plugged in. The device is up to eight times faster than a standard USB wired mouse. It has a hydrophobic coating on the palm area and a dry grip on the sides. It has 13 programmable controls and you can use them to create complex macros with multiple keystrokes. It will sell for $100. 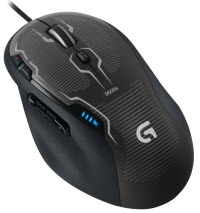 The Logitech G500s laser gaming mouse (pictured left). For first-person shooter games, the mouse uses a gaming-grade laser for precise cursor control. It has a hyper-fast, dual-mode scroll wheel. It has the hydrophobic coating and dry grip. It has up to 27 grams of customizable weight and center of gravity adjustment. So you can tune the mouse to your style. You can switch from pixel-precise targeting at 200 dots per inch or the super-fast 8,200 DPI. It has 10 programmable controls and will sell for $70.

The Logitech G400s optical gaming mouse. This mouse is built for first-person shooters and has the Delta Zero sensor technology for high-accuracy control. It has a hydrophobic coating and soft-touch grip areas, fingerprint-resistant coatings on the primary buttons, and eight programmable buttons. It can operate at 400 DPI to 4,000 DPI. The mouse will sell for $60.

The Logitech G100s optical gaming mouse. This device is made for real-time strategy and battle arena games. It is a successor to the Logitech G1 mouse and the Logitech Gaming Mouse G100. It has buttons for heavy clicking and the Delta Zero sensor technology. It has mechanical switches rated for a lifespan of 20 million clicks. It has the hydrophobic coating and fingerprint resistance. The mouse will sell for $40.

The Logitech G19s gaming keyboard. It features an integrated liquid crystal display GamePanel. The keyboard has custom color backlighting. You can choose from 16 million shades and assign a specific color for every profile and mode in a game. It has a hydrophobic coating on the palm rest and double UV coating for the keys to give them longer life. It has 12 programmable G keys with up to 36 different functions across three different modes. It has two high-speed USB 2.0 ports so you can plug in MP3 players or flash drives. And you can use the ports to charge devices. More than 65 games already support the display. It will sell for $200. 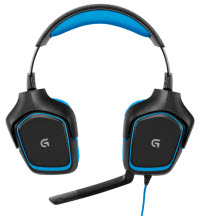 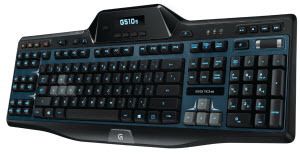 The Logitech G510s gaming keyboard. This one has 18 programmable G keys, which allow you to configure up to 54 different functions across three different modes.It has a backlit GamePanel LCD, custom-color backlighting with 16 million colors. It has a hydrophobic coating on the palm rest and a double UV coating on the keys. It will sell for $120.

The Logitech G430 surround sound gaming headset (pictured left). This headset is similar to the Logitech G35 Surround Sound Headset and the Logitech Wireless Gaming Headset G930. It is powered by Dolby 7.1 surround sound headphone technology to give you a 360-degree sound feeling. It has washable ear cups so you can wear the headphones for a marathon session. It has a noise-canceling microphone that folds up and out of the way. It will sell for $80. 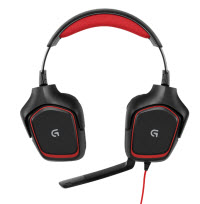 The Logitech G230 stereo gaming headset (pictured right). It uses 40 millimeter neodymium drivers to keep you immersed. It has a washable performance-sport cloth that covers your ears. It has a flexible noise-canceling microphone and in-line audio controls. It will sell for $60.

All of the products will be available in the U.S. in April and in Europe in May. To publicize the new G brand name, Logitech is likely to sponsor eSports teams. Last year, it sponsored the League of Legends eSports championships. Rivals include Razer, Mad Catz, and Turtle Beach.