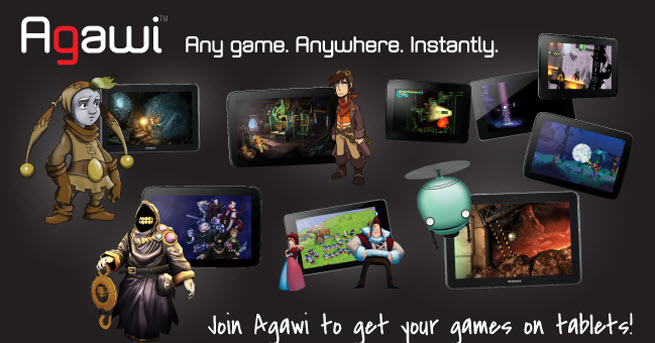 Cross-platform is in these days in the game business. In recognition of this, Agawi is announcing today a platform that allows top indie PC game developers to publish their products via streaming technology on Android mobile devices.

The Menlo Park, Calif.-based Agawi will enable PC game makers to reach the growing gamer audience on Android tablets. And the work requires no effort on the part of developers in terms of porting to Agawi’s CloudPlay platform. So far, numerous developers will use Agawi to publish 15 games on the platform.

Relan said that Agawi has created a business-to-business-to-consumer (B2B2C) platform, where developers come to it and get Agawi to publish the games so consumers can directly play them. Agawi will make the games available as three-day or five-day rentals. It uses cloud technology, converting the games in a data center so it can stream them as video to a player’s tablet. The interactivity is sent back up to the web-connected data center where the game runs. Since the game runs on a server, it doesn’t matter what kind of hardware the player is using.

Developers would normally have to write a lot of new code to port a game to a new platform. Relan said this means that taking games to tablets via Agawi is an ideal way to expand a business without making sacrifices. Naerly half of developers say they are still choosing to code specifically for the PC.

Partners include Daedalic Entertainment (Chaos on Deponia); Teotl Studios, the maker of Unmechanical; Or1go Games, developer of A.R.E.S.: Extinction Agenda; Neko Entertainment, which brings its title Puddle; Plug In Digital with WRC 3; and Crankshaft Games with Party of Sin.

Other games and publishers will be disclosed later.

Tablets are hot, with more than 240 million units forecast to ship this year. Agawi is already available on the iPad, where players can enjoy titles such as Zynga’s Flash-based Facebook games on Apple’s tablet. Now it can generate incremental revenue for PC game developers on Android. Agawi will show off the technology next week at the Game Developers Conference in San Francisco.

“As Daedalic continues to introduce its critically acclaimed games series across new platforms and offer them through new distribution channels, we’re very happy to partner with Agawi, whose cloud gaming platform allows us to deliver our award-winning Deponia title to the millions of users of tablets,” said Sergei Klimov, director of international business development at Daedalic Entertainment. “The availability of different rental models and the fact that we can set the prices on our own makes this partnership very interesting for independent studios like us, and we look forward to bringing more titles to this platform in the near future.”

Agawi’s partners for its service include Nvidia and Marvell. Agawi is an acronym for “Any Game, Any Where, Instantly.”

“As an indie developer, it’s really important for us to be thinking about where our games are going to reach a maximum audience,” said MiniBoss founder Pedro Medeiros. “Agawi is helping us reach players across platforms and devices. We’re proud to be a part of their platform launch and to see our title, Out There Somewhere, reach hundreds of millions of tablet users without any investment on our part.”

Agawi has already brought thousands of social web games to tablets via its cloud platform for the iPad and Windows 8. Agawi makes money through flexible profit-sharing programs.