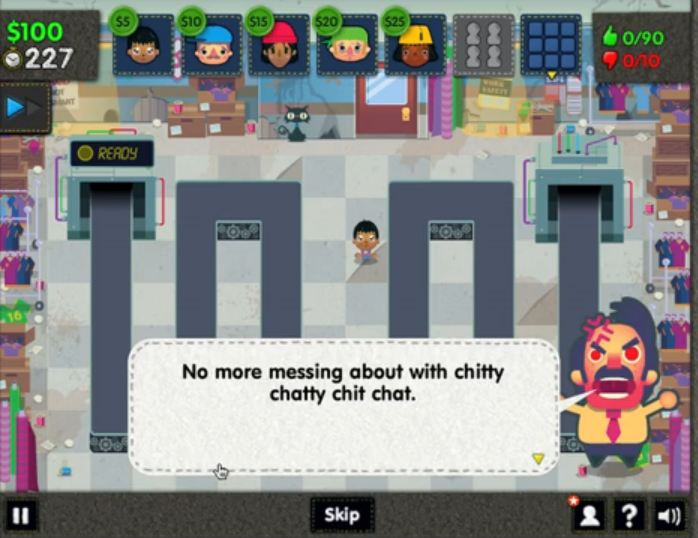 We already know Apple’s stance on games that explore controversial subjects. The company explicitly states that people who want to tackle touchy subjects should write a book and not make a game. In January, Apple blocked Endgame: Syria — which explores the Syrian civil war — from the App Store.

Apple is at it again. The company recently removed an iPad game called Sweatshop HD from its app platform, according to Pocket Gamer. Developer Little Loud produced the game to challenge young people to think about where their designer clothes come from.

Apple says it is “uncomfortable selling a game based around the theme of running a sweatshop.”

Similarly, I’m uncomfortable when people start talking about “that weird smell” after I skip my morning shower.

Littleloud’s Sweatshop HD is a strategy game where players control a middle manager in a clothing factory. The only way to rake in the maximum cash is to mistreat your employees.

Throughout last year, Apple made headlines for hiring suppliers like Foxconn, which employ questionable labor practices. Apple isn’t alone in using Foxconn, but it is the one blocking a game about sweatshops.

“Apple specifically cited references in the game to clothing factory managers ‘blocking fire escapes,’ ‘increasing work hours for labor,’ and issues around the child labor as reasons why the game was unsuitable for sale,” Littleloud head of games Simon Parkin told Pocket Gamer.

The developer attempted to get the game back on the App Store by clarifying that it is a work of fiction and that it doesn’t force players to exploit the workers.

“Rather, Sweatshop is a sympathetic examination of the pressures that all participants in the sweatshop system endure,” said Parkin. “Sadly, these clarifications and changes weren’t enough to see the game reinstated for sale.”