Developer InXile already has a deep roster of fantasy writers working on its successfully funded followup to Planescape: Torment, but they’re about to add another one that scares the hell out of creative lead Colin McComb.

Fantasy author Patrick Rothfuss, who wrote the acclaimed 2009 novel The Name of the Wind, will write for Torment: Tides of Numenera if the Kickstarter reaches $3.25 million. GamesBeat asked McComb yesterday what it’s like leading a team of writers that includes massive names like Rothfuss.

“That part is a little scary,” McComb told GamesBeat. “I’m a little wary about telling these people what to do. I’m really excited to work with them, but at the same time I think, ‘wow, where do I get off telling you how to do this?'”

Other writers include the designer of the Numenera setting Monte Cook and Neverwinter Nights 2: Mask of the Betrayer designer George Ziets. 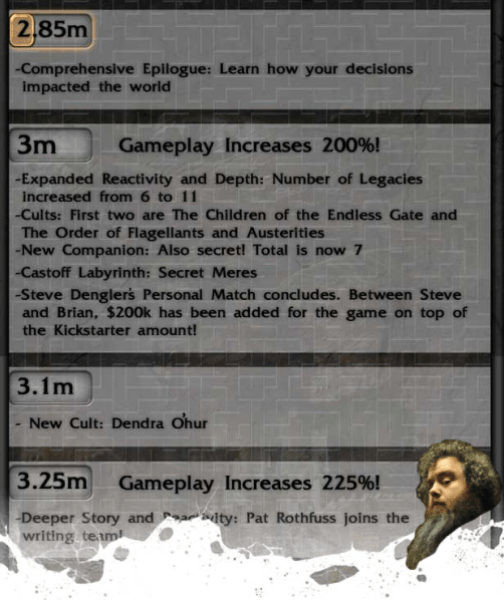 Cook set the world a billion years in the future after eight different advanced civilizations popped up and then collapsed. The remnants of their technology is indistinguishable from magic to the people left in the realm.

“In the setting that Monte provided for us, the way the humans live is like the peasants in medieval times,” said McComb. “They sit around campfires. They play lutes to each other. And then they stumble across these enormous, strange things. There’re monsters all over the place, twisted dimensional travelers — the people in the world don’t understand it. The best they can do is hope to master it and turn it to their own good.”

That the characters in the world of Torment don’t understand the world gives a lot of freedom to the writers, who don’t have to necessarily explain their every sci-fi/fantasy whim.

Of course, Torment is still in the crowdfunding stage. The project has 15 days left on Kickstarter, but 51,000 backers already contributed nearly $2.8 million. That’s well beyond its original $900,000 goal.

For McComb, who spends most of his days handling Kickstarter-related duties, he can’t wait to get started on the actual production.

“Right now, we’re just telling people what we want to do,” said McComb. “Once we get started, we actually get to do it. And I’m beyond excited to do that.”