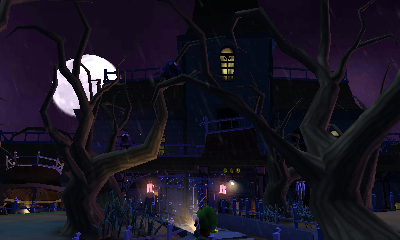 Luigi has the worst luck imaginable. Twelve years after he escaped from a ghost-filled mansion, he finds himself stuck in a fog-covered valley full of haunted houses! To make things worse, all the spirits in the area are way more aggressive than they’ve ever been, and only Luigi can locate the five shattered pieces of the magical Dark Moon that keeps them at bay. Well, the odd Professor E. Gadd insists Luigi is the only one who can help, anyway.

Luigi’s Mansion: Dark Moon is the first Luigi-centric game since the original came out on the GameCube in 2001. It carries on some of the best aspects of its predecessor while dedicating itself to more puzzle-driven level design and far fewer references to the Super Mario Bros. Mushroom Kingdom. The writing is just as irreverently clever, and the world so much more personalized for Luigi, that Dark Moon feels more like a fresh take on the franchise and not a sequel to the first game.

While Dark Moon definitely succeeds in setting itself apart from the original Luigi’s Mansion, its gameplay cries out for a dual-analog control scheme that it sadly doesn’t get on the 3DS. The result is a sometimes frustrating ghost-hunting experience made more complicated if you try to play with 3D enabled.

Even though Dark Moon is the second Luigi’s Mansion, it is the first where the protagonist really feels like he’s standing on his own. This time, Luigi isn’t searching for Mario, he isn’t constantly bombarded with poison mushrooms, and he’s practically kidnapped by E. Gadd to fight ghosts. Terrified and mostly alone, he sets out to pacify a entire valley full of haunted houses.

It’s wonderful seeing Luigi fall so easily into a storyline that doesn’t need Mario or Princess Peach to motivate it. In Dark Moon, Luigi is fighting for himself and has to power through his fear of ghosts to succeed. While trying to save himself, he’s also inadvertently saving the world from aggressive spirits, so he still ends up a hero.

Ghosts sure do like to make things complicated for Luigi as he searches for pieces of the shattered Dark Moon. You’ll have to search every rug, painting, and web-covered ball to make your way through the five spooky locations in the game. You learn puzzle mechanics through simple, straightforward scenarios, but solving later puzzles requires you to remember every sneaky solution you’ve ever discovered in order to progress.

Because of that, Dark Moon is a satisfying brainteaser that pushes you to try crazy combinations in the hope that maybe setting a stretchy piece of spiderweb over to an open flame just might clear the path. The game won’t penalize you for trying, so why not run with it? 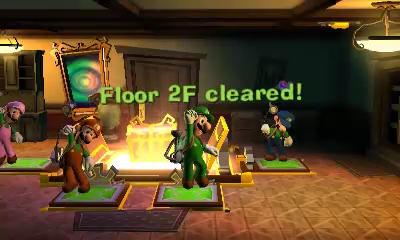 The original Luigi’s Mansion had a lot of great ideas, but it suffered from trying to merge too many elements at once. Dark Moon takes the best concepts from the first game (like vacuum-based ghost trapping and oodles of hidden money) and sprinkles in better weapons and tools. Luigi now has the Poltergust 5000 at his disposal, an even stronger capture unit that can find objects ghosts that are trying to hide and delicately pluck cobwebs off suits of armor.

Luigi no longer has to worry about mushrooms slowing him down. Dark Moon puts more emphasis on skillfully dodging ghosts and timing your attacks than limiting Luigi’s power to fight back.

Dark Moon also supports local and online multiplayer. Now you can play through several ghost-busting challenges in the “Scare Scraper” with your friends, like fighting floor after floor of baddies or running around trying to find hidden ghost dogs. Setting up multiplayer matches is relatively easy, but you’ll need to play through part of the first mansion before you can use it.

Nothing pairs better with a touchy 3D screen like tilt controls, am I right? You don’t have to move your 3DS to aim Luigi’s Poltergust 5000, but you’ll definitely want to after trying to trying to look up and down with the X and B buttons while holding down the right bumper to suck in ghosts. Dark Moon is simply begging for Circle Pad Pro support, something Nintendo did not include. It’s not like that would have helped me anyway; I played this game on a 3DS XL.

You cannot turn off the tilt action, nor can you remap the 3DS buttons to make combat less painful. 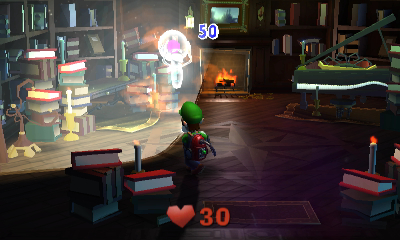 Dark Moon means well by putting more emphasis on player skill than restricting Luigi through status-effect items, but levels sometimes feel too cluttered or too precariously constructed for you to avoid ghost attacks efficiently. Since the game rates your level performance based on how much damage you take as you fight, the tricky combat often leaves you very wounded as you fumble with the Poltergust.

While I like that many of the boss fights in Dark Moon require you to think on your feet and solve puzzles while you’re avoiding obstacles, it is incredibly frustrating to find yourself stuck in a corner or pinned by a fallen piece of flooring thanks to the limited screen real estate on the 3DS. Much of the claustrophobic feeling definitely comes from the fact that level designs are much smaller in scope than the original game thanks to hardware limitations.

It’s still very playable, but you are frustratingly aware that you’re playing a handheld sequel to a console game. I think canning the 3DS idea and moving Dark Moon to Wii U would have addressed practically all my complaints.

Luigi’s Mansion: Dark Moon is a puzzle-rich wonderland full of irreverent humor and clever level design, but it cannot overcome the 3DS’s limitations. Tilt controls and the lack of a second analog stick really tarnishes an otherwise amazing game. I really, truly wanted to love Dark Moon unconditionally as it freshens up the Luigi’s Mansion concept and depicts its protagonist as truly acting on his own for the first time, but playing it is extremely frustrating at times.

Dark Moon is still incredibly fun, but you have to approach it realizing that the controls aren’t what they should be. I’d almost take aiming the Poltergust with the stylus over the awkward way Nintendo implemented aiming here, but that would make the game just as unwieldy as Kid Icarus: Uprising’s use of the touchscreen for movement. Uprising’s biggest problem, though, was that it did support the extra circle pad but only to change which thumb used the 3DS’ built-in analog nub.

What saves Luigi’s Mansion is that it isn’t Kid Icarus: Uprising, but it’s still a bit disappointing.

Luigi’s Mansion is a 3DS exclusive that released on March 24, 2013. Nintendo provided an eShop code for this review.