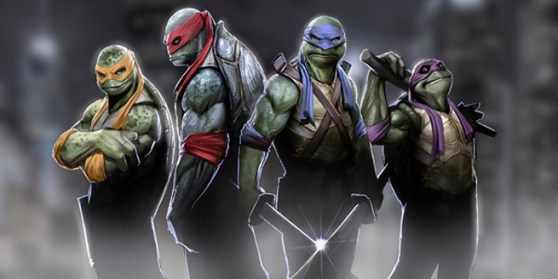 I gave up on the Teenage Mutant Ninja Turtles right around the time they started wearing different-colored masks. Chris Frechette, the lead designer at Red Fly Studio, had the opposite experience.

“I grew up with the cartoon and the movies,” he says. “I had all the toys, dozens of notebooks with drawings I did as a kid. Then I discovered the original comics and was like, ‘Holy crap, this is not the turtles I know,’ and I fell in love with that.”

Appropriately enough, he’s putting both approaches into Teenage Mutant Ninja Turtles: Out of the Shadows (due this summer on PC, Xbox Live, and PlayStation Network), the turtles’ latest jump into smack-em-up video games. Frechette describes it as his dream-come-true project, and during a hands-off preview session, it wasn’t tough to see why.

For starters, the game looks dark and gorgeous. A walk through a rainy New York alley at night threw around plenty of sensuous shadows and water effects while sai-wielding Raphael smoothly walked to a nearby manhole cover. The game borrows from Nickelodeon’s current — and very popular — take on the turtles but lives in its own continuity with its own style. Rather than the angular designs seen on the TV show, Out of the Shadows more closely resembles the realistic features from the 2007 film TMNT, and each turtle comes with their own unique look and play style. 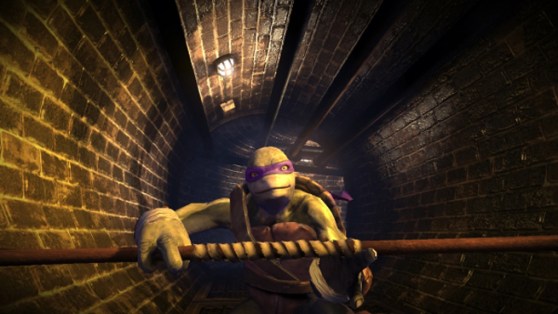 Frechette points to nunchuck-carrying party animal Michaelangelo. “Mike’s the smallest guy in the group [and] does the least amount of damage, but he’s the fastest, so his combos chain, and you can build combos really quickly.” His moves incorporate elements of the Jamaican martial arts capoeira and breakdancing whereas Raphael is the beefier, more muscular Muay Thai bruiser. One favors button-mashers. The other requires technique.

Donatello’s bo staff and kung fu move-set gives him the best reach while sacrificing speed. He’s the tallest and the slowest of the four. Naturally, team leader Leonardo comes off as the best all-around fighter. Frechette doesn’t want to pin down Leo’s style to taekwondo but does admit it’s very kick-centric.

And every turtle gets upwards of 70 moves each, including unlocks, roundhouse special attacks, power knock-outs and counters, and modifiers players activate by hitting triggers on the controller — and that doesn’t count taunts and shell-bumping high-fives. On paper and on screen, it comes off as a step into a DMC: Devil May Cry-type fighting system … minus gunfire and dismemberments. The overall design might reach for the franchise’s more gritty roots, but the action stays firmly in PG-rated territory. Finishers look painful yet remain blood-and-viscera free. Still, during a huge crowd-control battle between the turtles and a dozen ninja from the rival Foot Clan, the combat looks fast, frenetic, and fun.

The best part, however, is that you aren’t locked in to any one turtle. Out of the Shadows features four-player online co-op and two-player local co-op, but all four turtles go on every mission, and you can instantly switch to any open character just by tapping the D-pad. 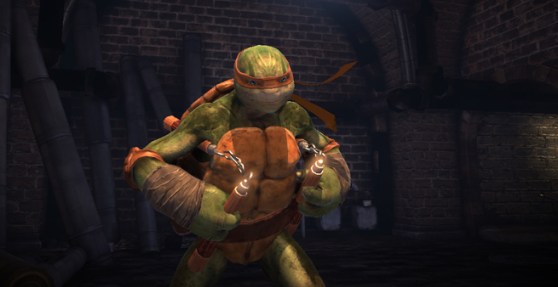 You can even use that swap to pull off two-man combos on your own or keep your own combo alive by switching to avoid taking a hit. Expect your fellow turtles to rag on you if you keep get roughed up and cheer high-combo runs. That also earns experience points toward earning new moves. And once you’re ninja-ed through the 4-5 hour campaign’s seven environments, you can take your buffed-up amphibian and his upgraded weapons into arena challenge modes.

Frechette won’t talk story or plot yet, but the standard rogues gallery of Foot ninja and Purple Dragon baddies — “They’re not as nice as they are in the show,” he says — appear, with hints that TCRI aliens and possibly even the Shredder himself will put in an appearance. Above and beyond that, Frechette’s throwing in the kind of easter eggs only a true, dedicated fan would know about … things from previous games, shows, and the movies. I caught a two-turtle combo attack where they rolled through the screen like a bowling ball, just like they did in the rooftop battle from the first movie.

And while they’re still wearing their well-established color-coded masks, Out of the Shadows does hit on one thing that takes it a step away from the “Cowabunga, dude!” kiddie fare that drove me away so many years ago.

“When you’re in combat, you get the white eyes,” says Frechette. “I’ve never been a fan of the iris-and-pupil look on the turtles. I want white eyes.”