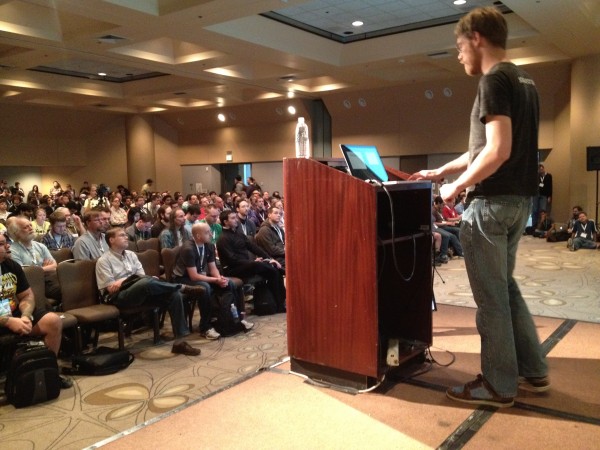 Or, an alternate telling of the Adria Richards story

Interior, developer conference. The crowd is 80 to 90 percent male, but that’s not unusual in 2013. Women are still fighting their way into the technology industry, but since most of the female folks in tech don’t know how to code (yet), their numbers are even sparser in this particular room. As a result, many of the women who are here are rawly self-conscious, some even to the point of being defensive about their very right to be here.

CHARLIE: Think your dongle’s big enough for the job?

ALICE: [Turns around in her seat to face BOB and CHARLIE, who are seated in the row behind her.] Excuse me. I couldn’t help overhearing your conversation, and at the risk of sounding overly sensitive, I did want to tell you that it made me uncomfortable.

ALICE: It’s just — I’m a woman, and men don’t talk like that in front of women in any other professional context. It’s just unwelcoming and kinda offensive, actually.

CHARLIE: Well, right. We weren’t really thinking about it. To be honest, we don’t get a lot of women at these things.

ALICE: Oh, believe me, I know! Just try to be a bit more aware, ok? After all, we all want more women in the room, and we won’t get it if we keep talking like that.

BOB: Absolutely. And hey, we’re really sorry. We didn’t want to offend anyone.

ALICE: It’s cool. Thanks for being understanding.

ALICE turns back around. It took all her nerve to confront those two, and although she’s flustered, she’s proud of herself for taking a stand. She writes a tweet: “Just wrist-slapped a couple devs for locker-room bullcrap @ PyCon. But it ended well! That’s 2 brogrammers down, N to go…”

CHARLIE posts a note in his startup’s Campfire chatroom: “BOB and I were joking about forking and dongles, and this woman turned around and read us the riot act about it… in a nice way, though. I honestly had no idea anyone would find that kind of thing offensive.” A few other team members chime in, and the group has a brief conversation about women in programming and how the environment is changing.

As the session ends, BOB taps ALICE on the shoulder.

BOB: I just wanted to say, thanks for throwing a yellow flag on us. We would never have noticed we were being unwelcoming, and that could have ended so much worse if you hadn’t had the chutzpah to actually say something to our faces.

CHARLIE: Yeah, it actually sparked an internal chat at our company. We’ve been trying to hire a woman developer for ages, and it seems we still have some learning to do on the HR side if that’s ever gonna happen.

ALICE: Wow. Well, I’m really glad I did say something! Thanks. Have a great day, guys.

BOB and CHARLIE: You too!

All the conference attendees exit the hall to get lunch. There is no shitstorm on the Internet, no one gets fired, no one gets DDoSed, and a small group of people decide to change their actions to align with their values.