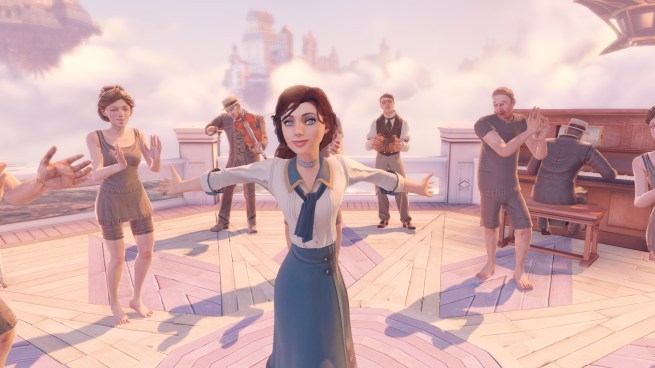 Let’s get this out of the way: I think you should play BioShock Infinite.

The first-person shooter from developer Irrational Games (due out March 26 for Xbox 360, PlayStation 3, and PC) is one of the biggest releases of this console generation. In production for five years, Infinite has to live up to its predecessor’s pedigree and justify that half-decade of hype.

Does it live up to those expectations? Not entirely, but I don’t know what could. What it does do is entertain and enthrall.

Players take the role of Booker DeWitt, the rogue who is in too deep with loan sharks. DeWitt takes a job to rescue a girl from Columbia, a floating American city, to wipe away his debts.

If you played the original BioShock, you’ll recognize much of the structure that holds up Infinite. This is definitely a “BioShock.” The adventure starts as abruptly as the last. Once you’re in Columbia, the world confronts you with extreme social issues. You’ll have access to special powers called Vigors that stand in for the Plasmids from the 2007 release. DeWitt finds audio recordings that flesh out the world. It even has a lighthouse.

Irrational settled on a specific style, and Infinite is a riff on that. And it’s a riveting take on the concept. It plays so well, and the urge to uncover Columbia’s mysteries are so compelling, that I ripped through its dozen hours of gameplay in two sittings.

When it was over, I was satisfied but also a little confused and a touch disappointed, and while that wouldn’t hurt most other games, this one is so meticulously crafted that you can’t ignore even the tiniest cracks.

Elizabeth is the aforementioned girl in need of rescuing. Well, “rescue” isn’t the right term. She really just needs a ride out of Columbia — otherwise, she can take care of herself.

You spend a good portion of Infinite accompanying this young, mysterious girl. Amazingly, not a single minute of that feels like an escort mission. Actually, it sometimes feels like she is escorting you.

Elizabeth never stands in a doorway, she’ll never harass you with banal banter, and she’ll never say something like “Can we get going?” If you want to stop and check every corner for cash and ammo, she’ll follow along and not just as some empty-headed A.I. assistant.

If you’re scavenging for items, she’ll go and lean against the wall — or occasionally, she’ll spot something and point it out to you. If you stop to look at a vending machine, she’ll take a seat at a nearby bench. If you pause to appreciate some art, she may walk up next to you and do the same. She’s a human with her own interests and motivations. 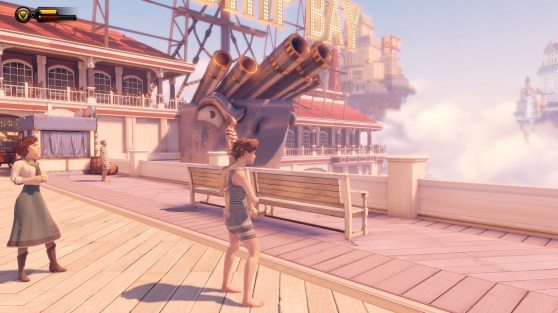 In combat, she serves two purposes. She finds extra ammo, items, and health and tosses it to DeWitt when he needs it most. She can also revive you when you lose all of your health.

Elizabeth also has trans-dimensional shifting powers that she can use to open existing portals to alternative realities. She can manifest powerful weapons, cover, or special platforms into your current reality using this ability. This gives the player another tool to use during combat.

I would consider Elizabeth a success if she simply never annoyed me, but her personality ensured that my relationship with her was about more than mere tolerance. All of Irrational’s tiny touches brought her to life, and I actually grew attached to her. Her routines are so systemically complex, the animation so precise, the voice acting so heartfelt that I will always remember BioShock Infinite as an adventure I shared with someone else.

Irrational packed every square foot of Columbia with audio-visual information. The floating city is a dystopia of early 20th century Americana mixed with the white supremacy, anti-labor rhetoric and propaganda of the Jim Crow South and modern-day right-wing zealots.

Columbia is a floating fortress that has taken the founding of the United States and twisted it into a religion. The city’s citizens literally pray to Benjamin Franklin, George Washington, and Thomas Jefferson. It’s an extreme take on the unquestioning reverence for America that echoes some of the rhetoric you might hear from the right-wing of the Tea Party. 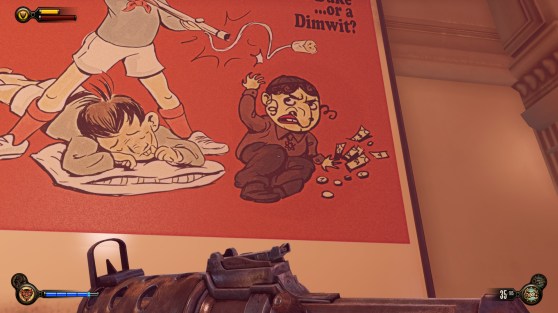 On Columbia, the “coloreds” and the Irish must use special bathrooms. A manufacturing magnate named Jeremiah Fink runs a labor city that has employees bidding on minutes’ worth of work. He’ll occasionally come on the loudspeaker to talk about how the lowly workers should be happy to avoid all the responsibilities of the white man.

One billboard shows a good little boy pointing his rifle at a horrifying caricature of a Jewish child. Another shows a white family under the words “Columbia Security: Protecting our faith, wealth, and racial purity.”

This kind of propaganda exists throughout Infinite, and you can’t help but stop and examine each one. Irrational’s artists did an amazing job capturing the grotesqueness of this type of racial imagery, and it transported me to something that I have only seen in history books and documentaries.

I also found myself compelled to explore every corner of the city in the possibility that I might stumble across some fresh bit of propaganda. Smartly, Irrational awards players who wander off the intended path. Nearly every dead-end has some kind of item, voice recording, or upgrade waiting for you.

Columbia also feels expansive. You can’t enter every store and home, but it never gets claustrophobic. You can take multiple paths, and if one street is blocked off, it’s because that part of town floated away. It’s an elegant solution to invisible walls.

Columbia is full of brilliant musical cues. Songs come across the radio. Barbershop quartets spontaneously appear on an airship and begin serenading you with an astounding cover song.

Nothing makes BioShock Infinite feel more like a bid-budget product than its use of music.

It’s not just that the songs sound good or pop up so naturally. It’s that they contribute to the storytelling. One of the first songs you hear is a metaphor Infinite. Another anachronistic tune helps flesh out the setting. The singing crowd helps guide you to where you need to go.

If the imagery and the music were constantly pushing me forward, the combat holds the varying sections together.

Shooting and using Vigors is a blast in two- to eight-minute chunks. One of the only battles that lasts longer than that gives you a unique and amazing ability near the end of the campaign. 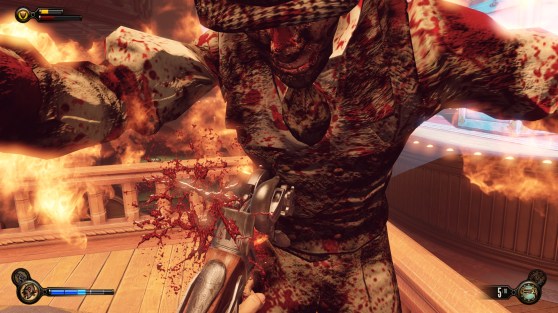 The skyline mechanic, a roller-coaster like rail system that DeWitt can travel on by hanging from his special hook, also mixes up combat.

Personally, I had more fun exploring the world, but that’s not because the combat is lacking. Irrational uses fights to break up areas, and in that way it keeps the game’s pacing in check.

I had a difficult time putting down the controller because I was always one more fight or one more area away from the next discovery.