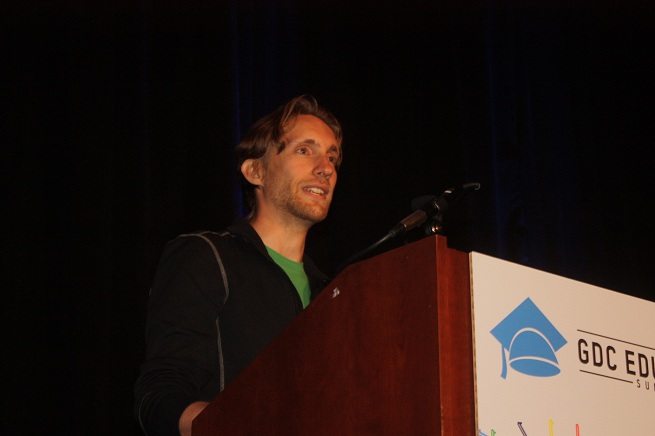 Getting discovered is often a matter of luck. For Ian Dallas, who headed the student effort that became the award-winning Sony game, The Unfinished Swan, it happened because of a student game festival.

Dallas created a working prototype that he entered in the 2008 Sense of Wonder contest at the Tokyo Game Show. Someone posted the demo on YouTube, and representatives from Sony saw it. They began talks and eventually came to a publishing agreements six to nine months later. And so began the work of taking the student project from prototype to finished game.

Dallas was a graduate student at the University of Southern California’s game design school. He worked on his idea for a game in a class and periodically went to visit a faculty member, Mark Bolas, to show prototypes. One of those days, he showed off “Whitespace,” where the idea was to explore a 3D world that started out with a blank screen. That became the core defining game mechanic behind The Unfinished Swan, which Dallas describes as a “first-person painting” game.

“That segued into The Unfinished Swan,” Dallas said in a talk at the Game Developers Conference today.

Dallas said he signed the deal with Sony because the scope of the project grew well beyond a game that three or four people could do.

“We wanted to make a bigger, prettier game,” he said. “We wanted to focus on making a game, not running a business. And the publisher had goals that were aligned with ours.”

The team at startup studio Giant Sparrow grew to 12 people and the original budget ballooned. It was supposed to be done by five people working for 18 months. But it stretched into several years. Dallas said he had to have a lot of conversations with Sony about that, but the good thing was that the team could show progress on each different piece of the game they were working on.

“And they liked it,” Dallas said.

Dallas said that the important lesson he learned as a relatively small developer was that it pays off to become fluent with game tools such as Autodesk’s Maya 3D rendering program, Microsoft’s Visual Studio, and Ai.

“There is a difference between knowing the tools and becoming fluent with them,” he said. “You want to get under the hood and do things they were not meant to do.”

When it came to making animations run fast, the fluency was important. It was also important because most of your time making a game is spent debugging it, he said.

When Dallas needed to explain what he had in mind for his animators, he did so by creating an animated demo that they could use as the foundation for their own work.

Dallas said that one class that proved valuable was a class on negotiation, taught by John Hight, an executive producer at Sony who worked on God of War. The negotiators could get a lot of work done, Dallas learned, if they assigned points to each item that was important to them. If the publisher really valued owning the intellectual property, they could assign a lot of points to it. That way, it was easier for each side to see what the other was driving at.

Dallas said it helped to have a lot of help from peer groups, to get feedback on his game from festivals, and to work closely with producers who “jump on grenades” in dealing with issues along the way.

When the team grew to more than seven people, it needed to have more formal communication, such as a weekly team lunch or a “daily standup meeting.” They used a Google Doc for task lists, so they could keep everything simple. But it wasn’t just ad hoc.

Of the things Dallas wished he had known earlier, he listed that it was hard to hire people. It also makes sense to fire bad workers early, because they can infect other workers. Overall, it turned out well for Dallas, who had one of the most recognized indie games of the year in 2012.

After the talk, Dallas confirmed Giant Sparrow is working on a new game.