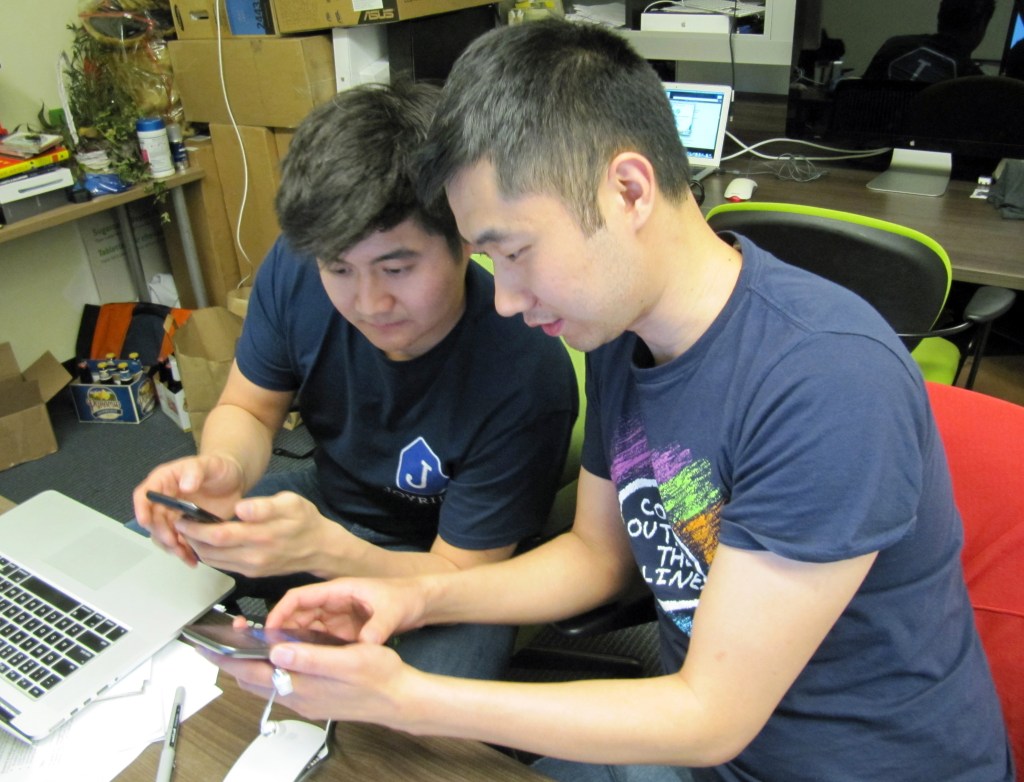 Americans spend 45 billion hours a year in the car, which is more than four times as much time as they spend on Facebook.

Joyride seeks to make this time more fun with voice-activated mobile applications that provide a safe and social way to spend the driving hours. The startup is launching publicly today after presenting off-the-record at the Founder Den Demo Day last week and announcing $1 million in funding.

Founders Jeff Chen and James Zhang previously developed Skyvi, a voice-activated media app which is like Siri for Android. They applied this expertise to creating the VoiceUI Architecture platform that forms Joyride’s foundation.

“We are not talking about a simple ‘navigate’ or text command,” said Chen during an interview at VentureBeat. “We are talking about a full-blown rich mobile application that is 100 percent hands-free and brings all the social fun pieces of the Internet to you while you are driving.”

The first application built on this voice platform is a trivia game. Your phone asks you questions about historical figures, landmarks, or events (and more) and provides clues. When you have a guess, you say it out loud, and you score points for being right. The game is what Chen describes as “fake synchronous.” You are neither playing against other people in real time or against a machine. Instead, you are matched against other players whose activity was already saved in the system. It gives the illusion of social connectivity — without the behind-the-wheel dangers.

“Internet penetration of the car is a big macro trend, and Internet usage in the car is inevitable,” Chen said. “Voice tech is finally getting really good, and with cloud services and connected devices, we are really seeing voice recognition where it can be great.

“The third factor here is social. People are super-bored while they are driving, and we think people want a social experience that is a safer alternative to mobile apps.”

The technology’s design has three criteria, according to CTO James Zhang. The first is a “reusable voice user interface” (VUI) that maintains data about certain commands. The second is how it handles arbitrary user input, or knowing what interactions apply to the app and which don’t. Third is the “equal coexistence” of voice and gesture user interface, all connected to the driver through the smartphone’s connectivity and an AUX jack or Bluetooth.

Down the road, Joyride plans to build a diverse library of applications on top of this platform that provide engaging in-car experiences.

“The most important thing is that people are suffering in their cars,” Chen said. “They are these tiny little boxes with tiny little windows and we are going to turn cars into starships and make it fun and interesting and even safer. This is just the beginning. It is a cool, untapped area that has a lot of potential.”

Investors see potential here, too. Freestyle Capital and the Cowboy Venture Fund, as well as angel investor Seth Goldstein, provided seed financing to to build out the engineering team and accelerate entrance into the market.