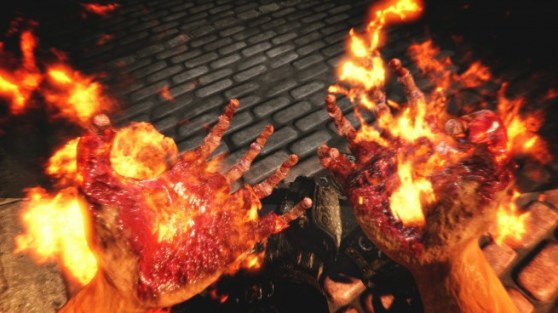 Welcome to GamesBeat’s BioShock Infinite guide. Instead of listing out its every facet for you, this spoiler-free guide will focus on the most useful weapons, Vigors, and Gear items.

Feel free to share your own combos and strategies in the comments below.

Above all else, the main thing that will help you dominate BioShock Infinite is looting. Loot everything! Desks, boxes, corpses, more boxes. You’ll get a decent amount of money this way but also lots of ammo, which can be just as valuable as money since you won’t need to buy any. Take the time to look around and do the side missions to find the secret areas or open the safes and treasure chests.

Vigors are BioShock Infinite’s version of Plasmids. They require Salts to use, so I recommend upgrading your salt capacity to 10 before wasting any upgrades on your health or shields. Then you can spam Vigors like crazy, and thanks to the Blood to Salt gear (see below), your Salts will automatically replenish.

Note that Vigors (like the Murder of Crows) can harm allies. I’ve never actually killed Elizabeth and don’t know if you can, but if you happen to find yourself in the company of other NPCs and are constantly stunning them with Overkill or unintentionally dealing damage with your traps, they will definitely turn on you.

Possession
Possession is the most vital Vigor. No matter what your playstyle or difficulty level, you’ll want to use Possession early and often to take control of enemy turrets. These gun emplacements can cut you down quite easily, especially when you’re trying to fend off a dozen other attacks. Converting them not only means you won’t be attacked but that you’ll also have a powerful ally to help in the ensuing gun battle.

Note that Possession doesn’t last forever. Possessed humans will eventually kill themselves when the Vigor wears off, but turrets will return to their hostile state. Sometimes it’s best to take a turret out first by turning it against its own people, who will then eventually shoot it down for you.

Also, dropping a Possession trap will affect multiple human enemies, but since you can only ever possess a single target at a time, all but one of them will immediately kill themselves.

Devil’s Kiss
Devil’s Kiss is the first offensive Vigor you get, but it’s useful for pretty much the entire game. Some enemies are immune to fire attacks, but for the most part, you can lob Devil’s Kiss into crowds for notable amounts of damage.

Shock Jockey is a good alternative later on, but with the Overkill gear, it’s slightly redundant.

As you can imagine, this creates a very potent chain reaction where entire waves of enemies can get caught in the traps created by their fallen comrades while you use them as target practice.

Return to Sender
This Vigor creates and holds a shield that blocks incoming projectiles and then fire them back at your enemies. You can upgrade it to absorb ammunition, adding to your own.

On the harder difficulties, Return to Sender is vital for certain enemy encounters, especially motorized Patriots.

“Gear” in BioShock Infinite are four different types of items that you can equip to gain special perks.

Get any Gear item you want
Gear pickups change each time you reload a checkpoint. So if you get one you don’t want, reload the last checkpoint and try again. If you find an area with a really close checkpoint, it’s definitely worth it to take the time to get the Gear you actually want.

The Winning Strategy
Below I’ve highlighted some of the most useful Gear items, but the two most important ones are Blood to Salt and Overkill. Blood to Salt means you’ll (almost) never run out of Salt in the middle of a battle, which is invaluable. Trust me, you’ll see. And Overkill means that almost every enemy you kill will stun all nearby enemies for a short while. But then if you kill one of the stunned enemies, all the survivors will get stunned again. You can repeat this tactic endlessly. Combined with the Murder of Crows loop described above, most enemies will never stand a chance.

A few notes: Melee is only important early on. Once the enemies get heavier and use projectile weapons, you’ll want to fight from afar, especially on the higher difficulties. That makes any melee-related Gear items obsolete pretty quickly.

A few Gear items also really help you dominate while using Sky-Lines. If you’re having trouble with a section that uses Sky-Lines, consider switching over to these items temporarily. I wouldn’t recommending using them all the time, however, as Sky-Lines aren’t common enough to make it worth sacrificing all of the other great Gear. 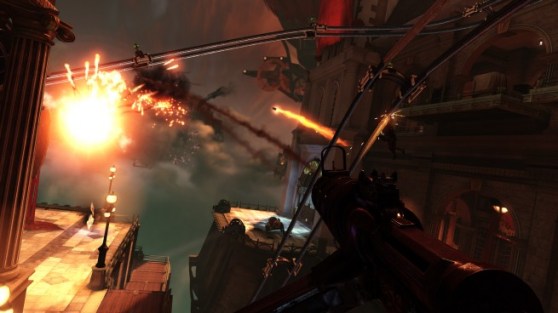 Weapons, more than anything else in the game, really come down to your own personal playstyle. You can only equip two at a time, but you’ll have ample opportunity throughout Infinite to try them all and see which you like the best. I found that almost all of them are adequately powerful even when not upgraded whatsoever (spend your money on Vigors!), and I used some combination of the Carbine, Shotgun, Sniper Rifle, and Volley Gun for most of the campaign. That last one is especially useful against heavy enemies and bosses, and it carries more ammo than the RPG.

BioShock Infinite is an easy game, even on Hard. In fact, I’d recommend playing on Hard even if you’re even average at first-person shooters. That may be disappointing for a lot of fans hoping for a real challenge, so then you might be wondering about the highly touted 1999 Mode, which unlocks after finishing Infinite for the first time (or you use the Konami code at the main menu to start on 1999 right away).

Unfortunately, it’s essentially just a Very Hard mode, which in BioShock Infinite terms just means “moderately difficult sometimes.” The whole “having to pick a specialization” just means you don’t have as much resources to buy and upgrade everything, nor do you need to. With the go-to combination I mentioned above (Murder of Crows, Overkill, Blood to Salts, long-range weapon of choice), most enemy encounters are a breeze regardless of what difficulty you play them on. Use cover, go slow, and handle turrets first before running into a room full of enemies guns blazing.

One last thing, for any difficulty: Never resurrect! Dying and resurrecting costs money. Instead, just pause and reload the last checkpoint. It’s basically the same thing only you won’t be poor.

Although you’ll get a large number of Achievements just through natural play, don’t sweat if you missed any. After finishing the game, you can replay any chapter, which is perfect for going back and finding missed collectibles or getting the Achievements for X kills with a specific weapon/Vigor. Just remember not to buy any items from the Dollar Bill vendor during your 1999 playthrough.