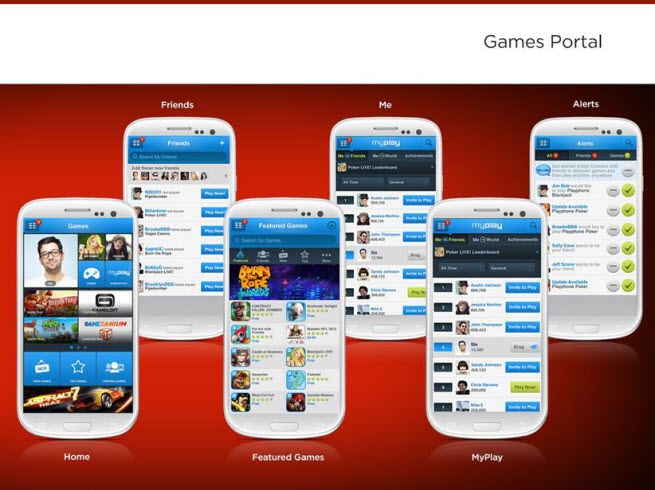 Verizon is preparing to launch a game portal (pictured above) on its network that uses technology from social mobile gaming platform PlayPhone.

San Francisco-based PlayPhone announced today that its software development kit is the backbone for a new games portal launching on the Android portion of Verizon’s wireless network. The portal will give vast exposure to mobile-game developers thanks to the massive distribution network and monetization efficiencies of Verizon. The company made the announcement at the Game Developers Conference in San Francisco.

To get their games on the portal, developers can use the PlayPhone SDK, which makes it possible for an Android smartphone user to keep up with friends and play free or premium games against them.

As we’ve noted before, PlayPhone launched its smartphone social gaming network in December 2011 and beefed it up again in July 2012. It bought the mobile marketing firm SocialHour in March for $51.5 million in stock.

PlayPhone’s entry is going to make the market a lot more interesting for developers and consumers as the company hopes to differentiate itself through cross-platform gameplay, payments, and social functionality.

PlayPhone has created a free-to-play app that runs on the Apple iOS, Android, and HTML5 platforms. The app lets players socialize with each other and play the same online multiplayer game across different types of smartphones and tablets.

A user with an Android phone can play at the same PlayPhone Poker card table as someone with an Apple iPhone. They can send messages to each other and chat back and forth. They can sign on once via Facebook and quickly access all games. They can also buy poker chips via the Apple App Store through in-app purchases or via PlayPhone’s other payment options.

PlayPhone has its own virtual currency (Playcredits), and users can access various carrier billing and payment options even on a closed platform such as Apple’s iOS. They don’t have to exit a game to pay for a virtual good. Czerny said that the company has relations with more than 100 global carriers. PlayPhone is a preferred direct-billing partner with both AT&T and Verizon in the U.S.

While Gree and DeNA/Ngmoco have strong bases in Japan, PlayPhone was founded much later and has a smaller number of users. But the company began building its mobile social network in 2010. Gree also recently shut down its OpenFeint platform, angering a lot of developers.