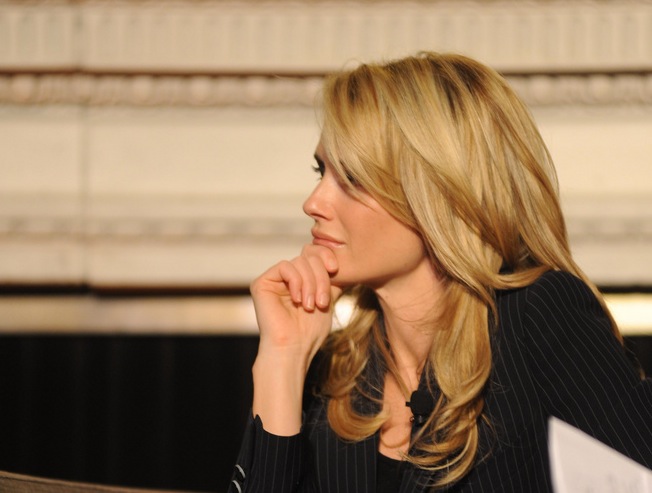 The wife of California Lt. Gov. Gavin Newsom, Siebel Newsom explored this issue when producing and directing the documentary film Miss Representation, which is highly critical of the media and entertainment industry’s portrayal of women.

“Gamers have the opportunity to think bigger,” said Siebel Newsom. She cautioned the audience to avoid following the path of the entertainment industry by perpetuating gendered stereotypes.

“We have an opportunity in gaming to teach young boys to value women — to not perpetuate these extremes of masculinity,” she said.

Siebel Newsom was joined on the panel by Belinda Van Sickle, chief executive of Women in Games International; and Sega’s Patrick Riley. The speakers noted that in the gaming industry as a whole, women are still a rarity — only about 12 percent, according to Van Sickle. 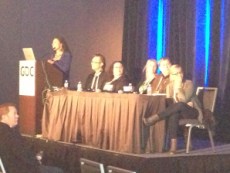 Above: Panelists at a ‘women in gaming’ panel at GDC

This gender imbalance was clear at GDC — among the relatively small number of women I saw at the Moscone Center, far too many were dressed provocatively to promote products. And despite the impressive lineup of speakers, few people attended it.

But the panelists are optimistic about the opportunity for community-building for women in gaming.

Similarly to the broader tech movement, where groups like Women Who Code and Women 2.0 are gathering steam, female gamers are forming bonds.

“There was not a strong community of women in the game industry,” said Van Sickle when asked about the motivation behind starting her organization, Women in Games International. But she said that membership has steadily grown, and the industry has become more inclusive.

This optimistic view for the future was shared by Riley, a product lead for Sega who was pleasantly surprised by the recent reaction to casting a female lead in a game. “People embraced it,” he said.

Still, the panelists said that the problem won’t be fixed overnight. They agreed that more young girls need to be proficient in the STEM family of subjects (the term stands for science, technology, engineering, and mathematics) before we see increased diversity in the industry.