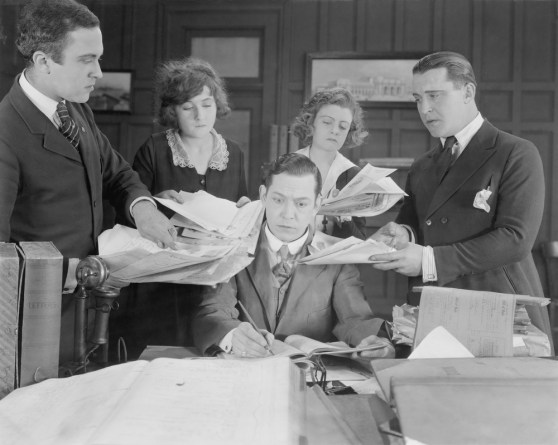 Mark Curtis starts by telling a story. The Egyptian king Thamus is visited by the God Theuth, who offers a gift to the people of Egypt, the gift of writing. To the God’s surprise, the king refuses the gift, saying that his people would lose the ability to remember if everything were written down. “For every step forward in technology,“ says Curtis, “you lose something and you gain something.”

Curtis is the co-founder of service design agency Fjord, which works with large companies like banks and mobile operators — the kind of companies we all love to hate but whose services we rely on every day.

Curtis is also the author of “Distraction: Being human in the Digital age.” Distraction was published in 2005, but its concerns — how technology is changing our notion of space and time and making us prefer the distant to the close at hand — are even more relevant in the age of the smartphone.

“Technology distracts us from the here and now by opening up avenues of possibility to the rest of the world all the time. Those avenues are deeply distracting because what could be over there appears to be more exciting than what is in front of us right now,” explains Curtis. In the same way that it was 80 years after the invention of the automobile before countries started to make seatbelts compulsory, Curtis contends that we haven’t yet defined ways of counteracting the negative effects of technology.

“Technology has created a permanent fifth dimension in our lives – virtual space. Every time human beings have perceived a new dimension, it’s led to seismic changes in society. We moved from thinking in two dimensions in Medieval art to three dimensions in the Renaissance. In Dante, Heaven and Hell were in a direct line up and down. At the same time Copernicus and Galileo started to realize there was something called space, which completely undermined the whole notion of Heaven, because if space is infinite then where is Heaven? That fundamentally changed the way we see everything.”

That fifth dimension also creates a challenging design problem that Fjord is tackling by reducing the amount of cognitive effort required to absorb information. “One of my colleagues calls it ‘design for the glance’,” says Curtis. The device best designed for the glance is the wristwatch, and Curtis expects to see plenty of products for the wrist following the flawed but groundbreaking Nike+ Fuelband.

Curtis points to David Kahneman’s book Thinking Fast and Slow, in which he explains that the brain works in two ways. “System 1 is where I say to you ‘What’s 2+ 2?’ You know the answer immediately without having to think about it. System 2 is where I say ‘What’s 24 x 17?’ Your brain then goes into lockdown because of the cognitive effort.” Fjord is trying to design nudge services into the realm of system 1 rather than system 2.

Last year Fjord created a new mobile app for the Swedish mobile phone operator 3, which displays all the information about a customer’s bill and usage using simple data visualizations. “If I want to know my own data usage, my carrier says ‘You have used 320 MB out of 1,024 MB and it’s now Feb 25’. What do I do with that information? I immediately have to go into system 2 to figure it out.” 3 itself offered over 200 different subscription models. My3 displays a visual snapshot of usage and trends over the past six months as well as showing how the bill compares to that of a typical customer. Hundreds of thousands of customers now rely on the service.

Banks and payment companies are also starting to think simple. “Paypal and Square have been brilliant at simplifying, although largely for merchants rather than customers.” Fjord itself produced a new set of mobile applications for the Spanish bank BBVA that now have 1.2 million users. Recent usage statistics show that customers log in 21 times a month on the mobile apps versus three times a month on the web site.

The next frontier in service design is what Fjord calls living services, where the same service is delivered via a whole plethora of interfaces and becomes ever more atomized. “We are already seeing financial services clients saying how can we break up what they do into little chunks which other people can use in discrete ways. Spotify, for example, will deliver the service in my car, through my phone, through my PC, through my Sonos system at home mediated by Ford or Apple or Android or Sonos.”