A new Apple patent published today reveals that Apple is thinking about flexible wrap-around displays built into a transparent housing. It’s likely a design direction for a curved future iPhone, but it’s also possibly a stealth patent filing for an iWatch that makes just a little more sense than previously revealed. 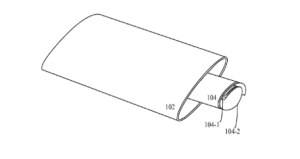 Above: The transparent conical housing with a flexible display being inserted

Apple’s new patent is for a “consumer electronic product” with a flexible display that rolls up when needed, and unrolls if desired. In the patent claims, Apple says it could fit within a conical glass housing — a flattened oval — which would allow the display to be visible on any portion of the device.

In other words, your phone no longer has a front or back … just whatever side you happen to be looking at.

The device as patented includes facial recognition and user-sensing technology that determines which side is within your field of vision at any given time and selectively displays content and controls only where you can see them.

As such, it’s an interesting response to Google’s backside control patent, which describes controls built into the back of your phone to allow you to flip screens, turn pages, or control music without taking up front-screen real estate. Apple has a previous patent on similar backside controls, but this is more radical. 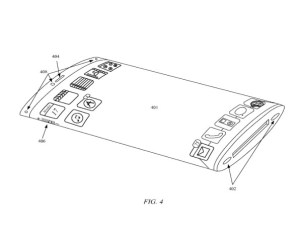 Above: The flexible display inside the transparent glass housing

What’s interesting to me, however, is the flexible AMOLED display that rolls up and unrolls (see image gallery below, especially the fifth image). It’d be a perfect display for a sort of iCuff — a full phone built into a product that rides on your wrist.

The concept of iWatch as a peripheral to an iPhone has never made a ton of sense to me. If I already have a phone, it is already either on my person, or close enough for easy checking. A peripheral that simply enables notifications from my phone and perhaps has a few other self-quantification features doesn’t seem to be enough to make it worthwhile.

Rather, it makes more sense, potentially, to provide the entire phone (read: portable computer with communication capabilities) in a flexible cuff format that now comes with a handy new carrying case: you.

And, of course, if you want your full screen to be available, you simply unroll the cuff and snap the screen flat.

It would certainly solve the phone-in-the-pocket problem while still keeping your hands free for whatever you need to carry or do. And it’s built-in hands-free for while you’re driving.

More images from the patent application: