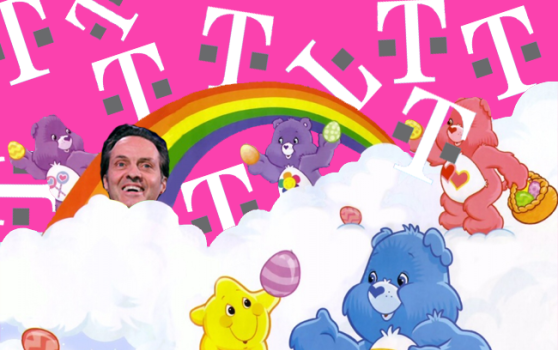 T-Mobile’s pitch is that being the friendly, open “uncarrier” will help it become the Shangri-la of mobile networks: Consumers will be so spoiled, happy, and carefree that they’ll never want to leave T-Mobile’s loving arms — even if doing so is really easy. “Why sign up for an abusive two-year contract with AT&T when you can get almost the same deal with your Benevolent Uncarrier?” this coddling T-Mobile asks.

But let’s be specific. Here’s what T-Mobile is pushing:

This all sounds too good to be true. LTE? No contracts? The iPhone? How can the in-distant-fourth-place T-Mobile possibly pull all of this off and still manage to stay afloat?

As it turns out, T-Mobile really has no choice but to do all of this.

Right now, the network’s most pressing problem is its subscriber base, which shrunk by over a million people last year. Lots of these people left because T-Mobile didn’t carry the iPhone, but others left because T-Mobile’s aging 4G network was showing its age in comparison to the faster LTE networks of AT&T and Verizon. (Also — did I mention the iPhone?) 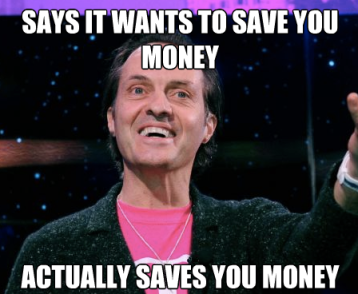 Above: Still too good to be true.

The network factor here can’t be ignored, as it’s probably the biggest thing preventing T-Mobile from realizing its smartphone eden. According to analyst Jack Gold, one of T-Mobile’s biggest hurdles down the line will be responding to the impression — however real or imagined — that its network as bad as everyone thinks it is.

Sucky networks aren’t exactly a new problem, but they’re something mobile subscribers have had to deal with — because they’ve been forced to. Two-year contracts are legal prisons, and the process of switching is often more trouble than it’s worth. As much as it stinks, smartphone owners are often stuck with whichever carrier helped them get their phones.

But that dynamic goes out the window with T-Mobile’s new contract-free focus: Now its network has to be good. Otherwise, customers can just pay off their new iPhones and run back into the arms of AT&T when things go sour.

“If you’re going to be open, you have to be good. Otherwise, the customers are gone,” Gold said.

The double-edged sword of success

There’s another possibility here, to0: What if T-Mobile is too successful? What if so many new customers sign up with their data-hungry smartphones that T-Mobile’s LTE network buckles under the load? This, again, would drive customers away.

But is that a real danger? Not in the short term, says Gold. Right now, T-Mobile has more pressing things to worry  about — like actually adding subscribers in the first place.

“If T-Mobile suddenly added 50 million users, sure, their network’s going to have a problem. But they have a long way to go before they get there — their network has room to expand,” Gold says. (T-Mobile currently has roughly 30 million subscribers.)

And then there’s the Verizon and AT&T factor. As with the introduction of shared data plans or the shift from post-paid to prepaid plans, what T-Mobile is doing here is new and very different. How long will it be until other carriers follow suit? That’s still up in the air.

“If this works, it’s going to put pressure on the other guys, but I don’t think Verizon and AT&T are going to act quickly,” Gold said.

Seeing as how AT&T’s reaction to T-Mobile’s announcements was a yawning “whatever,” something tells me its going to be quite a while before we similar efforts coming out AT&T. And that’s obviously good news for T-Mobile.