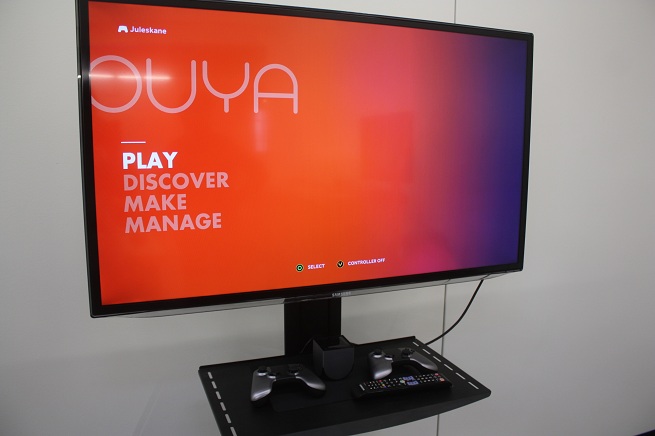 Ouya has begun shipping its $99 Android game console to consumers who pre-ordered the system and backed the company’s successful crowdfunding campaign. 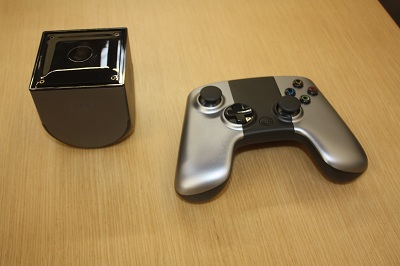 The San Francisco company is celebrating the launch with a party Thursday evening near the Game Developers Conference in San Francisco. The event is the first time the company is inviting the full community of game developers to come out and celebrate the company’s attempt to disrupt the traditional game consoles with free-to-play mobile games on the TV.

“Our early backers get to play around with the machine for the next two months and discover new games,” said Julie Uhrman, chief executive of Ouya, in an interview with GamesBeat.

Checking out the hardware

Ouya is an Android game console with a Tegra 3 mobile processor from Nvidia and an open platform that welcomes hundreds of free-to-play mobile titles. In a hands-on preview with GamesBeat, the company showed off how it intends to display those titles in the living room. 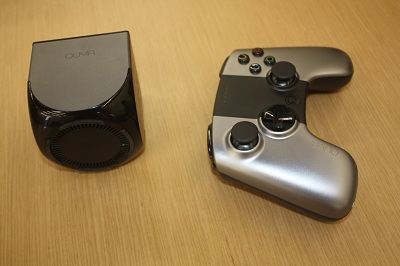 Kellee Santiago, former chief executive of Thatgamecompany, (the indie developer of Journey) has begun curating titles in her role as head of developer relations. In the past two months, developers have gotten their hands on prototypes for making games, and about 40 are already adapted to run on Ouya, said Uhrman. As many as 400 will be ready for the console when it ships to retail stores on June 4.

We got a good look at both the user interface for the console and its new games. The look and feel of Ouya is pretty on the big screen, but the company doesn’t have any killer games yet.

Ouya will hopefully have better games when the console is available in June in stores including Best Buy, Amazon, Target, and GameStop. In the meantime, the company will send consoles to tens of thousands of people who pledged funds and helped it raise more than $8 million in the largest game crowdfunding project on Kickstarter. 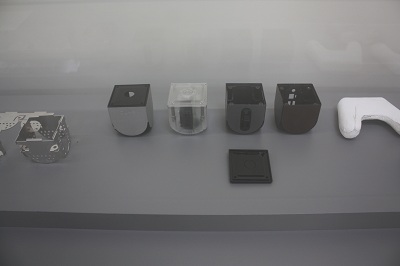 The final device was created by famous industrial designer Yves Behar, who went through a variety of designs (pictured right) before settling on the one above.

The designers also went through a number of controller designs (pictured below) in a quest to get something that gamers felt comfortable with.

The team had to switch from an oval-shaped D pad to a cross-shaped one to avoid accidental pushes. That was a feature which the company changed because the community wanted it. The controller face plates (held on by magnets) are removable and customizable.

The controller’s battery is removable and accessible via a pull-out cloth. The controller buttons spell out the letter O-U-Y-A, as the community voted. The controller is fairly heavy at 9.5 ounces, but it doesn’t precisely resemble either a PlayStation or an Xbox controller. The surface of the handles are made with brushed aluminum, and the device has a single-touch touch surface control on its top center area.

“You can see the whole evolution of the design in a transparent way,” Uhrman said.

Uhrman said the mix of titles will include AAA game publishers, indies, newcomers, and titles with a wide variety of monetization practices. One free title will accept donations. Others will let you play for a time and then unlock paid features. Still others will release games in episodes. The machine will display games in 1080p high-definition resolution. 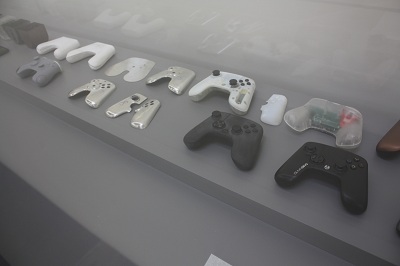 The final 10.5-ounce box hardware features brushed aluminum. Those who donated more than $10,000 in the Kickstarter campaign will get their names on the console. The device is about as small as a Rubik’s Cube (OK, more like a large one) and it has a grill for air flow at the bottom. On one side, the box has slots for Ethernet, HDMI, USB, and micro-USB connectors. It is WiFi-enabled and the controller (pictured above) talks to the console via a Bluetooth connection. Extra controllers will cost $49.

Uhrman said the machine is made for hackers. It has four hex screws that hold on the main panel. They can be easily removed so someone can look under the hood.

When a user fires up the console, they can register and create a name. On the colorful homescreen are four clickable words: Play, Discover, Make, and Manage. With Manage, you can control your settings.

“It is a simplistic and a minimalist design,” Uhrman said.

When you click on Play, you can browse through the games that you have downloaded. With Discover, you can go shopping in the store to find games. Ouya will feature games itself. It also categorizes the games in the store through categories such as Retro, Hear me (sound), and Genres. The genres include platformers, short on time, puzzle-trivia, FPS shooters, fight, and sandbox. Games are displayed based on their ratings, and the ratings are set through a variety of engagement metrics. If you like a game, you can give it a thumbs up.

Under Make, developers can upload their builds, download software and read news about the Ouya Development Kit. The user interface is attractive and functional. It doesn’t get in the way of having fun.

A look at the games

This is where Ouya falls short for now. Only a handful of titles are available now for people to play. They include Beast Boxing Turbo, Gunslugs (arcade action), Puddle (physics puzzle platform), Saturday Morning RPG (role-playing game), The Pinball Arcade, Wizorb (run-and-gun action), Fist of Awesome (a time travel adventure reality game), Evac, Chomper, Canabalt, The Ball (shooter with puzzle elements), and Stalagflight (an indie game made in 72 hours). Final Fantasy III is an exclusive for the TV. More are becoming available by the day, but it is safe to say that many of the current titles are simple ports, not must-have exclusives. I didn’t get much time with them, but the “endless runner” game Canabalt seemed like one of the best.

Uhrman said that the company has more than 8,000 developers signed up. Of the titles available, one out of five developers have never built a game before. Well-known developers such as Paul Bettner, Kim Swift, and Tim Schafer’s Double Fine productions are working on Ouya games. Phil Fish is working on a version of Fez.

So far, Ouya has a lot of promise. It has made it further than anyone ever thought. But we’ll withhold judgement until we see and play more games.