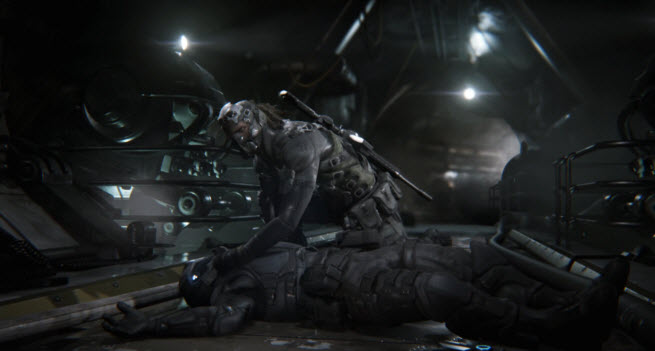 Epic Games is adapting its Unreal Engine 4 — the latest tool for making games with spectacular 3D graphics — so that it can run on everything from mobile games to high-end PCs. The company also showed off a demo, dubbed Infiltrator, that shows what a next-generation game will look like.

On top of that, Unreal Engine 4 will now be used in games that run on the web, with no plug-ins, based on web standards such as HTML5. That means that games that are embedded in web sites will have great 3D graphics, and the user won’t have to download a big file in order to initialize them. Using the WebGL standard, Unreal Engine 4 can run on a browser at near native performance, meaning that it can run on the web and tap the 3D graphics technology in any client hardware.

“Unreal Engine is kicking ass,” said Mark Rein, vice president at Epic Games, in a press briefing this week at the Game Developers Conference in San Francisco.”It will fit all genres and all business models. You never outgrow Unreal.”

Epic Games is marketing the new engine as a “game factory of the future.”

The ability to run on the web is significant, since gamers would normally have to launch a big download for a big 3D game. They would have to wait for the download to finish, and the risk is high that the user will cancel the download. That results in lost sales for game companies. Martin Best, game platform strategist at Mozilla, maker of the Firefox browser, said that the performance on the web is good and instantaneous.

In the past year, Unreal has powered a number of high-end games such as DC Universe Online, Tera, Bless, Blacklight Retribution, Hawken, Chivalry, Day One, and Antichamber. Epic’s own upcoming game Fortnite will also use the new engine. While tools from Unity Technologies are being used in a lot of mobile games and simpler 3D cross-platform games, Unreal Engine commands the high-end of the game market.

“Four of the top 10 highest-rated Xbox 360 games of all time were made with Unreal Engine,” Rein said.

Still, Unity has been making gains as it rises from the low-end of the market. David Helgason, chief executive of Unity, said in an interview with GamesBeat that his company has had more than 1.5 million downloads of its game engine. Unreal, meanwhile, has had 2 million unique installs, Rein said.

Rein said that Epic Games has made a big advance in delivering a game prototyping tool for artists that can render what a change in a 3D scene will look like in real-time. The tool is intuitive and menu-based, so that the artist doesn’t have to understand code. That makes the artists much more productive because they don’t need a programmer to hold their hands. That, in turn, can help lower the cost of a game dramatically. One game called Daylight was built in under six months with the earlier Unreal tools, using only six developers.

“You can effectively do something that used to take a massive team of programmers,” Rein said.

Scott Fitzgerald, technical director at Epic’s rival Crytek, said in an interview with GamesBeat, “I’m not impressed. We’ve had that since 2002.”

The Infiltrator demo allows artists to create a complete world that you can see for miles and miles, with everything rendered accurately with realistic shadows and lighting.