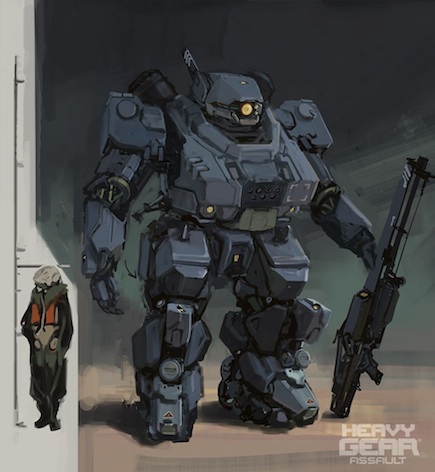 Unless you’re playing competitive multiplayer games at a professional level, you don’t have much incentive to get better. Positive kill/death ratios and a high-ranking might snag you a fancy new logo for your gamertag or maybe a shiny weapon skin that not too many other players have, but that’s usually it.

MekTek Studios takes it one step further. It wants to transform the best players into e-sports stars.

The developer has ambitious plans for Heavy Gear Assault, a first-person multiplayer-only mech simulator coming to PCs in 2014. It will be the first title in the Heavy Gear universe (which started life as a table top role-playing game nearly 20 years ago) in over a decade. MekTek is bringing back the franchise in style: It’s using Unreal Engine 4, the newest iteration of Epic Games’s tool for next-generation development.

The first teaser trailer (embedded below) is all in-game footage, and I’m told this is what the final product will look like when it releases later next year.

Are you not entertained?

Heavy Gear Assault has its sights set on the exploding e-sports scene. Gameplay revolves around a gladiatorial arena where giant robots and their pilots fight each other for fame and money. You can obliterate the opposing mech’s limbs and weapons using your own guns or get up close with swords and hammers. All of this carnage takes place on a battlefield with destructible terrain.

MekTek had an early demo to show during the Game Developers Conference, depicting just the arena and basic combat skills. Since it’s a simulation, controlling a mech requires a bit more dexterity than the usual first-person shooter: The mouse controls the direction your torso is facing and WASD keys handle the legs. Mechs accelerate like cars, so the longer you hold down the keys, the faster you’ll move. When I fired my rifle at the player next to me, his armor gradually twisted and darkened from taking too much damage. 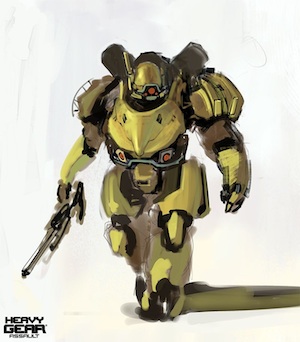 The edges of the arena contained sections for audience members. When the game is live, these avatars will represent real players watching a match. But they aren’t passive observers; they have the power to influence a fight. If they don’t like what the participants are doing or if they’re just bored, they can activate environmental hazards in the arena by voting. If enough people vote, the fighters will have another obstacle to deal with as they lunge for each other’s throats.

The audience can also grade their performance, which will affect the fighters’ reputations. It wasn’t clear what happens if a player has a bad reputation, but Mektek hopes this system will encourage good sportsmanship — by weeding out jerks and cheaters — in the community.

If you have an entrepreneurial spirit, you can even sponsor mech pilots with your in-game money (earned from winning matches) and follow their exploits throughout different tournaments, leagues, and seasons. Alternatively, you can place bounties on players’ heads so you don’t have to do the dirty work yourself.

The features sounded really exciting, but at this early stage in the development process, it’s difficult to tell if they’ll actually pan out. 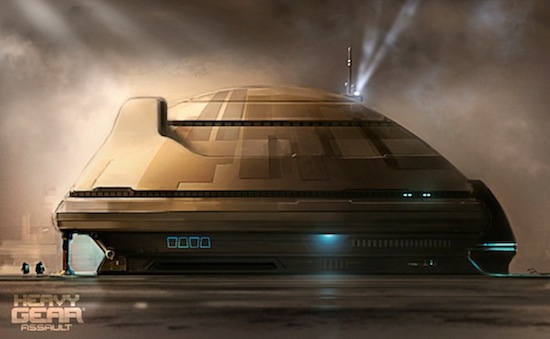 Above: Concept art for the arena.

MekTek is adopting the popular free-to-play model for Heavy Gear Assault. You can either play the base game for free or sign up for a premium subscription, similar to free-to-play massively multiplayer online role-playing games (such as Star Wars: The Old Republic).

Premium subscribers (for a rate not yet finalized) will have more benefits in the long run: discounted prices for cosmetic improvements like new pieces of armor and invitations to exclusive tournaments and events are just a few rewards the developers have planned.

Currently, MekTek and Heavy Gear Assault publisher Stompy Bot Productions are running a pledging campaign on its website to help fund the game with a simultaneous crowdfunding initiative launching on Kickstarter in two weeks. The goal is to raise $900,000 (so far they have $100,000). If all goes well, a beta version will come out some time in the first quarter of 2014.