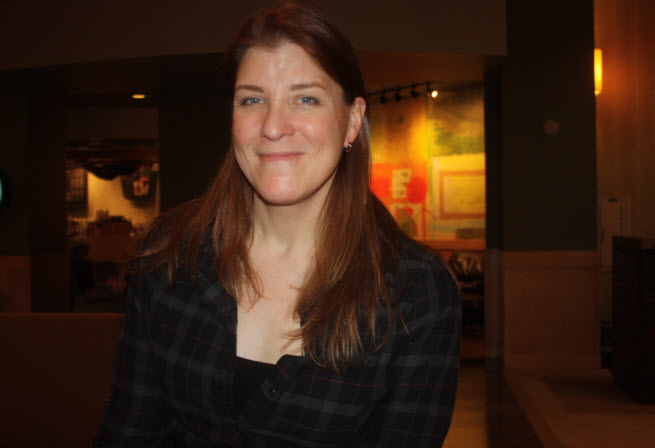 Kate Edwards has had a long career in video games, and now, she has become a leader of the industry. In December, Edwards became executive director of the International Game Developers Association. Her job is to run an organization with 10,000 members who are navigating all of the big changes in the game industry.

At Microsoft, she was the first “geopolitical strategist” who had to identify geopolitical and cultural land mines for the company as it moved into different regions of the world. She implemented a geopolitical quality review process for Microsoft’s games from 1995 to 2005. She worked on titles like Dragon Age: Origins, Dragon Age 2, Call of Duty: Modern Warfare 3, Star Wars: The Old Republic, and other releases. She was the founder and chair of the game-localization special interest group within the IGDA and a leader in the IGDA Seattle chapter. She runs her own consultancy, Englobe.

This week, she attended the Game Developers Conference in San Francisco and had to handle the tough issue of women in games, particularly as a dispute erupted among IGDA members about an IGDA-sponsored party where scantily clad female dancers appeared. We sat down with Edwards on Monday, March 25, before any of that happened. Here is our edited transcript of our interview.

GamesBeat: How big is the IGDA now?

Kate Edwards: We hope to approach the neighborhood of 10,000 members by the end of this year. That’s the overarching goal. We have about 90 chapters worldwide. We have 20 or 25 special interest groups.

GamesBeat: How would you describe the IGDA to people who don’t know what it is?

GamesBeat: Has the membership been growing?

Edwards: It leveled off for a while. Part of that is due to the structure of how we do membership, with studio affiliations versus individual memberships. We’ve gone through some adjustments there. That added to a bit of a plateau. Plus, with the industry being the way it is these days, that affects membership to a degree. We see studios that close, like 38 Studios for example. The members retain their membership, but the studio affiliation goes away.

Edwards: I like to the word “evolving.” That’s the way I see it. This is still a relatively young industry. It’s finding its way. We’re so receptive to the technology that arises in how we deliver and how we develop. It’s only natural that we’ll see a bit of evolution. Some things are going to die off and some things are going to rise. It’s not something that we necessarily want to see, when we see people laid off. It’s not a good thing. But unfortunately or not, it’s a natural part of a changing industry.

GamesBeat: Has anybody done a lot of tallying up there, working out whether they see growth or change like that?

Edwards: We have not done that kind of thing, no. We do the quality of life survey, which is an empirical survey along those lines. The latest one came out recently. But we don’t focus on the numbers as far as layoffs. That’s something that the ESA would know better than we would.

GamesBeat: It’s good that people do surveys, but yeah, I do wish there was more information to give people, a way to give them sound advice. “Okay, here’s where the wind is blowing. Go in that direction.”

Edwards: Within the IGDA, the chapters do communicate with one another, which is one of the strengths of the organization. Developers who are in the IGDA can do that. They can reach out to other chapters. “My studio is downsizing in Boston. I might move to San Francisco or Los Angeles. What’s going on out there?” You get a lot of qualitative information. You get some quantitative information on a per-studio basis. Someone in L.A. might chime in and say, “My company has 35 positions open.” I know it happens at that individual chapter level, but there’s not any oversight quantifying all of that.

GamesBeat: Has that quality of life gotten any better?

Edwards: It’s changing. In general I think the trend is better. Studios are getting more aware. A lot of times [quality of life] is equated with the notion of crunch. We like to look at something broader. It’s not just the crunch mode issue, although that tends to be a major issue. More studios are aware of it. That doesn’t mean all studios don’t do it, but they’re more aware of it. I was at Microsoft for 13 years, and even within my time there, the company became far more aware of work-life balance issues and all the other things that go along with them, for all kinds of good reasons.

GamesBeat: I wondered if some of these problems would carry over from the console business into the mobile and social studios.

Edwards: I think that’s inevitable. They’re going to carry over to some degree. When you’re self-employed or a small shop, you tend to have more control, but that affects your time schedule. It affects all kinds of other things. A lot of the indies that I know, or smaller studios, that’s one of the reasons they might have left a larger developer. They felt they would have more control over their work-life balance, and they do for the most part. At the same time, I’ve seen some of those small studios go through the same issues as any large studio. It comes down to promising a date and not delivering. That’s a reality in any business, not just the games industry.