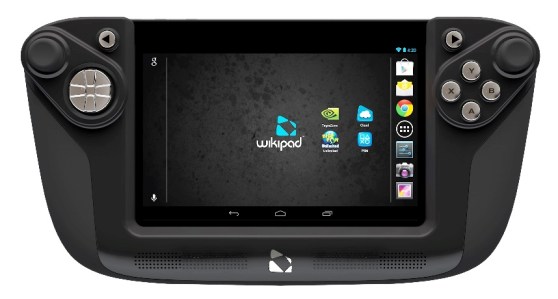 If this is the alternative, then those despised virtual touchscreen controls may not be so bad after all.

The Wikipad gaming tablet, due out this spring for $249, answered the call. Gamers hated playing traditional console-style action games using pretend analog sticks and buttons on flat mobile touchscreens. Without the tactile sensation of actually pushing something with your thumbs, you just couldn’t get the same responsiveness as you would with standard joypad controllers or systems like the PlayStation Vita. So what to do? The best-of-all-worlds solution seemed easy enough: Pair up a gaming-capable tablet with physical controls.

It was a great idea on paper, but someone forgot to write “good design” on that same sheet.

The box is actually really nice and deserves some mention. It has a soft-rubber coating, slick photography and typography, and molded foam inserts to hold everything snuggly in place. Wikipad’s packaging was perhaps the most impressive part of the entire product. While opening it up, I felt like I was unwrapping an expensive, high-end gadget — something that belongs in the Apple store or, at the very least, behind a locked glass case at Best Buy.

It’s a bit like putting an Armani suit on a hot dog. 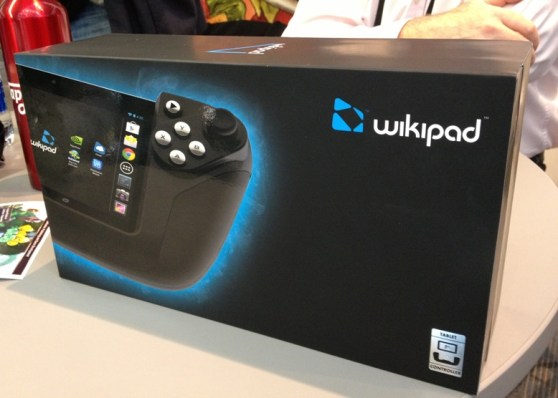 Maybe that’s a little harsh since the tablet itself is fairly nice as well, and that’s what most of your money is going toward. It has a 7″ screen and boasts an Nvidia Tegra 3 quad-core mobile processor. It’s a lightweight-yet-powerful Android alternative to the iPad. (See the full specs here.)

On the back is a rubberized skin, with raised ridges that form a rectangular-shaped box.

These ridges not only help you grip the Wikipad when it’s out of its controller holster but slightly elevate the tablet when it’s resting face-up. The idea is to make sure the speakers get more breathing room and can clear the table the device is lying on for better sound output. 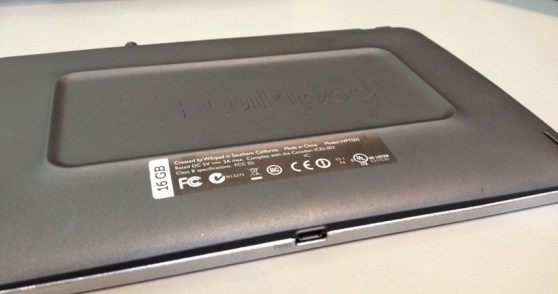 So far, so good, but you’re probably not curious about the Wikipad because of those ridges (or even the base tablet itself) — you want the console-like controls. While they functionally work just fine — the analog sticks and buttons do what they’re supposed to do — they feel so utterly cheap that you wonder if the packaging costs more to manufacture.

The buttons and D-pad look like they’re made of low-grade plastic painted in a crappy shiny chrome (like the original Xbox 360 disc-tray covers). The entire controller cradle is way bigger than you would expect of something that’s supposed to hug a slim 7″ tablet. When I first wrapped my hands around the side grips, I was simply shocked at how hefty and cumbersome the whole thing felt. For those of you who say that even Nintendo’s Wii U GamePad tablet controller is too bulky, the Wikipad is going to feel like you’re playing with a GameCube console — in your hands.

I playtested the Wikipad with Hockey Nations (a standard team hockey game) and Dead Trigger (an anti-zombie first-person shooter), both of which come preloaded with the system. Neither game looked that amazing from a graphical standpoint, but they showed off smooth animations in 3D environments. The buttons seemed responsive enough; though, the overall girth of the controller made lifting my right thumb off the analog stick to hit a button an awkward affair.

The analog sticks themselves may have too wide a range of motion. For Hockey Nations, that wasn’t much of a problem, but for Dead Trigger, I could never aim at zombies’ heads precisely enough. At no point did I feel like I was playing an Xbox 360 or PlayStation 3 first-person shooter simply because the right stick had too much give in it. 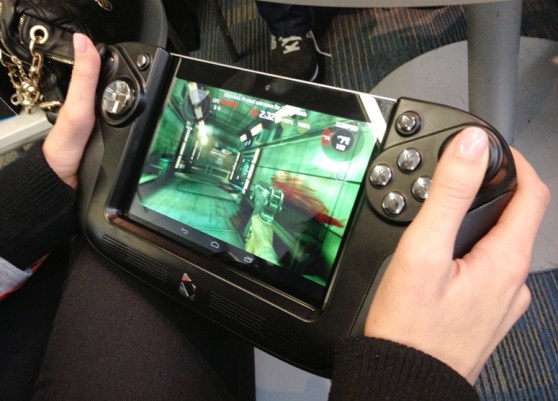 The tablet itself is elegant, but the controller is not. Perhaps I missed some settings that could refine the analog controls a bit, and maybe in the future, we’ll see a “Wikipad Slim” designed for those of us who don’t have thick-cut meaty mitts. But as it is, I’m not too impressed with this attempt at turning a tablet into a console.