When Google bought Quickoffice last year, it was making a very clear play for  the world of enterprise productivity, where Microsoft has traditionally reigned. 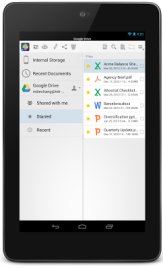 Now, Google’s pushing that effort forward with versions of Quickoffice for Android and the iPhone, which join the iPad version released last year.

With the app, Android and iPhone users can view, edit, and create Word, Excel, and PowerPoint documents, which can be then saved — naturally — in Google Drive.

That, of course, is bad news for Microsoft, which is taking its sweet time about releasing versions of its Office suite for Android and iOS. (Though it’s getting close, maybe.)