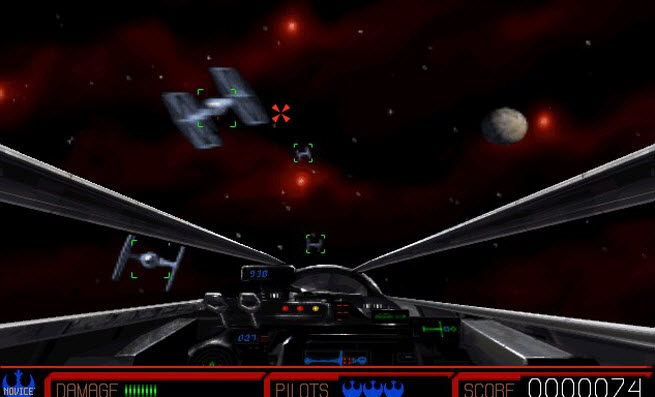 When Disney shut down LucasArts today, it brought an end to 30 years of experimentation in game development and publishing. But it wasn’t exactly a surprise to those watching the company, which has struggled to find direction in recent years.

Filmmaker George Lucas created LucasArts in 1982 as an expansion of Lucasfilm beyond the realm of movies. The game division collaborated with Atari on titles such as Ballblazer and Rescue on Fractalus in 1984. They were released on the Atari 5200 console under the Lucasfilm Games label, and versions for home computers debuted in 1985. It was a small start to what would become a sprawling business in Marin County, where Lucasfilm was initially based.

The company would come to have soaring hits and disastrous diversifications. Those mixed results persisted for more than 30 years, and the division’s long history finally came to an end today as Disney announced it was closing down LucasArts. In doing so, Disney is breaking the hearts of a lot of veteran gamers who are nostalgic for the old Lucas games.

“It is not a huge surprise,” said David Cole, an analyst at DFC Intelligence. “LucasArts always was a hard company to classify, walking a fine line between developer and publisher, but it mainly focused on games based on Star Wars and, to a lesser extent, Indiana Jones.”

It seemed like that those franchises were always enough to keep the game division alive, but recent years have been brutal on game companies, with big names such as THQ and Atari filing for bankruptcy protection. The onset of social, mobile, and online has created huge disruptions that have been hard for traditional game companies to navigate. Disney bought the social gaming company Playdom and the mobile game company Tapulous, and then it jettisoned most of its traditional PC and console game businesses. As such, it’s not a surprise that it is also canning LucasArts in the wake of the Disney-Lucasfilm merger — especially since so many recent Star Wars games weren’t developed at LucasArts.

“In recent years many of their big products were developed externally by BioWare [the Old Republic games], Traveller Tales [Lego products], Sony Online [the first Star Wars MMO, Galaxies] and others,” Cole said. “They weren’t doing much development, although Star Wars 1313 was getting buzz. So given that, it was hard to figure out what role they would play with Disney, who already has its own game division. Also, Disney has been backing away from big-budget games for some time.

“The main message is that large media companies are still leery of major involvement in the game business. Disney bought Lucas for Star Wars. LucasArts just came along with the package, but it didn’t really fit into Disney’s strategy.”

Tim Schafer, CEO of Double Fine Productions and a former LucasArts designer of games like Full Throttle, said, “Even though part of me felt this was coming, I’m still, somehow, shocked. I never thought that Lucas would actually shut down. I feel badly for all the talented people there. LucasArts was my first job in the industry. And sad to see all that history go away. And all that concept art. I’m going to be dumpster diving behind their offices for a while to see if I can find any old Full Throttle concept art.”

Meanwhile, Julian Eggebrecht, the former head of Star Wars gamemaker Factor 5 and currently the head of Touchfactor, said, “Of course we were all expecting it when Disney acquired George’s empire, but it’s still shocking news. I look back with a bit of sadness and remember arriving at Skywalker Ranch in August ’89, meeting the 40 developers making up Lucasfilm Games back then, and never disconnecting fully from the company again.”

As for lessons, Eggebrecht said, “Internal development is hard, and keeping a publisher thriving based on essentially one intellectual property is simply not feasible. LucasArts always suffered from a split personality – on the one hand the mandate by George to create new and original IP, on the other hand the realities of keeping a publisher alive and having to fall back more and more onto the only truly fiscally relevant IP, Star Wars, but without adequate funding and production. The amount of wasted money for internal development that went nowhere was mindboggling, especially knowing that our Rogue Squadron games were among the very few profitable ones.”

Eggebrecht is looking forward to the Star Wars license being available to external game developers.

“As a game director, and speaking for the team we would love to work in the universe again after all these years, and there is so much creative work and energy left to be unleashed onto gamers that this could be the start of something beautiful,” he said. “Ironically, thanks to Disney’s decision, the next chapter in the Star Wars: Rogue Squadron saga finally might be just around the corner.” 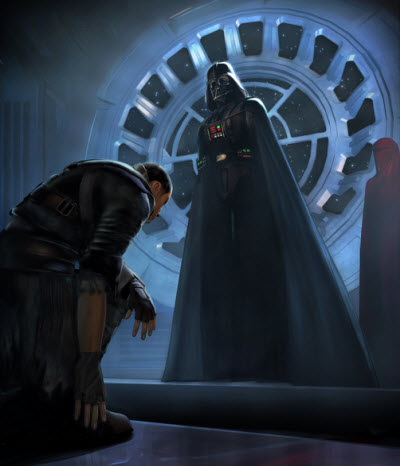 In 1990, Lucas reorganized the company and the game division became part of LucasArts Entertainment Company, grouped with Industrial Light & Magic and Skywalker Sound. These divisions were later separated into Lucas Digital, and LucasArts became the formal name of the games division. The company made a series of adventure games including Labyrinth, Zak McKracken, Alien Mindbenders, Indiana Jones and the Last Crusade: The Graphic Adventure, and Loom. The company scored a big hit with the adventure game The Secret of Monkey Island in 1990.

LucasArts also created a series of sequels that kept the business humming along and spawned seasoned game designers such as Tim Schafer, who worked on The Secret of Monkey Island and led the design of titles such as Maniac Mansion: Day of the Tentacle (co-designed with Dave Grossman), Full Throttle, and the noir adventure game Grim Fandango. Those were some of the most creative titles in the video game business. Schafer left in 2000 to start his own company, Double Fine Productions. That started a tradition whereby many game designers grew up with Lucas and spun out, creating a raft of game studio startups in the San Rafael, Calif., and San Francisco areas. Besides Schafer, other seasoned game executives who cut their chops at LucasArts included Jack Sorenson, Kelly Flock, and Dan Connors (founder of Telltale Games).

Ron Gilbert, a veteran of the Lucas adventure games, said in a piece today, “It’s hard for me not to be sad. I haven’t worked there since 1992, but it was still home to me. I grew up there. I learned just about everything I know about designing games there.”

In 1993, LucasArts started work on Star Wars games. The first internally published game was Star Wars: X-Wing, developed by Lawrence Holland and Edward Kilham. That game simulated combat in starfighters of the Rebel Alliance. Another blockbuster on the PC was Star Wars: Rebel Assault, a rail shooter game that had beautiful graphics and prerendered video that was state-of-the-art at the time. (I recall my jaw dropping when I saw the game being demoed in 1993). The title was one of many CD-ROM games that helped PC gaming hit new heights in the 1990s.

I also fondly remembered Star Wars: Dark Forces, a 1995 first-person shooter title that adopted the successful gameplay of Doom to the Star Wars setting. That also led to titles like Jedi Knight: Dark Forces II and other sequels.

LucasArts periodically tried to wean itself from its Star Wars dependency. The company created military simulations such as PHM Pegasus (1986) and Strike Fleet (1987). Those early titles were published by Electronic Arts. In 1988, it launched Battlehawks 1942, an air combat simulation that spawned a total of three games, including Their Finest Hour: The Battle of Britain (1989) and Secret Weapons of the Luftwaffe (1991). The team was led by Lawrence Holland, who later started the Totally Games studio. Totally Games went on to make games for LucasArts, including Secret Weapons Over Normandy in 2003. That title was one of my favorite games in the air combat simulation genre.

LucasArts also created titles like Outlaws in 1997 and the hilarious Armed and Dangerous (from Planet Moon Studios in 2003). 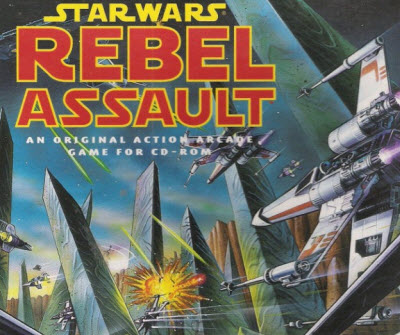 LucasArts returned to licensing its Star Wars games, publishing three games in the Lego Star Wars series from 2005 to 2007. That led to a big revival in Star Wars games. My own kids learned the plots of the Star Wars films from those games before they were old enough to see the movies. That led to a multigenerational money machine for LucasArts — for a time.

But in the new millennium, LucasArts itself acknowledged that it had become overly reliant on Star Wars sequels, which were diminishing in quality. That was particularly true for games based on the prequels, starting with the Star Wars: The Phantom Menace, released in 1999. To get out of its rut, LucasArts turned to BioWare, which created the well-received role-playing game, Knights of the Old Republic. In 2003, LucasArts released Star Wars Galaxies, a huge online game built in collaboration with Sony Online Entertainment.

Jim Ward, a marketer at Lucasfilm, took over the game business in 2004. He rebooted the company, cut staff, and published titles like Star Wars: Battlefront, Star Wars: Republic Commando, and Star Wars: Episode III. Under Ward, LucasArts commissioned Star Wars: The Force Unleashed, which was a major effort to extend Star Wars in the wake of the last films. The title had an original story that filled in some of the gaps of Star Wars lore, and it was a big success upon its release. But the game required huge investments in technology, and it led to an expansion in costs. LucasArts used some of the same cool physics technology in The Force Unleashed for new titles like Fracture, and it also branched out into non-Star Wars titles like Thrillville: Off the Rails and a couple of Mercenaries titles.

Ward left in 2008 for personal reasons and was replaced by Darrell Rodriguez, formerly of Electronic Arts. Rodriguez oversaw the release of titles like Star Wars: The Force Unleashed II. About a month before that title was released in 2010, he drastically scaled back the size of the internal game studio, which had since relocated to Lucas’ beautiful new headquarters in the former Presidio military base in San Francisco. The beautiful vistas weren’t enough to inspire the company’s own developers to create successful games. And LucasArts increasingly turned to partners. It teamed up with BioWare (and later its purchaser, Electronic Arts) to create the massively multiplayer online game Star Wars: The Old Republic. That title took more than five years and $200 million in estimated development costs to create, but it failed in its grand ambition of unseating Blizzard Entertainment’s World of Warcraft online game. 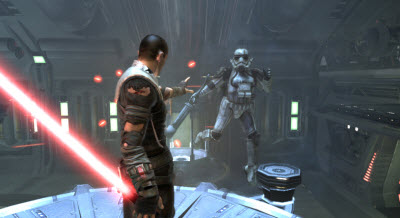 Rodriguez also left the company in 2010, after just two years in the role. He was replaced by Paul Meegan, a former Gears of War developer at Epic Games. In 2011, LucasArts and Sony Online Entertainment finally shut down Star Wars Galaxies. The revolving door in management continued to swing as Meegan left in August. He was replaced by Kevin Parker and Gio Corsi. Last year, LucasArts announced an ambitious new title, Star Wars 1313. But that game has evidently been shuttered. In October, Disney bought Lucasfilm for $4.05 billion, and the game division’s fate was sealed.

Some people remembered efforts such as the education-focused Lucas Learning, another interested but unsuccessful effort.

“This makes me extra-sad remembering Lucas Learning,” said David Thomas, a veteran game journalist and adjunct faculty member at the University of Colorado in Denver. “Whatever else you can say about George Lucas, he really did want to use media to make the world a better place. When they shut down Learning, I remember that there was talk about rolling the products into LucasArts in general. That really never happened. So, maybe the heart of LucasArts has been missing for years. Disney just put a bullet in the zombie’s brain.”