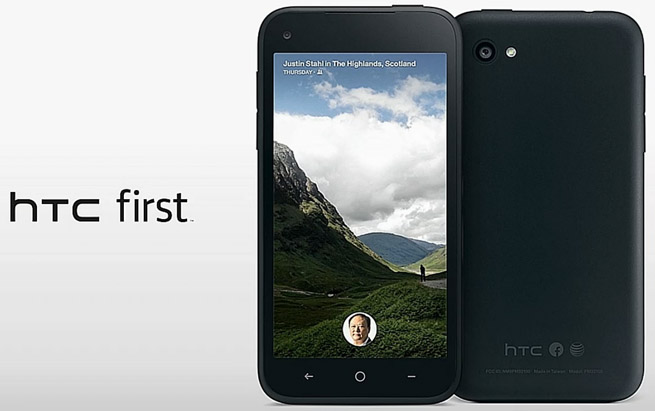 After many leaks, the first “Facebook phone” is finally here, and it’s fittingly called the HTC First.

Facebook has struggled over the years to make serious revenue from its mobile apps, but it recently started picking up momentum. But on top of smart third-party mobile apps, Facebook wants to make sure phones give its software top billing. So here comes the HTC First, a midrange smartphone with a custom skin of Android called “Facebook Home” that focuses on networking with your friends.

Facebook Home will be an experience available on several high-end Android phones (including the Samsung Galaxy S IV and HTC One) and starting April 12, but the HTC First will be the first smartphone to run it out of the box. On Facebook Home, the home screen shows your friends’ status updates and you can like and comment on those updates from there. It also lets you access Android apps from a customized app launcher.

“Our phones are designed around apps, not people, and we want to change that,” Facebook CEO Mark Zuckerberg said today at the event in Menlo Park, Calif. announcing the phone and software.

It has a 4.3-inch display and dual-core Qualcomm Snapdragon 400 processor. The device will come in four colors — red, blue, white, and black.

You can preorder the phone starting today from AT&T. (This link isn’t live yet, but should be soon.)