You would think that an accountant spends enough time in Excel, but one used his expertise in the Microsoft spreadsheet program to make a role-playing game.

Cary Walkin, a chartered accountant from Toronto, released Arena.xlsm earlier this year. It’s a full RPG that playable within Excel. It features over 2,000 random enemies, 1,000 random items, and eight boss encounters. Arena also has four different endings depending on how players tackle the adventure — that’s the same number of endings as Mass Effect 3.

GamesBeat asked Walkin what possessed him to develop an original game using the productivity software.

“I was taking a course for my MBA in advanced spreadsheet modelling,” he said. “Making a game seemed like a much better use of my time than option pricing valuation models.”

The accountant said that a light bulb went off in his head when he discovered that he could make buttons within spreadsheets.

“That was the day I realized that I had to make a game,” said Walkin.

For the basic design structure, Walkin taught himself by playing other games and watching the informative Extra Credits webshow from Penny Arcade. 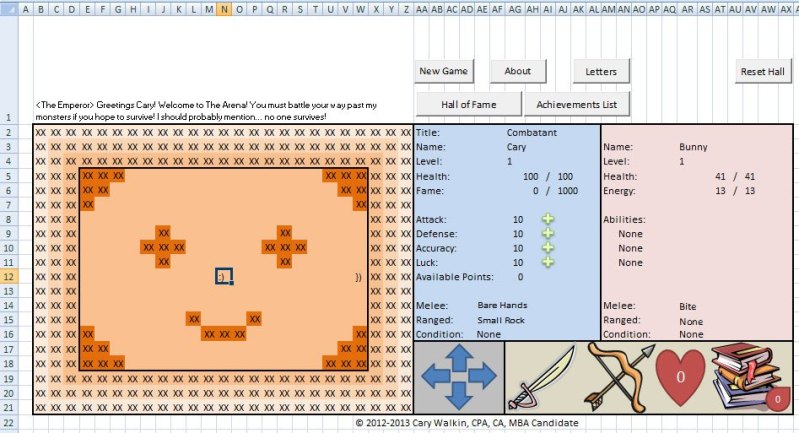 Walkin is currently an MBA candidate at the Schulich School of Business in Toronto. Despite the extensive time spent in Excel both for his area of study and this game, he spends his free time maintaining spreadsheets.

“When I play games outside of Excel, I am usually using spreadsheets in games like Eve Online,” he said.

So as great as accounting is, would Walkin ever consider a career developing games full-time?

“Absolutely. I have a passion for video games, so anything involving video games is better than taxes!”