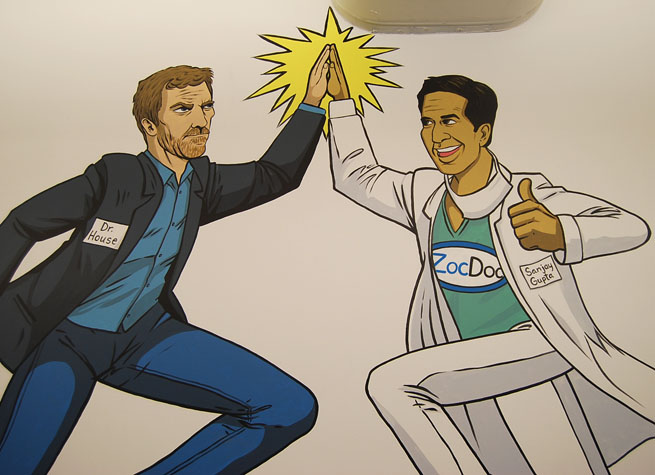 This is the latest in a series of VentureBeat stories about startup culture. This week, our reporter spent time with ZocDoc in New York, a stark contrast to several San Francisco startups we’ve covered.

ZocDoc’s appointment booking service (and extras like online check-in) is in more than 35 major metropolitan areas, and it covers 40 percent of the U.S. population. It doesn’t reveal its number of bookings or the number of doctors using the service, but a cursory look at listings in cities like Chicago or Boston shows hundreds of medical professionals, who each pay $300 a month to use ZocDoc.

But there’s a lot more happening inside ZocDoc that’s helping the company push forward. ZocDoc promotes a specific culture to attract the best employees and enable those workers to do their jobs effectively.

In the picture below, you can see the seven values ZocDoc focuses on promoting: “patients first, great people, speak up, own it, us before me, work hard, make work fun.”

“Health care is the biggest problem facing our generation,” CEO and founder Cyrus Massoumi told me. “To change that is very ambitious. … To accomplish it, we try to have ‘humble ambition’ or ‘hum-bition.’ And that permeates everything we do.”

After touring the office and talking with several ZocDoc employees, including Massoumi, I noticed a few ways that ZocDoc is creatively approaching problems like growing pains and subordinate employees. Here’s what I took away from the visit. 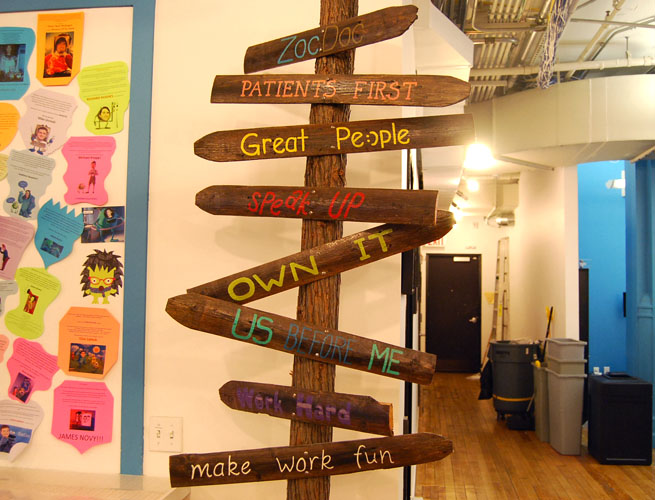 Above: The values ZocDoc emphasizes.

Recruiting has become one of ZocDoc’s the most pressing issues. ZocDoc has more than 400 employees in offices in New York, Phoenix, and India, and it plans to keep hiring like crazy to keep on growing. On top of revenue ZocDoc generates from its customers (doctors), it’s also tapping the $95 million in funding it has raised from DST Global, Goldman Sachs, Khosla Ventures, and others to keep the engines pumping. Its newest office is in the Phoenix area and the company claims it will hire more than 60 more people for that office alone before the end of 2013.

ZocDoc’s space in New York has gotten crowded enough that employees are now flooding over into the fourth floor of its SoHo-based building. (It also shares that building with other major NYC startups Foursquare and Thrillist.)

“We’ve been in the same space for three years, and we started out with a quarter of this floor,” Karsten Vagner, ZocDoc’s director of people and its third employee, told me.

A hallway in the New York ZocDoc office contains a row of seven rooms, all dedicated for interviewing new employees in person, by phone, or via Skype. When I viewed the office, the rooms were nearly empty, but multiple employees said that was unusual and on the majority of weekdays applicants fill most or all of the rooms.

Massoumi says he chiefly looks for people that will care about fostering the community of his workers, and he’s willing to look anywhere for these employees.

He uses a story to show how serious is about this. Early in ZocDoc’s history — about three years ago — he was visiting Chicago for business. At a pizza restaurant, Massoumi liked the waitress that was helping his group so much that he asked her to interview with ZocDoc. Massoumi said that she put customers first and dealt with their problems more effectively than most waitresses he’d ever seen, so he had to see if she’d come work for the company as its office manager.

“We hire for intrinsics over experience,” Massoumi said. “We need them to share our values more than anything else. … Every employee we have is better than the average employee.”

She is still ZocDoc’s office manager in New York. 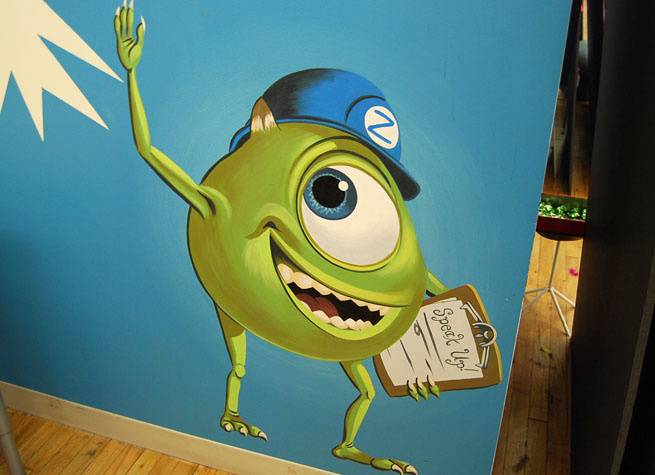 Above: Mike from Monsters Inc. with a ZocDoc hat.

Clearly, ZocDoc is trying hard to recruit and fill a lot of key roles. But to get those employees on board, Massoumi believes you have to give those recruits an unusual incentive: the freedom to tell bosses — sometimes loudly — that they are wrong.

“If you want the best people, you have empower them to speak their minds,” Massoumi said. “You can speak your mind here without your job being in jeopardy.”

The call to “speak up” is so prominent that people are criticized if they ever admit later to thinking another approach would have been better but did not say anything.

“Part of your job is to say what’s wrong,” Vagner said. “I don’t want people on my team who just nod along.”

Additionally, employees are able to book time with Massoumi to discuss issues or ideas. That’s made his schedule a bit hellish (it took more than two weeks for me to get him on the phone), but he cares about his employees’ thoughts enough that he’d rather be busy than not have the time to talk to them. “Office hours” sessions vary between 15 minutes up to two hours.

Massoumi also has an initiative to do lunch once a week with the newest New York employees. “I need to know every member of my team,” Massoumi said.

While employees speak their minds about things, something that they don’t question is the operation’s leanness. Even with the $95 million in funding, the company still acts like an early-stage startup.

Massoumi illustrates this by telling me about the chair he has for guests in his office. The chair’s nickname is “Bouncy” and has a broken piece that makes it sink when people sit down in it.

“It’s been broken for four years,” Massoumi said. “It used to surprise people, but I think they’ve come to appreciate it.” 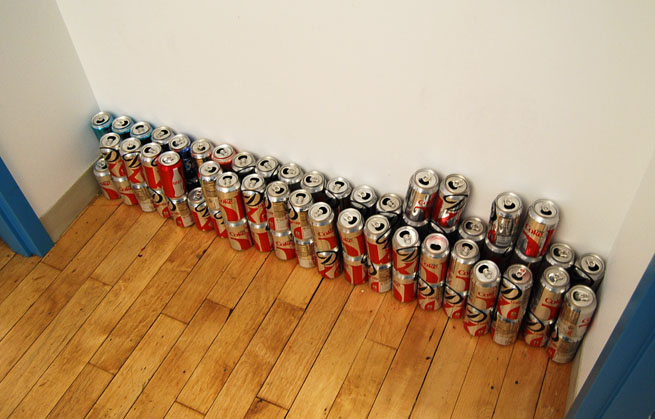 Above: Diet Coke cans stacked in a hallway.

Outside of pushing values, another thing that seems to be helping fuel ZocDoc’s growth is the staff’s love of soda. Like many startups, caffeine helps drive employees who work long hours, but there seems to be a special affinity for the stuff; it’s a guilty pleasure among employees driven to make other people’s lives more healthy.

While water and coffee are the most popular employee drinks, the office is also well stocked on soda. When I toured the office, empty Diet Coke cans were stacked at the end of one hallway. I found it humorous that one of the most prominent health-tech startups consumes so much soda, and I pointed that out to Massoumi. (Admittedly, I’m a soda addict myself, so I wasn’t trying to judge.)

“We’re a health startup, I know, and we do our best to reflect a healthy lifestyle,” Massoumi said. “We do have one member of our exec team who drinks a lot of Diet Coke, but I haven’t had a drink of soda in 10 years.”

The company also offers beer and wine to employees on Fridays.

Finally, the last thing I took away from speaking with ZocDoc employees was the sense that they could actually take time off without getting a hard time from management. Startups have such a fierce mentality that taking time off can be a negative — and taking too much time off could get you fired.

“I think unlimited vacation is unusual, but it’s also valuable,” Massoumi said. “It taps into ownership. It’s our job at ZocDoc to improve health care in America, and our people understand that.”

“I worked a lot to make sure everything was covered,” Vagner said. “There’s a clear expectation that you do your job and do it well. We believe taking time off doesn’t have to interfere with that.”

Check out more photos of ZocDoc’s office below.

All photos by Sean Ludwig/VentureBeat