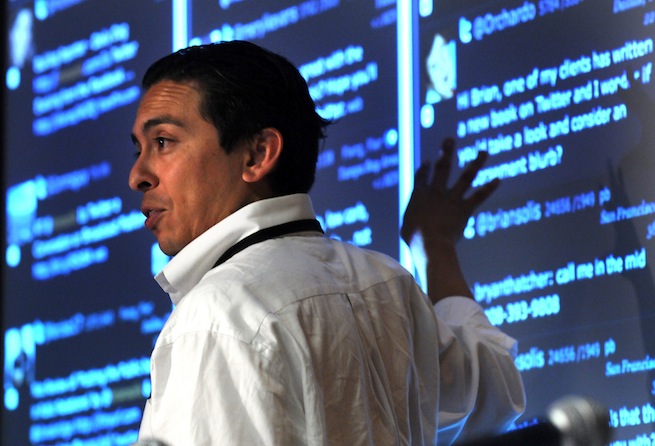 Self-described digital anthropologist Brian Solis has a habit of being in the right place at the right time.

During the late 1990s, Solis attended all the right events, voraciously blogged, and snapped thousands of photos of Silicon Valley’s newly-minted technology elite. He quickly became one of the original “super connectors,” acting as a bridge between tech and digital media influencers around the world.

But it’s far more than good fortune and a strong network — Solis is a futurist of sorts, and has a knack for recognizing trends. He was among the earliest proponents of the social media craze, and founded creative agencies to help businesses utilize Wikipedia, Facebook, Twitter, LinkedIn and the rest.

All this spiralled into an events career (a keynote speaker at SWSX, Solis recently interviewed Shaquille O’Neale, who has become a firm friend), a high-powered analyst gig at Altimeter Group, and a series of bestselling novels on the business of social media.

I caught up with Solis in the weeks after the release of his new book, “What’s the Future of Business, Changing the way businesses create experiences.” As he explains, the book offers honest insights into how businesses can reach “Generation C” (the C stands for connected), and the most common mistakes to avoid.

VentureBeat: So what’s the new book about?

Brian Solis: This isn’t a traditional business book. The subtitle is, “Changing the Way Businesses Create Experiences” and to change experiences takes something special. See, at the heart of new technology is people, the connections they make and the experiences they share in public. These shared experiences represent the future of branding, shifting marketing from a position of impressions to focus on expressions. While it might sound a bit abstract, it is these shared experiences that are starting to match and even surpass traditional branding and media.

“Generation-C” doesn’t necessarily take to Google first to research or make decisions wherever they are in the customer lifecycle. They rely on the shared experiences in the form of Q&A, reviews, and shared content to inform or validate decisions.

VentureBeat: So how can businesses reach this “Gen-C”?

Solis: Websites aren’t the most efficient or effective means of deliver to Gen-C, especially when most of them use smart phones or tablets while they’re on the go. They want information quickly and they want it personalized. Call it the lazy web if you will, but if companies are investing in SEO and SEM to feed information to people who are captive in search mode, then they will also have to invest in the experiences they want people to have and share so that in the real world. And right now, those shared experiences are largely reactive and undefined by businesses.

VentureBeat:  Almost as interesting as the book itself is your efforts to promote it. Tweets from Donald Trump and Oprah! WTF?

Above: Shaq is an avid supporter of the new book.

Solis: While I have had the opportunity to work with many celebrities in the past, the post in which you’re referencing was more of an event to call attention to a controversial online app, LetMeTweetThatforYou. I used the service to demonstrate the potential liability of faking Tweets and how we each need to re-think fact checking before we retweet or share.

VentureBeat: Would you consider a Kickstarter campaign for your next book?

Can you believe that this is my fifth book and my third with Wiley? In 2012, business author Seth Godin took to Kickstarter to raise money for The Icarus Deception. I believe he was seeking somewhere in the neighborhood $40,000 and ended up pulling in $287,000. While Kickstarter is an interesting option, it does introduce production, distribution and marketing responsibilities that require careful consideration.

The Wiley team allowed me to assume creative control where I acted as author and art director. I brought in the team from Mekanism (the creative agency behind the Pepsi and Beyonce commercial at this year’s Super Bowl) and none other that @gapingvoid and his team at Social Object Factory to help me turn a book into an analog app.

VentureBeat: How did you first make a name for yourself in the Valley? You were a blogger / photographer/ chronicler of sorts?

Solis: It goes back to the mid-90’s when I was an experimental marketer in the world of new media. I grew up as an aspiring programmer in Los Angeles. But like many, I recognized the importance Silicon Valley and moved to Northern California in 1996 to pursue my passion of learning how technology was impacting culture. I was infatuated with message boards and forums and connected societies that could make and move markets.

I tested theories with large brands and startups with fascinating results. I decided to launch a lab in 1999 called FutureWorks that helped prove and test new ideas for technology and consumer electronics clients and over the 12 years I ran that company, we helped thousands find success online in addition to or completely outside of traditional media programs.

VentureBeat: How did you build the “Brian Solis” brand? 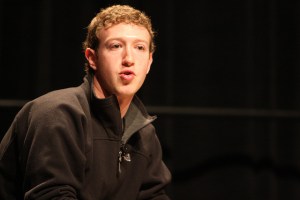 Above: One of many images of Facebook’s CEO by Brian Solis

Some time in the mid 2000s as Web 2.0 was finding its footing, I started to practice what I was preaching. I started blogging at briansolis.com to share the experiments and lessons learned in new media. I also launched bub.blicio.us to spotlight the changing world as I saw it. I thought that pictures, video and words were equally important. I also launched a video series called TechSoup, and spent time mastering the art of photography. A little known fact is that many of my pictures of notable entrepreneurs, investors and celebrities are often used in media of all sorts. To this day, more than 3 million people have viewed these pictures on Flickr.

All of this contributed to who I am today. The blogging led to books. The pictures led to exposure in some of the world’s largest media outlets. The videos became the entryway to launch Revolution a popular online series that I host, which has featured incredible guests such Katie Couric, Billy Corgan, Shaq, Adrian Grenier, among others.

VentureBeat: What are the biggest social media faux-pas you see businesses make when they try to market to “Gen C”? 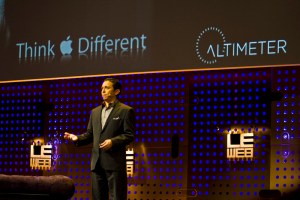 Solis: As an analyst, this question seems to be the focus of my work over the last several years.  This comes back to the inspiration behind my last book. The problem is that most of us are merely reacting to technology and not harnessing it to take us where we want to go. We understand its importance but we don’t truly understand why it’s important to our business.

While everyone thinks they already know that technology is changing behavior, the reality is that assumptions and blind faith are still playing a role in how businesses are approaching these changes. Many experts believe that mobile and social networks are the new channels for engagement. They place their bets on the number of people each network boasts, as well as by the amount of attention press and bloggers pay to what’s hot.

However, experts cannot tell you the role certain networks play in the customer’s decision- making cycle. Nor can they pinpoint the economic impact of activity or conversations on the business before, during, and after the transaction. That is why the answer to the question of what the return on investment (ROI) of these initiatives is elusive. Instead they come up with new jargon to support their blind faith.

VentureBeat: So technology isn’t the be all, end all?

Solis: Technology is not the answer, it’s part of the answer. This is one of the reasons that I am an aspiring digital anthropologist. Without an understanding of behavior and the role technology plays in our personal and professional lives we will consistently find ourselves responding to it instead of putting it to work for us.

And in a connected society, one where people believe their experiences are paramount, what people share and say about you becomes as or more pervasive than what you say about you.