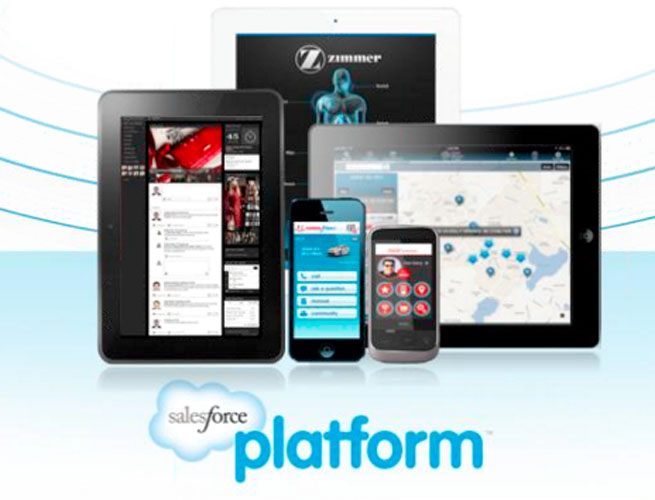 The huge growth opportunities for PaaS providers like Force.com and Heroku and the muscular rise of native mobile apps are no doubt pushing Salesforce to reach out more frequently than ever to developers who might use its platform services and build for mobile. Salesforce already places a heavy emphasis on mobile apps and mobile access to Salesforce data, but this new move powers up its tools focused on enterprise developers.

First up, Salesforce now offers open-source “packs” that are designed to let JavaScript web developers build HTML5 or hybrid mobile apps. These packs give devs access to Salesforce Platform “REST APIs” through three JavaScript frameworks: AngularJS, Backbone.js, and jQuery Mobile. Ideally, it makes a web developers’ life easier if he or she wants to develop on mobile as well.

“These are millions of JavaScript developers out there,” Salesforce Platform VP Scott Holden told VentureBeat. “We want these folks to build mobile apps — specifically ones that access Salesforce data.”

Second, Salesforce has revamped its mobile SDK to version 2.0. The open-source SDK makes it easier for enterprise-focused developers to connect Salesforce data to iOS and Android mobile apps regardless if those apps are built natively, hybrid, or HTML5. The SDK also helps give devs access to geolocation data and a smartphone’s camera so employers or enterprise app makers want to add a location data layer or have the app take pictures. Additionally, the SDK has libraries for things like secure offline storage and authentication.

The SDK update is focused on Force.com users rather than Heroku users, but the packs could be used for either set. Holden said the number of developers using the two PaaS providers is about evenly split, although Heroku hosts many more apps than Force.com.

On a final note, Salesforce is doing more two things outside of new products to reach out to enterprise developers. First, it is opening up what it dubs the “Salesforce Mobile Accelerator Program,” which will “provide training and best practices on reference architectures, mobile architect curriculum, and consultant certification.” The program counts companies including Appirio, Bluewolf, Deloitte Consulting, and Detroit Labs as partners.

Salesforce’s developer community will also host a series of events during the week of April 22 to give hands-on time with the latest Salesforce mobile services for developers, including the new SDK and the open-source packs.