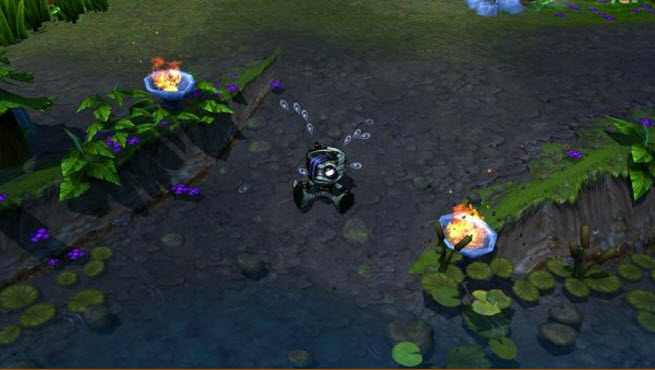 Riot Games’ League of Legends has clearly overtaken World of Warcraft as the most popular game in China’s Internet cafes, according to a new report by market research Niko Partners.

That’s a significant change. Activision Blizzard’s World of Warcraft has dominated the online games market for a long time in China. League of Legends, a fast-and-frenzied multiplayer online battle arena game (MOBA), debuted in 2009 and has been gaining on World of Warcraft for a while.

This also show how free-to-play games have supplanted subscription models and other traditional sales methods, especially in Asia.

In March, League of Legends was launched 75,930 times in the cafes monitored by Niko Partners, and gamers played it for 83,307 hours. By comparison, World of Warcraft was launched only 6,463 times and played for 6,027 hours.

Based on data from China’s Internet cafes, Tencent’s Cross Fire shooter game is also popular, with 77,878 launches and 17,889 hours played in March, Niko said. Lisa Cosmas Hanson, the president of Niko Partners, said that first-person shooters and MOBA games are tailor-made for Internet cafes, where players are younger and tend to play for hours at a time.

“Tencent [which owns the majority of Riot Games] is the dominant online game operator, with about 40 percent market share in PC online games,” Cosmas Hanson said. “You can see in that I-cafe data that the fact that Tencent has so many hot non-RPG games is a plus, though MMORPGs are still very popular in China. Many of the highly anticipated PC online games in 2013 are MMORPGs.”

The data is collected from more than 30,000 PCs from more than 400 Internet cafes throughout China. The PCs are monitored 24 hours a day and seven days a week, and they are spread through a variety of cities in China. Niko collects data such as the top MMORPGs, the top casual games, the top web games, and a variety of other information on the Chinese game market. 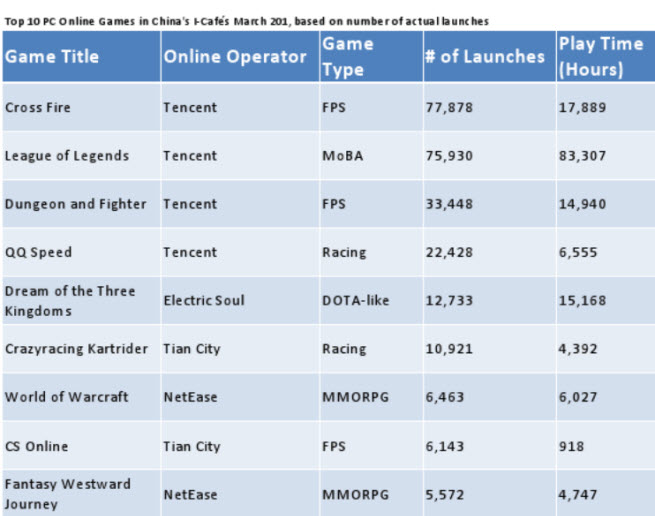