PC shipments fell off the proverbial cliff in the first quarter of 2013, according to IDC, with their biggest drop ever in recorded history.

That might sound a little melodramatic, given that the recorded history of PC shipments only goes back to 1994. But with a drop of 13.9 percent — almost double the expected 7.7 percent — to only 76.3 million units, the first quarter of 2013 has been a disaster for traditional PC manufacturers. 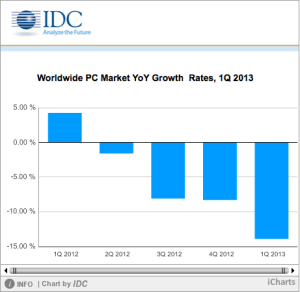 Even a new version of Windows, once a guaranteed shot in the arm for PC shipments, failed to stimulate demand. Quite the opposite.

“At this point, unfortunately, it seems clear that the Windows 8 launch not only failed to provide a positive boost to the PC market, but appears to have slowed the market,” Bob O’Donnell, an IDC vice-president, said in a statement.

O’Donnell says that with its radical user interface changes, subtraction of the familiar Start button, and extra costs that come with Windows 8-equipped PCs that take advantage of its touch capabilities “have made PCs a less attractive alternative to dedicated tablets and other competitive devices.”

In the U.S., this marks the tenth consecutive quarter of year-on-year declines, and quarterly shipments reached their lowest level since early 2006. Europe was down as well, and even growing China and the rest of the Asia Pacific region dropped 12.7 percent, the first double-digit decline in PC shipments there.

HP remains the top PC vendor globally, IDC said, but its shipments fell 23 percent year-over-year, and it was almost surpassed by Lenovo, which astonishingly had double-digit growth in a sinking market. Dell dropped 10 percent as well, and Acer, Asus, and Toshiba also dropped somewhat.

Even Apple, which has seen strong growth in recent years, particularly in laptops, had shipments decline 7.5 percent to 1.4 million.

IDC seems interested in blaming Windows 8, but the more likely culprit is surging sales of tablets, which some analysts are including in “PC” shipment numbers. In fact, some analysts believe that this year is the year tablet sales will outpace traditional PC sales, with quarterly sales of 55-60 million.

Given this quarter’s numbers, it looks like the crossover point could be as soon as the next three months. But whether that happens or not, big changes are in store for PC vendors:

“The industry is going through a critical crossroads, and strategic choices will have to be made as to how to compete with the proliferation of alternative devices and remain relevant to the consumer,” David Daoud, IDC Research Director, said in a statement. “Vendors will have to revisit their organizational structures and go-to-market strategies, as well as their supply chain, distribution, and product portfolios in the face of shrinking demand and looming consolidation.” 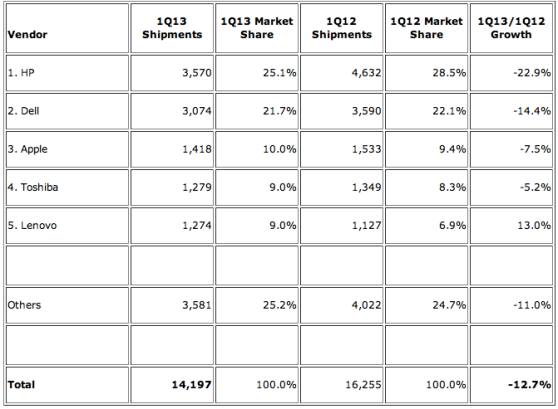