Games are extremely demanding when it comes to using computer power, and so it’s hard to create a chip that can handle a huge amount of processing required in games and do that with low power consumption at the same time. This is why mobile graphics have lagged far behind PC graphics. 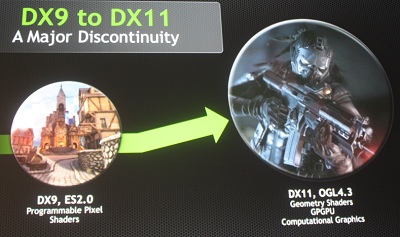 In doing so, Nvidia engineers have had to shrink the size of the Kepler chip and reduce its power consumption from dozens of watts to hundreds of milliwatts. The new chip will be able to play high-end PC games such as Battlefield 3, pictured in the video below. That means that Kepler Mobile could enable mobile devices — smartphones and tablets — to run DirectX 11 graphics, with high-end features such as advanced shadows and lighting. To date, this hasn’t been possible — by a long shot — on mobile devices. 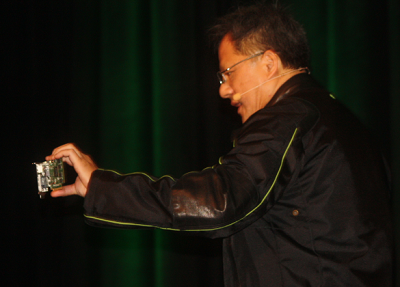 “We want to get multiple years ahead of the competition,” Huang said. “It was worth the sacrifice.”

Huang said the company made a strategic decision to delay other priorities in order to move Kepler Mobile forward. He showed in a video the best that a newest generation iPad can do. Then he showed Battlefield 3, a high-end PC game, running on Kepler mobile.

It had features such as high-dynamic-range lighting, while the iPad is capable of doing graphics that are “vintage 1999,” Huang said.

In the video below, the first demo shows what the iPad can do, and it cuts over to the Kepler Mobile video after that.

IMAG2703 from VentureBeat on Vimeo.